(RNS) — The president of the National Baptist Convention, USA, closed the annual session of his denomination this week with critiques of cultural conflicts and Christian nationalism.

“I am pro-life — always have been — but I’m puzzled,” the Rev. Jerry Young said in the presidential address at his denomination’s virtual annual session on Tuesday (Sept. 28). “What is more private than what happens to a lady in her own body? If you can mandate her not to have an abortion, why can’t you mandate her to wear a mask? It seems incongruent to me, and it seems hypocritical on the face of it.”

Young’s 45-minute address pointed to recent political turmoil in America, including a controversial Texas abortion ban. The leader of the historically Black denomination preached about the need to “confront our faults” in the church and the country and noted the Jan. 6 insurrection where crowds stormed the Capitol as an example.

“I am not bothered by those who were in the secular arena, but I’m told there were pastors and preachers and members of churches across the country who took that position because they did not like the outcome, because it wasn’t politically correct,” he said of protesters upset with Joe Biden’s defeat of President Donald Trump.

“People can go to church, and know for sure, in their own hearts, that they are filled with hatred and bigotry and prejudice — listen, my brothers and sisters — and feel comfortable, under the auspices of the Word of the living God. There is something drastically wrong with that picture.”

Young and other leaders of the two-day NBCUSA annual session, which included reports from its boards and commissions, focused on health concerns and issues of social justice as members gathered virtually.

“Here we are in America, in the midst of a great pandemic, and there are Christians who are arguing about their individual right not to be vaccinated and not to wear a mask and saying, ‘It’s my right to tell my children what I want. This is mine and the Bible gives me that right,’” Young said in his address. “My brothers and sisters, I want to tell you, you simply cannot be right with God if you do not also love your neighbor.”

At a social justice forum held via Zoom earlier on Tuesday, he spoke of an urgent need to continue voter education and access.

“We got African Americans running around right now saying ‘my vote does not matter,’” he said during the discussion that included NAACP leaders. “That’s why we ended up with Trump in the White House. Because African Americans said, ‘My vote won’t matter.’ I guess you figured out it matters now, right?”

However, Young, who uttered a closing prayer on the first day of the virtual Democratic National Convention in 2020, disagreed in his address later that evening with those who think “that somehow one party in the political arena is Christian and the other is unChristian.”

In the forum, he pointed to a 2020 document jointly produced by his denomination’s Social Justice Commission and the NAACP that encouraged greater voter registration and participation and said its message needs to be repeated for the 2022 election by distributing it to NBCUSA churches in the coming months.

“We cannot afford to allow anybody to deny us the right to participate in the political process,” Young said. “We’re going to make sure that every church in National Baptist has a copy of this document.” 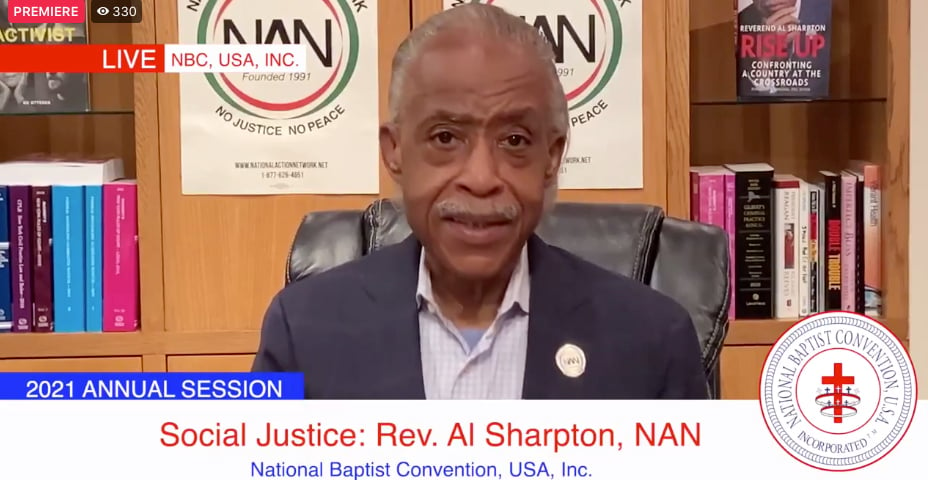 The Rev. Al Sharpton, president of the National Action Network, urged NBCUSA members to work with the commission on pushing for enhanced voting rights.

“There is nothing controversial about that, nothing radical about that,” he said, prior to Young’s presidential address. “We pay taxes. We should decide who is going to decide how those taxes are spent.”

During the meeting, the NBCUSA announced a new partnership with the Academy of Nutrition and Dietetics that seeks to reduce health disparities between African Americans and other U.S. populations. The denomination and food experts will jointly provide resources about health conditions such as diabetes, high blood pressure and obesity.

As the online opening session began, a video played with an academy-registered dietician offering “eat right” tips and suggesting that church members “try one new fruit, vegetable or whole grain every week” and consider steaming rather than sautéing vegetables.

“African Americans suffer disproportionately from COVID-19 deaths and other nutrition-related health disparities,” Young said in a statement about the partnership. “We hope to achieve health equity for members of all of our congregations.”

Earlier in the month, the denomination was awarded a $750,000 grant from the National Institutes of Health’s “All of Us” Research Program to help enhance recruitment of researchers and participants who have been underrepresented in biomedical research.

Young said in a statement that the grant will expand the work of the denomination’s health ministry and could increase the representation of people with sickle cell disease — which disproportionately affects African Americans — in the research database.

Religion Hub
Is social distancing unraveling the bonds that keep society together? 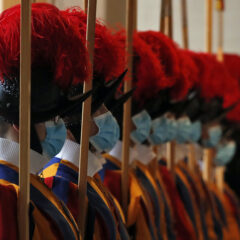