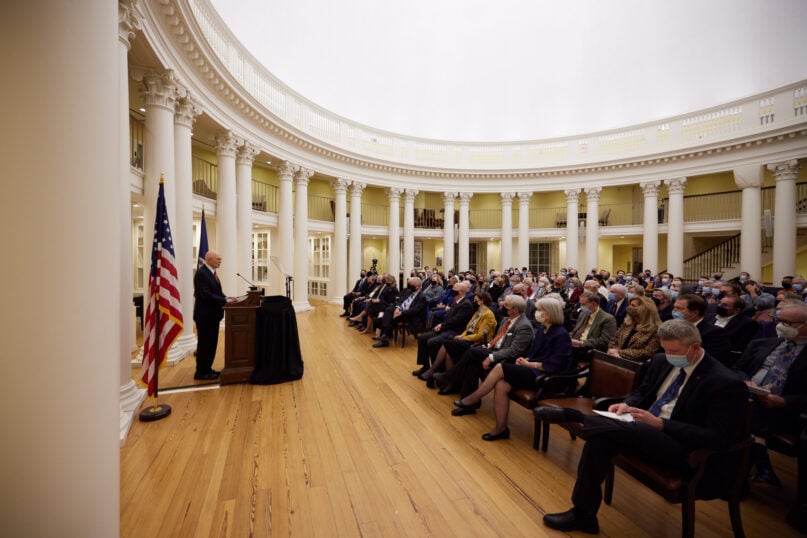 President Dallin H. Oaks of the First Presidency delivers the 2021 Joseph Smith Lecture in the Dome Room of the Rotunda at the University of Virginia on Nov. 12, 2021. Photo © 2021 by Intellectual Reserve Inc. All rights reserved.

(RNS) — On Friday (Nov. 12), Dallin H. Oaks, a counselor in the First Presidency of The Church of Jesus Christ of Latter-day Saints, spoke before a small crowd in the University of Virginia Rotunda building and said his remarks constituted “the most difficult address I have ever undertaken.”

He did not make clear why he found it so difficult, though I may have an idea.

I don’t think the difficulty was in the address itself. It was a balanced speech, a careful speech. In it, Oaks charted a path forward for both the advocates of LGBTQ+ equality and those Oaks called “people of faith.” (Incidentally, it’s worth pointing out those are not mutually exclusive groups, which his language seems to suggest.) He said:

He called repeatedly for greater listening from both sides, advocated the peaceful resolution of political conflicts and bemoaned the growing polarization in the United States. Nothing new there. He criticized Kim Davis, the Kentucky clerk who refused to issue marriage licenses to same-sex couples after the Supreme Court’s Obergefell decision; he also criticized state officials who had tried to circumvent their states’ laws against same-sex marriage in the days before Obergefell made it legal everywhere.

The speech itself modeled the kind of pluralism Oaks said is the rule for U.S. society. He paraphrased the Quran and quoted LGBTQ activist Troy Williams positively (now, that was a surprise!), thereby demonstrating the point of the speech: We can have respect for people whose religious and political beliefs are different from our own.

So what was controversial?

Not much in the speech itself. Frankly, it wasn’t all that different from other addresses he’s given lately, particularly his last two General Conference talks. In October 2020, Oaks issued a pointed statement that members of the church “must forgo the anger and hatred with which political choices are debated or denounced in many settings.” He made a further point of saying that Latter-day Saints “peacefully accept the results of elections,” which seemed a direct reference to then-President Donald Trump’s refusal, in the weeks leading up to the presidential election, to promise to do that. 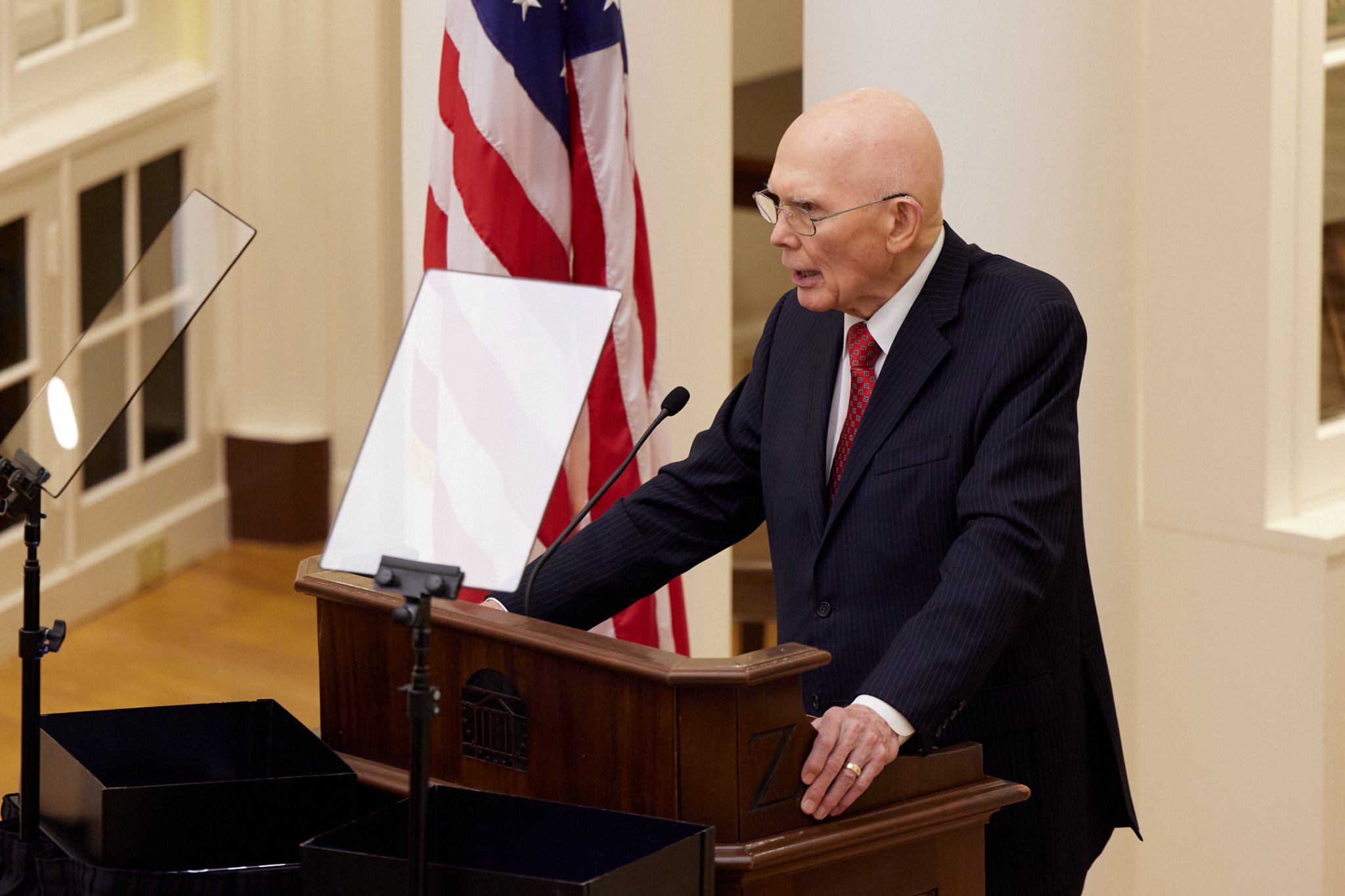 President Dallin H. Oaks of the First Presidency delivers the 2021 Joseph Smith Lecture in the Dome Room of the Rotunda at the University of Virginia on Nov. 12, 2021. Photo © 2021 by Intellectual Reserve Inc. All rights reserved.

And in the April conference this year, Oaks surprised many by taking the opportunity of his Sunday address — on Easter, no less! — to issue a politically motivated sermon. He took aim at the Jan. 6 insurrection and its supporters, noting that “sovereign power of the people does not mean that mobs and other groups … can intervene to intimidate or force government action.” Citizens’ loyalty, he said, was to the nation and its Constitution, not to any particular officeholder or authoritarian leader. (He did not name Trump, but he did not have to.)

TO READ: Mormon leader blasts some right-wing US extremists, but will they know he’s talking to them?

Last week’s UVA speech was firmly in the same vein of both of those recent addresses, so it’s not the speech itself that I think Oaks found difficult, even exhausting. It’s not recorded in the church’s official transcript of his speech, but he actually stopped in the middle, telling the audience, “I think at this point, I’ll take a brief sitting break and invite you to enjoy a brief standing break.” He resumed the speech after a short recess. He also wiped his face multiple times during the speech and just appeared … well, more uncomfortable than I ever recall seeing him.

I think it has become the “most difficult” because he recognizes how few Latter-day Saints are listening. He’s become exhausted by the unprecedented rancor and worried about the tendency of each side to vilify the other.

The deafness is on both sides. Many on the left have long since stopped paying attention to the careful distinctions Oaks was trying to make — saying the church has a right to religious freedom in its own teachings and practices but is also committed to following the law of the land. Liberals, burned by the church’s repeated harmful actions toward the LGBTQ+ community — from its extensive politicking in California in 2008 to its terrible, short-lived policy that denied baptism to children of same-sex couples — are not likely to trust the institution or its leaders on LGBTQ+ rights anytime soon.

And conservatives, drunk with a particular approach to “freedom” that focuses wholly on the self without any consideration of neighbor or the greater good, aren’t listening either. That’s become especially clear during the pandemic, when conservative Saints in the U.S. have pushed back vociferously against church leaders who advised them to mask up or get vaccinated to curb the spread of COVID-19.

Oaks touched on this during the brief Q&A that followed his address. One of the questions from Judge Tom Griffith was about how we are “living in a time of acute political polarization.” In his response, Oaks noted he had “observed that some of our most — I’m looking for the right word — vexing problems come from mixing science and politics. What I see happening in connection with the masks that we wear, the inoculations that we receive, is a certain number of people who get their direction on matters of science from political authorities.”

He said that was something “to be warned against,” and that in the LDS church, leaders have “tried to warn our members not to make decisions about vaccinations based off of political loyalties or considerations, but on scientifically provable evidence, not political slogans.”

He added that the church was not always successful at that, “but we’re trying.” He said he is concerned about the rise of “false ideas” and misinformation online, though he doesn’t know a way to regulate that without infringing upon people’s freedom of speech.

In all, it was an excellent and balanced speech by a lifelong lover of the Constitution who is trying to warn America of the dangerous path it’s headed down. The question is whether anyone inside or outside the LDS church is actually getting the message.

Mormon leader blasts some right-wing US extremists, but will they know he’s talking to them?

Will the LDS church condemn the right wing’s US Capitol violence?

At the Capitol, we saw the best and worst of US Mormonism