(RNS) — One of the most consequential legal terms in the 21st century may be “religious freedom.” As my colleague University of Cincinnati political scientist Andrew Lewis discusses in his most recent book, “The Rights Turn in Conservative Christian Politics,” religious conservatives have begun centering their legal strategy on the rights of individuals to practice their faith without fear of repercussions from the government.

The most notable example of this strategy was the Masterpiece Cakeshop v. Colorado Civil Rights Commission, in which two men sued the owner of a Colorado bakery who refused to create a cake for their wedding. The shop’s defense rested on the fact that the baker had deeply held religious beliefs about marriage and that to be asked to violate those beliefs by serving two people of the same sex would encroach upon the baker’s religious freedom.

But liberal Christians are not above using religious freedom arguments themselves. Just a few weeks ago, St. Timothy’s Episcopal Church in Brookings, Oregon, filed a lawsuit because the city passed an ordinance restricting the number of free meals each week that organizations in residential areas could give to people experiencing homelessness. The law was passed after neighbors complained about disruptions caused by St. Timothy’s meal ministry.

RELATED: How religious is your average 22-year-old? A new golden age of survey data opens a door

The basis for the church’s lawsuit is that the city’s ordinance makes it illegal for congregants to practice their religious beliefs. Like Masterpiece Cakeshop, the church contends that its actions are protected by the First Amendment’s “free exercise” clause.

It turns out that support for religious freedom is popular with all Americans — as long as it doesn’t curb other freedoms we all share.

In late 2020, the Becket Fund for Religious Liberty polled a thousand Americans, asking a number of nuanced questions about religious freedom. The results seem to indicate that while Americans see value in religious liberty, they believe it has limits. Broadly, a majority of Americans champion religious freedom, whether or not they call themselves a “person of faith.” But while nearly 40% of people of faith believe that religious freedom is protected too little in the United States, that view is only shared by 18% of people who say they are not religious.

On the other end of the spectrum, 20% of Americans who say that they are not religious believe that religious liberty is protected too much. Only 7% of religious people agree with that.

As the pollsters’ questions got more nuanced, there was clear evidence that the average American is more likely to give faith practices more latitude when they impact least, but more hesitant to protect beliefs and behaviors that disturb others in the community or the workplace.

For instance, more than 85% of Americans believe that it is “somewhat important” or “absolutely essential” that an American have the right to choose any religion that they wish. The same percentage believes that the right to worship without fear of persecution is a key component of religious liberty.

But nearly 37% of people say that practices that inconvenience others are “definitely not” or “not a very important part” of religious freedom. That inconvenience seems to include faith-based opinions on politics, especially in houses of worship. Nearly 35% of respondents said religious freedom should not extend to the right of religious leaders to endorse political candidates.

It’s worth pointing out that in these cases a majority of Americans believe that religious freedom should apply in these circumstances. There is widespread support for the idea that religious organizations and individuals should get a wide berth in society. But those are high percentages of dissent when a religious practice gets in another American’s way.

There were also plenty of contradictions. In a part of the survey in which Americans were asked to respond to a variety of statements about religious freedom, 3 in 5 adults agreed that religion is a fundamental part of some Americans’ identity and should be protected. However, 42% of that same group agreed that religious beliefs are often used as an excuse for bigotry.

RELATED: Is God good for America? Depends whom you ask. 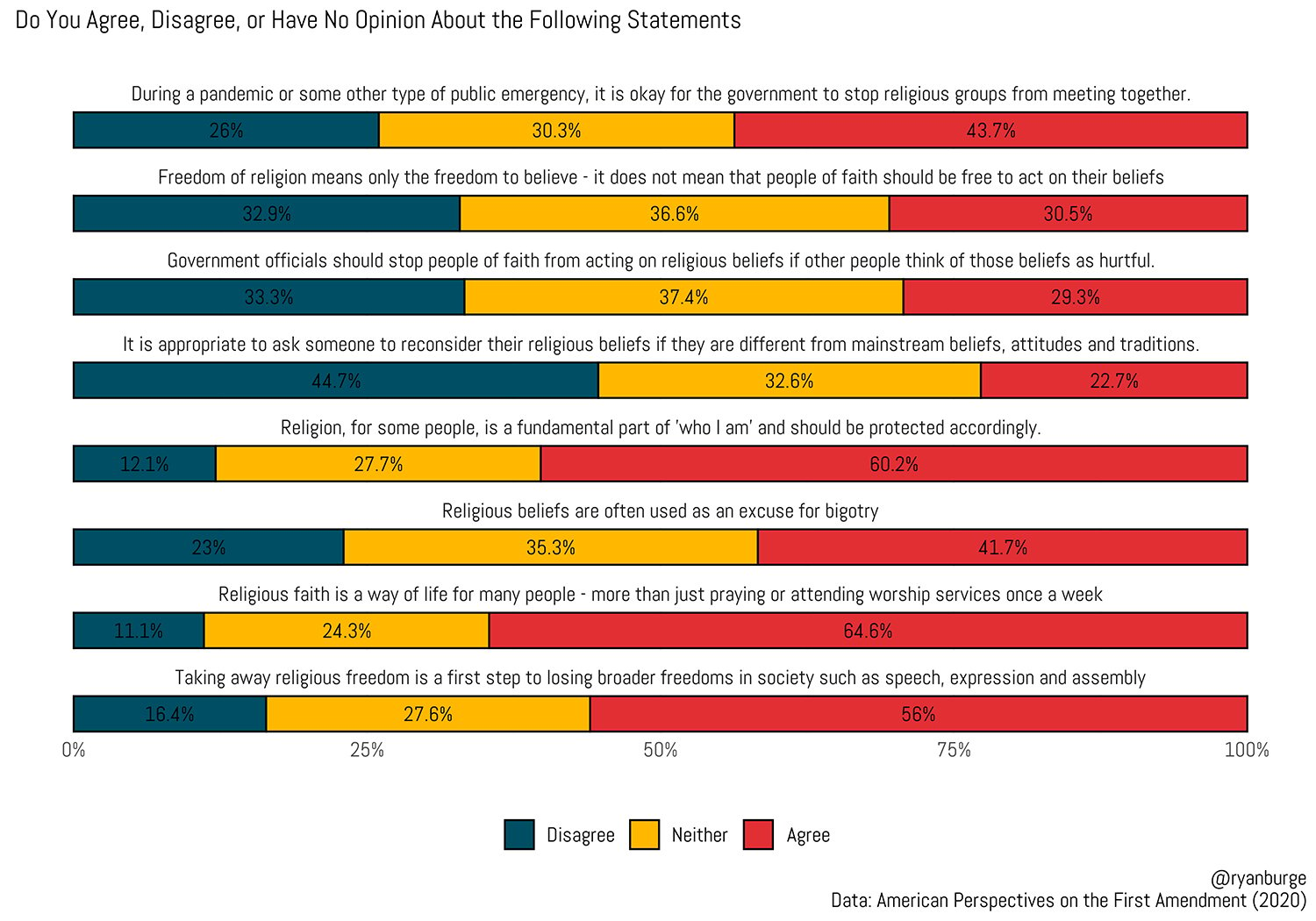 Elsewhere, 56% of Americans agreed that “taking away religious freedoms is a first step to losing broader freedoms,” yet 44% agreed that it was appropriate for the government to stop religious groups from meeting during a pandemic or other public emergency.

Anyone who studies Americans’ opinions knows that they are often in direct contradiction with each other. They often say they want to cut taxes and reduce the federal deficit, for instance, but also express strong support for costly government programs and more of them. But the message from Becket’s poll for preachers and politicians is clear: Speaking in generalities about religious freedom will win admirers. Just avoid telling anyone what to think about specific cases. 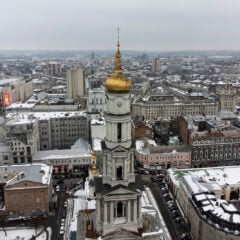 Opinion
Putin is after more than land — he wants the religious soul of Ukraine
Follow us on Facebook!
Submit your photos to RNS