(RNS) — On Feb. 25, the Church of Jesus Christ of Latter-day Saints released a statement so anemic that it wasn’t entirely clear whether it was supposed to be addressing Russia’s invasion of Ukraine the day before.

We are heartbroken and deeply concerned by the armed conflict now raging. The Church of Jesus Christ of Latter-day Saints has members in each of the affected areas and throughout the world. Our minds and hearts have been turned toward them and all our brothers and sisters.

We continue to pray for peace. We know that enduring peace can be found through Jesus Christ. He can calm and comfort our souls even in the midst of terrible conflicts. He taught us to love God and our neighbors.

We pray that this armed conflict will end quickly, that the controversies will end peacefully, and that peace will prevail among nations and within our own hearts. We plead with world leaders to seek for such resolutions and peace.

Both the statement’s timing and its note that the LDS Church “has members in each of the affected areas” certainly suggest that it was intended to condemn (softly, feebly, unsteadily) what Russia did and is doing. But since the nations in question are nowhere named, we are left to guess.

Earlier today the Church’s Europe Area Presidency also issued a statement, asking members to fast for peace this Sunday, the Church’s regular monthly day of fasting. Again, however, it didn’t name names. Russia and Ukraine are not mentioned.

Now is not the time to be like Switzerland, refusing to take a stand against an unprovoked attack. (Apparently even Switzerland feels this way, since earlier today it announced it was setting aside its usual neutrality and imposing economic sanctions because of “the unprecedented military attack by Russia on a sovereign European state.”)

I am all for praying for peace and for churches that make such prayers a regular and pointed part of our worship. We Mormons could do more with that, day to day and week to week. It’s not that I disagree with anything in the Church’s official “statement on armed conflict.” What is there to disagree with, really? It’s more that its sweeping, all-inclusive nature removes any real impact it might have had. As the historian Ardis Parshall expressed it on Twitter, it was vague and lacked heart. So, why is it so generalized? It’s an interesting question, especially considering the Church’s deep anti-Soviet sensibilities of the second half of the 20th century. Vladimir Putin has done more than any other leader to return Russia to those times of dictatorship. In 2020, for example, he pushed through legislation that will enable him to remain in power until 2036, voiding the two-term limit that had prevailed since a fragile democracy was established in the 1993 constitution. He has worked to curtail freedom and promote authoritarianism. Yet the Church has said next to nothing by way of criticism of him or of these actions.

I suspect this is due to the Church’s own self-interest. In 2018, President Russell M. Nelson announced the creation of Russia’s first-ever Latter-day Saint temple. The fact that the location for the temple has not been announced suggests it’s still a sensitive topic of negotiation. It seems likely that LDS leaders have no wish to antagonize Putin, regardless of what he has done in Ukraine and at home.

It’s a delicate situation for the Church in Russia, fraught with rising tension. LDS missionaries there have during Putin’s reign been forbidden from religious proselytizing; they have to be called “volunteers” instead of missionaries and are limited to service opportunities. And even with that proviso, two Mormon missionaries-cum-volunteers were arrested in 2019* and detained for three weeks in an immigration facility because they were allegedly teaching English without a license.

If Latter-day Saint leaders need a cautionary tale, they need look no further than what has been happening with the Jehovah’s Witnesses to whom they are often compared. In 2017, Russia banned Jehovah’s Witnesses, and Putin’s regime has spent the last several years cracking down on them, raiding their houses and imposing often harsh prison sentences. Because Jehovah’s Witnesses refuse to salute national flags or engage in military service, their history has been characterized by frequent conflicts with totalitarian states, most famously in Nazi Germany.

But here’s what I can’t stop thinking about. Mormons, to our eternal shame, had a more amicable relationship with the Nazis in the 1930s before war broke out. As the book “Moroni and the Swastika” reveals, the Church was very concerned at that time about not being expelled from Germany when its mission programs were gaining steam, so church members did what they could to accommodate Hitler’s policies. For example, members utilized their genealogical expertise to help Germans prove their Aryan ancestry and even encouraged Mormon missionaries to teach German young men how to play basketball in advance of the 1936 Berlin Olympics. Hitler was hoping, the Deseret News indicated, for a “Nordic win” at the Games, and the missionaries could help with that. 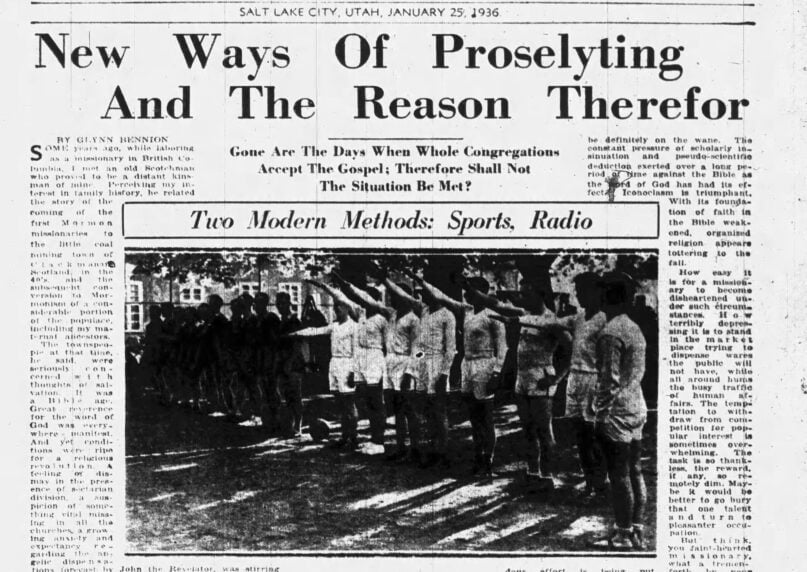 The Church section of the LDS newspaper Deseret News, January 25, 1936.

It would be marvelous if Mormons could learn something from our own history. Our short-sightedness in 1930s Germany enabled us to look the other way when great evils were being committed, so long as our missionaries were allowed to continue evangelizing.

Our priorities were wrong then, and I fear we may be committing the same mistake again. While I can understand why the Church today might be reluctant to speak out against Putin — that would mean saying goodbye in the short term to a new temple and possibly placing Russian church members in a precarious position vis-à-vis the state — it’s a moral disappointment when the best we can come up with is the equivalent of “thoughts and prayers.”

*Correction: An earlier version of this story reported that the Mormon missionaries were detained in Russia in 2017. That happened in 2019.