(RNS) — For most of the world, the rights and wrongs of the war in Ukraine are crystal clear. Russia’s violent invasion is illegitimate and unjust. Ukraine’s violent self-defense is legitimate and justified.

But in the world of Christian theology, things aren’t so simple. And I’m not just thinking of Patriarch Kirill of Moscow, who has supported the invasion, he has said, in order to prevent gay pride parades.

Since its first days, Christianity has contained an injunction not to respond in kind to unjust violence. In the Sermon on the Mount, Jesus rejects Leviticus’ “eye for eye,” instead instructing his followers: “Do not resist the one who is evil. But if anyone slaps you on the right cheek, turn to him the other also.”

RELATED: Keep your eyes on Kirill

From the early Christian fathers down through the Quakers, Amish and Mennonites, this has been taken by some Christians as a mandate for out-and-out pacifism. On the other hand, at a time when the newly christianized Roman Empire was beset by Gothic invaders, Augustine advanced a theory of just war, which has been elaborated and refined by subsequent Catholic moral theologians into a set of principles.

Just war theory thus recognizes a right of self-defense and a right to intervene on behalf of those who have been unjustly attacked. On the day that Russia invaded Ukraine, for example, Fordham University ethicist John Davenport wrote in “America,” the Jesuit magazine, that the invasion failed just war theory and that a proportionate military response on NATO’s part would pass it.

For his part, Pope Francis has aligned himself with the pacifist camp. In his 2020 encyclical Fratelli Tutti, he warns against an “overly broad interpretation” of the “potential right” of “legitimate defense by means of military force.” Because of the threat modern weaponry poses to innocent civilians, he asserts that it is “very difficult nowadays to invoke the rational criteria elaborated in earlier centuries to speak of the possibility of a ‘just war.’ Never again war!”

On Sunday, the pope, without specifically naming Russia, condemned the war in Ukraine as “unacceptable armed aggression.”

On the just war as well as the pacifist side, the Catholic theological imperative is to draw a bright line between what is right and what is wrong. But in the Eastern Christian tradition there is a third way — one that makes clear that war is wrong but nonetheless recognizes that in a fallen world it is sometimes necessary.

This is the principle of “economia,” developed in the 4th century by the Cappadocian Fathers Basil the Great, Gregory of Nyssa and Gregory of Nazianzus. In a letter, Basil wrote what Orthodox Christianity now knows as canon 13:

Our Fathers did not reckon killings in war as murders, but granted pardon, it seems to me, to those fighting in defense of virtue and piety. Perhaps, however, it is well to advise them that, since their hands are not clean, they should abstain from communion along for a period of three years.

As Orthodox scholars Alexandros Kyrou and Elizabeth Prodromou make clear in a recent book on Orthodox perspectives on war, this view kept the Byzantine state from developing the concept of a holy war as the Western Church did.

“Obviously, the military was regarded as crucial to the survival of society,” the two write. “Yet, despite the importance of generalship and soldiering, the military profession, like war itself, was not considered a noble endeavor.”

Sadly, that point of view has been lost on a Russian patriarchate that, since the fall of Byzantium in 1453, has been avid to see Moscow realize its destiny as the Third Rome, a successor to the theological and political primacy of first Rome itself, then Constantinople. 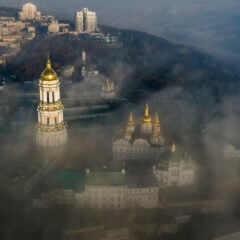