WASHINGTON (RNS) — Jamie Manson, head of Catholics for Choice, was watching Netflix Monday evening (May 2) when Politico published Justice Samuel Alito’s draft majority opinion arguing for overturning Roe v. Wade. Like many Americans, even devoted activists on the issue, Manson little expected the news. She said it took multiple calls from her staff to get her attention.

The decision, however, did not surprise her.

“The ruling? Not shocking,” she told Religion News Service. “We listened on Dec. 1 to the arguments. We know the makeup of this court. We have five radically anti-choice Catholics on this court, so we weren’t surprised. I hope it wakes people up. Because I think most folks have been in denial that this is happening.”

On Tuesday, Manson was one of hundreds of demonstrators on both sides of the abortion debate who gathered outside the Supreme Court to lift their voices and raise up prayers, responding to the prospect that a right to abortion at the national level will lose its legal grounding after a half-century if Alito’s draft becomes official. 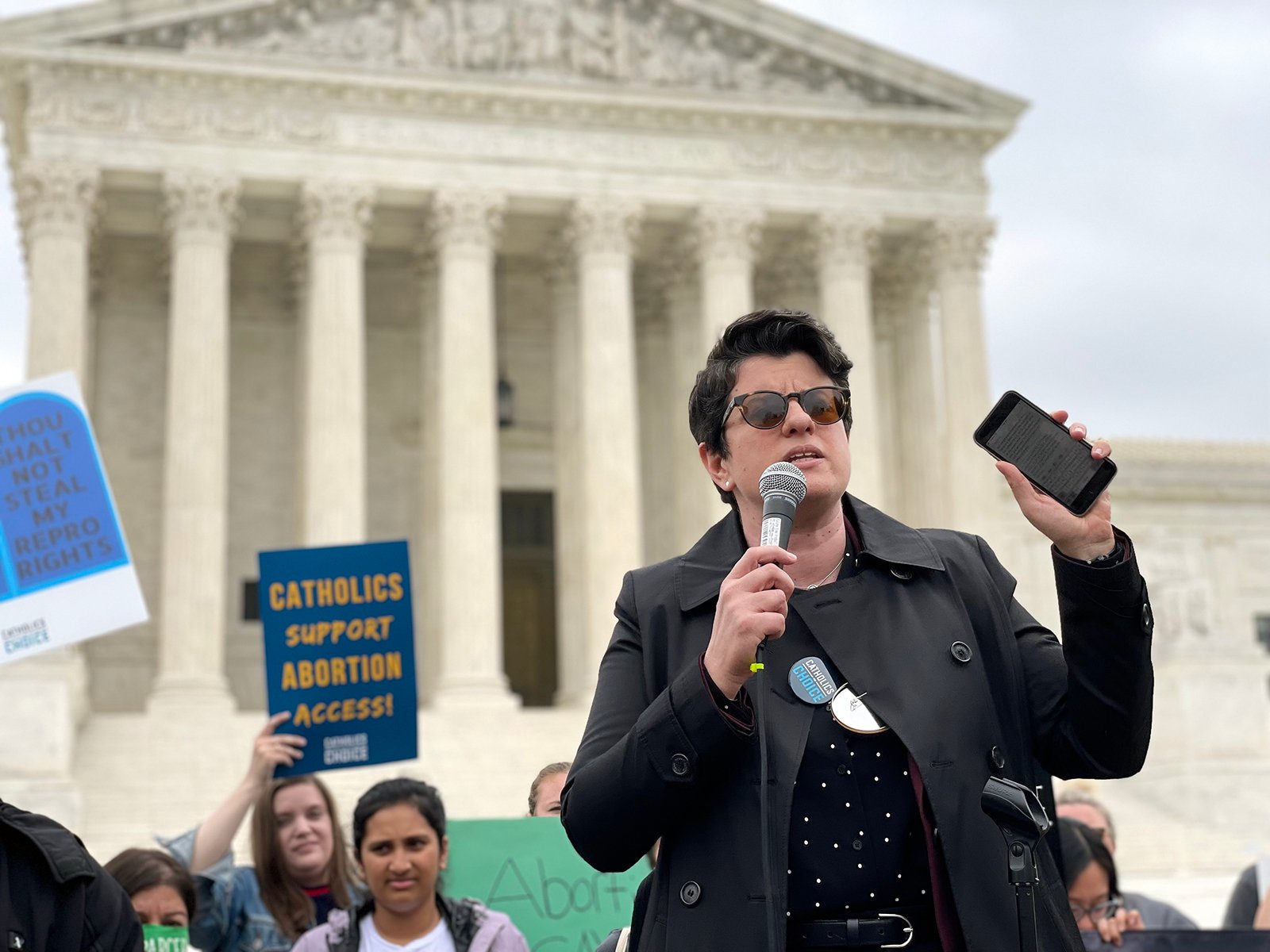 Jamie Manson, head of Catholics for Choice, speaks during demonstrations in front of the U.S. Supreme Court, May 3, 2022, in Washington. RNS photo by Jack Jenkins

Manson was one of several speakers, including Sens. Elizabeth Warren and Amy Klobuchar, who addressed the abortion-rights defenders in the crowd as a smaller contingent of opponents stood nearby.

Speaking to supporters of abortion rights, Manson stressed the need for action. Among the crowd, the sense of urgency was palpable: Many had arrived at the court bearing signs, including one that read “Thou shall not steal my repro rights.”

“I am one of 68% of Catholics in the United States who do not want to see Roe versus Wade struck down,” Manson said, referring to a 2019 Pew Research poll that showed broad support for upholding Roe among religious groups.

Manson called the potential ruling the result of a decades-long campaign coordinated “by U.S. Catholic Bishops by very wealthy right-wing Catholics,” and urged fellow faithful who support abortion rights to speak up.

“I call on all people who support abortion rights because of their faith — not in spite of it — to be as loud as you can be,” Manson said, pausing after being interrupted by cheers. “If Roe falls, the right wing is going to claim it as a victory for religion, and a victory for faith and Christianity. And that is a lie.” 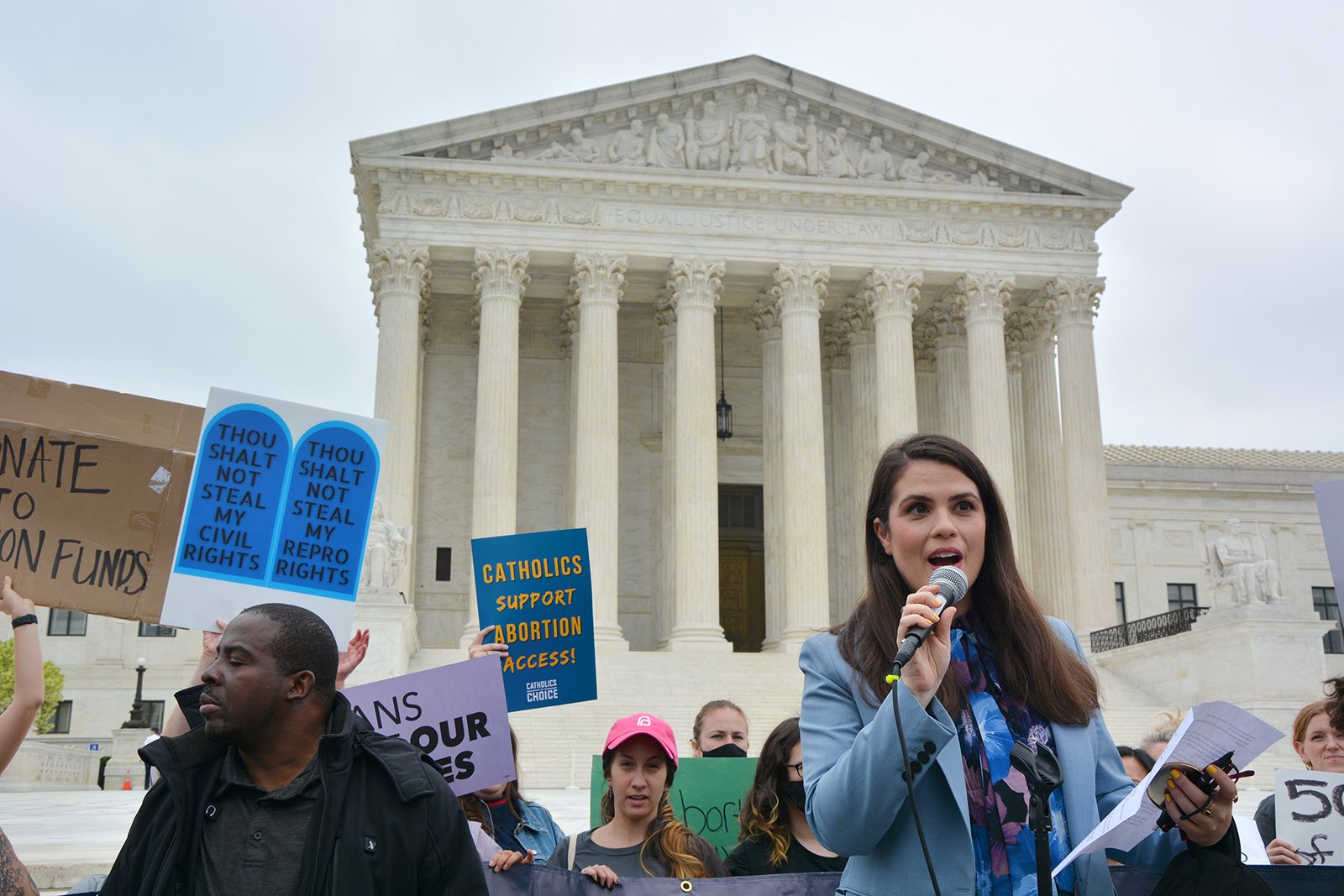 Sheila Katz, of the National Council of Jewish Women, speaks during demonstrations in front of the Supreme Court, May 3, 2022, in Washington. RNS photo by Jack Jenkins

Sheila Katz, head of the National Council of Jewish Women, also spoke at the rally.

“I’m here to say loudly that Jews support abortion,” she said. “The Torah is clear on this issue: Abortion is not only permitted in Judaism, but in some cases required when the life of the pregnant person is at stake.”

A few feet away, abortion opponent Steve Corson stood alone holding a Bible and a shofar while wearing a red Trump hat. An Arizona native, Corson said he traveled to Washington weeks earlier as part of the People’s Convoy, a caravan of truckers and others who oppose government COVID-19 vaccine mandates.

His faith, he said, also compelled him to oppose abortion. 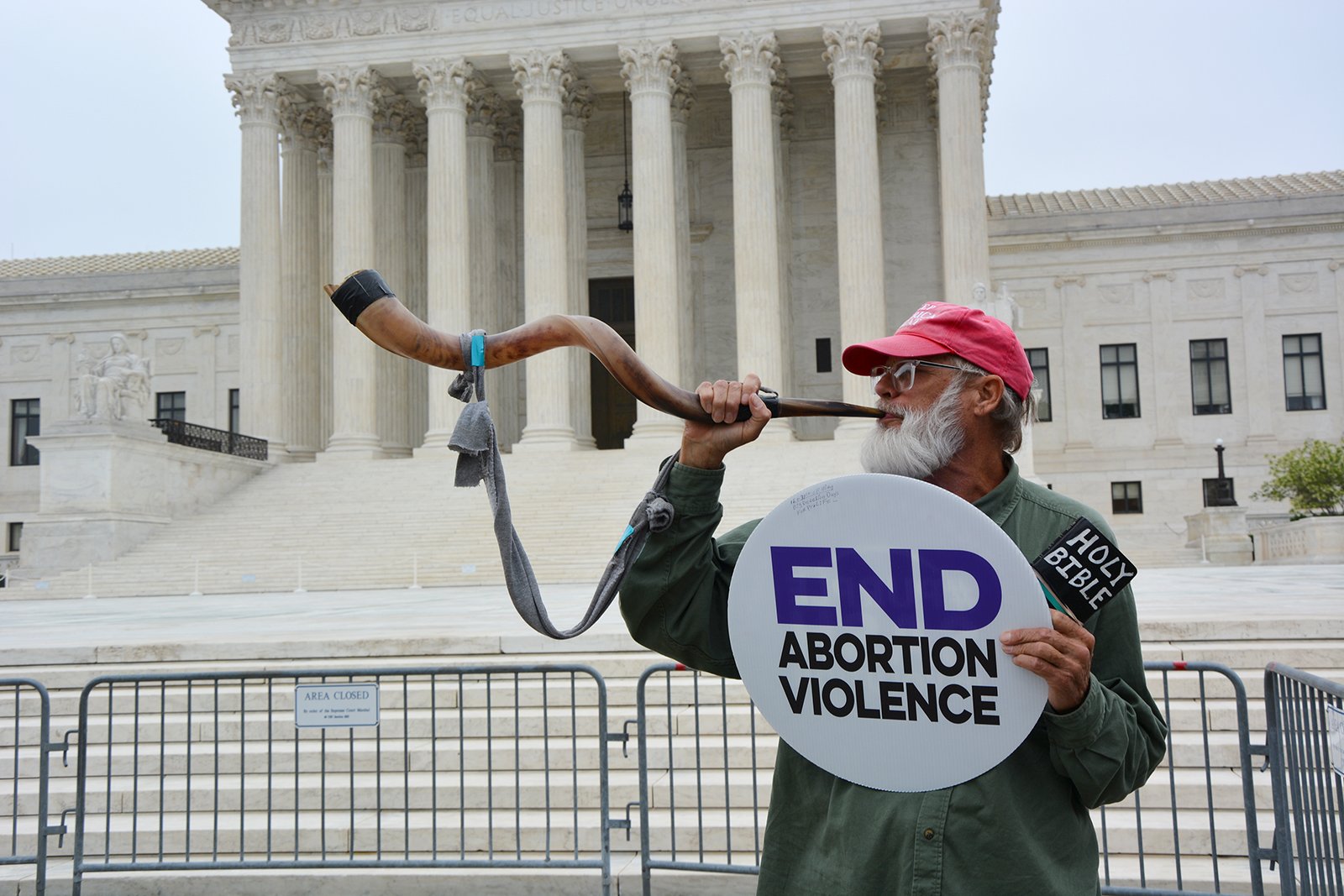 Steve Corson blows a shofar in front of the U.S. Supreme Court, May 3, 2022, in Washington. RNS photo by Jack Jenkins

“I heard about the possible ruling to end Roe v. Wade, and I think it would be one of the greatest miracles ever done in the United States of America — under God,” said Corson. “I know God Almighty does not care for abortion at all. He hates it. He despises it.”

Asked about the faith leaders who back abortion rights, Corson replied, “I feel sorry for them.”

“Any pastor or Christian type person, any godly person in America and in the world that does not stand against abortion is a sick soul to me — and they’re in big trouble,” he said.

After he finished speaking, Corson defiantly blew his shofar.

Nearby, a group of people in blue shirts bowed their heads in prayer, expressing thanks for the the promise of Alito’s opinion. Members of the group explained they were parents of sixth graders at Christian Heritage Academy, a school in Oklahoma. They were in town by happenstance, as part of a field trip. 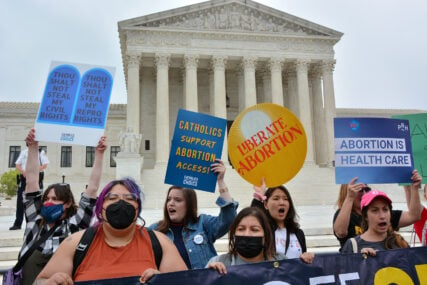 People demonstrate in front of the U.S. Supreme Court, May 3, 2022, in Washington. RNS photo by Jack Jenkins 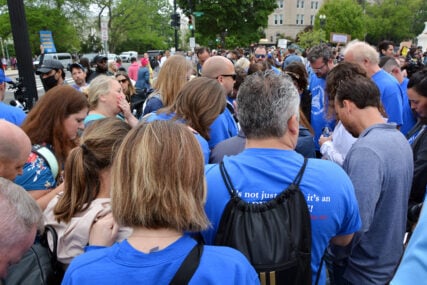 A group of parents from Oklahoma bow their heads in prayer near the U.S. Supreme Court, May 3, 2022, in Washington. RNS photo by Jack Jenkins

“Obviously, being a born-again Christian, trying to live my life that way, to me, it’s pretty black and white,” said Adam Bryan, when asked about abortion. He described himself as a firm believer that life begins at conception and that abortion constitutes an act of murder.

According to recent polling from the Public Religion Research Institute, white evangelical Protestants are the major faith group most likely to express opposition to abortion in general, with only 30% saying they believe it should be legal in all or most cases. They are also the faith group most likely to support overturning Roe v. Wade, although views are far more split: 46% oppose overturning the decision, while 52% are in favor.

Other religious traditions have not only voiced support for abortion rights, but taken it up as a cause. While active for decades, religious pro-choice advocates have become increasingly visible over the past year: Faith leaders and religious groups have been prominently featured at rallies, filed suit against laws restricting abortion access, and projected messages in support of abortion rights onto Catholic basilicas. 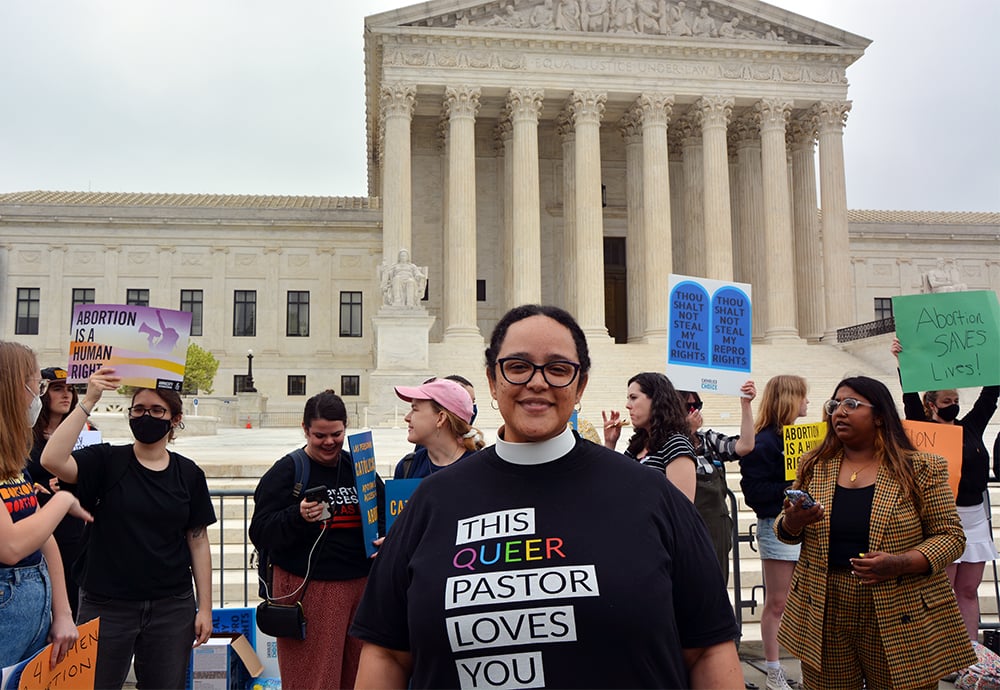 The Rev. Sofia Betancourt in front of the Supreme Court, May 3, 2022, in Washington. RNS photo by Jack Jenkins

“It’s not that the values are new, it’s that the need to re-argue the same arguments we’ve already made for justice is becoming more and more clear,” she said. “I hope people will hear this as a call to show up to live their values, to protect the vulnerable among us. Sometimes it is literally about putting our bodies where they need to be most visible, so that the people most impacted in the world — all of us blessed — are not left in this fight alone.”