(RNS) — Archbishop Salvatore J. Cordileone, who oversees the Archdiocese of San Francisco, announced on Friday (May 20) he is barring House Speaker Nancy Pelosi from taking Communion in churches he oversees, citing her support for abortion rights.

“After numerous attempts to speak with her to help her understand the grave evil she is perpetrating, the scandal she is causing, and the danger to her own soul she is risking, I have determined that the point has come in which I must make a public declaration that she is not to be admitted to Holy Communion unless and until she publicly repudiate her support for abortion ‘rights’ and confess and receive absolution for her cooperation in this evil in the sacrament of Penance,” Cordileone wrote in a letter sent to churchgoers in his archdiocese.

In his letter and in a separate interview with America Magazine, Cordileone accused Pelosi of “scandal” — a term used in Catholic theological parlance to signify actions that can lead believers to sin.

Representatives for Pelosi did not immediately respond to a request for comment.

In his letter, Cordileone insisted he still considers Pelosi, who speaks often of her Catholic faith, to be a “sister in Christ.” Her “advocacy for the care of the poor and vulnerable,” he said, “elicits my admiration.”

“I assure you that my action here is purely pastoral, not political,” he added.

But recent debates over the issue of Communion and abortion raise doubts as to whether Catholics and non-Catholics alike will see Cordileone’s actions — the censure of one of the highest-ranking politicians in the country amid a national debate over abortion — as wholly divorced from politics. 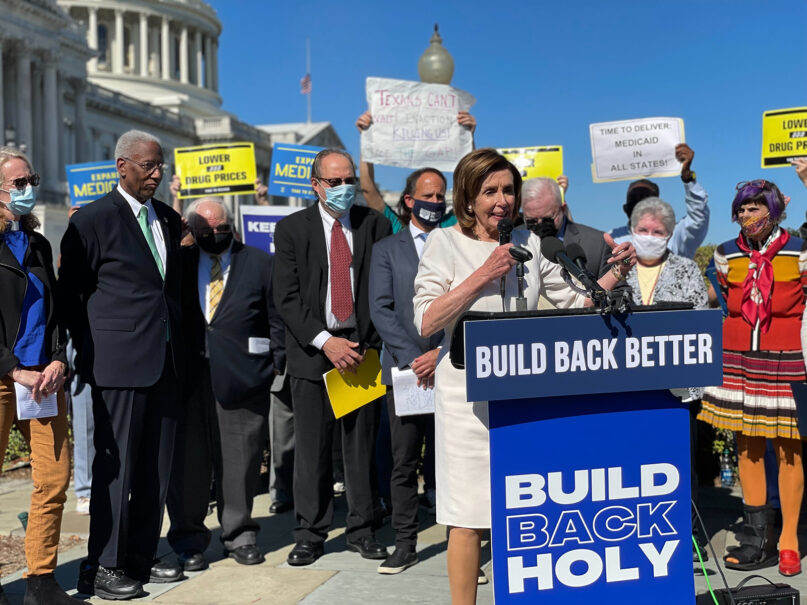 While crafting a document on the Eucharist in 2021, Catholic bishops openly feuded over whether to deny Communion to President Joe Biden — a Catholic who, like Pelosi, has voiced support for abortion rights. Biden was reportedly denied Communion at a parish in South Carolina while running for president in 2019, with the priest citing his stance on abortion.

Cordileone has long been one of the most strident Catholic voices challenging politicians who support abortion rights. Other bishops, however, have expressed opposition to denying elected officials the Eucharist because of their views. Cardinal Wilton Gregory, who oversees the Archdiocese of Washington, told Religion News Service in December 2020 that he did not support denying Communion to Biden over abortion, saying, “I don’t want to go to the table with a gun on the table first.”

As the debate over the issue raged last summer, a group of 60 Catholic House Democrats, led by Rep. Rosa DeLauro and including Rep. Alexandria Ocasio-Cortez, released a “statement of principles” in June urging U.S. Catholic bishops to avoid “weaponizing” the Eucharist. 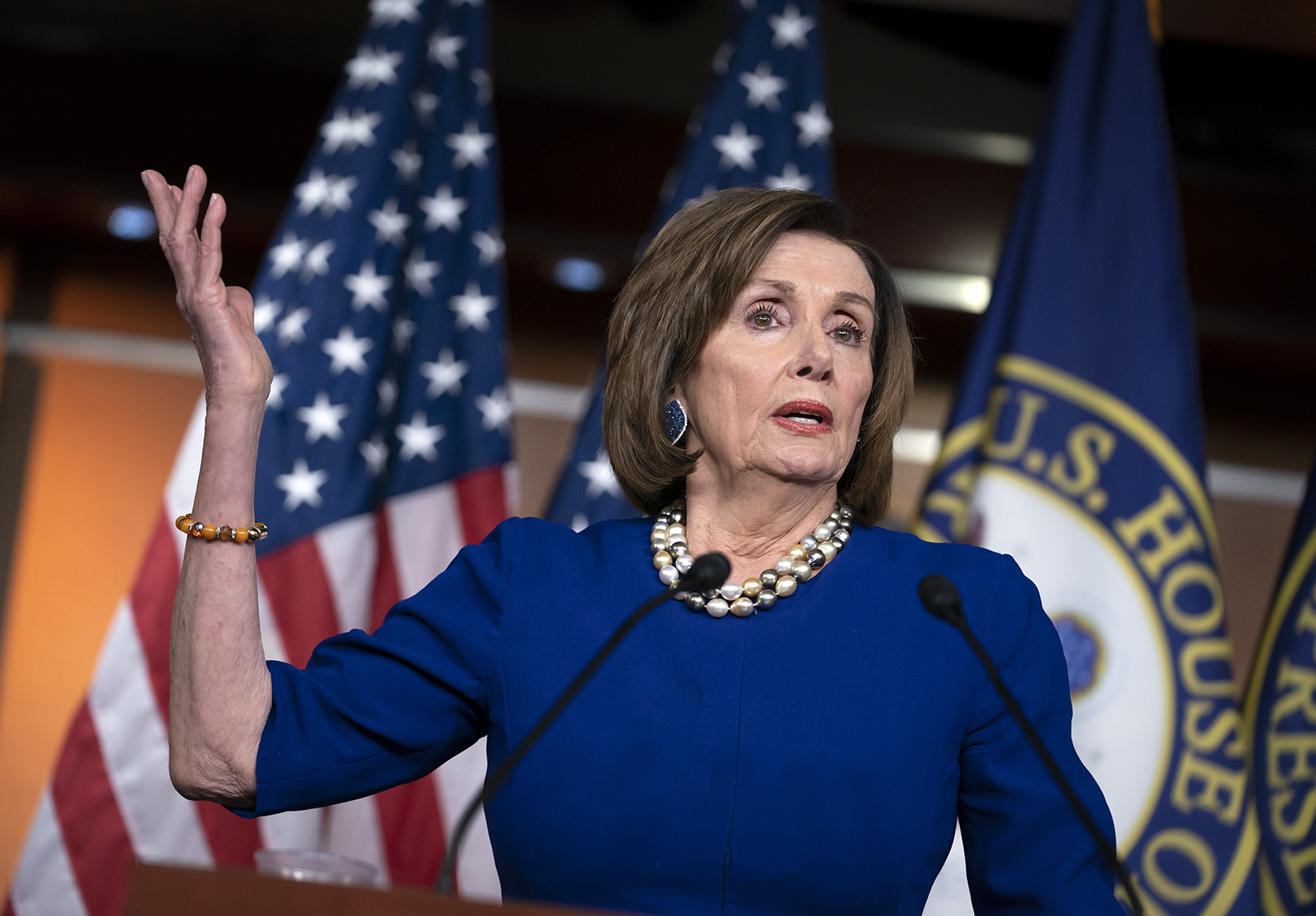 Asked to comment on news of Cordileone barring Pelosi from Communion, a representative for DeLauro responded by pointing to a specific section of the letter.

“The Sacrament of Holy Communion is central to the life of practicing Catholics, and the weaponization of the Eucharist to Democratic lawmakers for their support of a woman’s safe and legal access to abortion is contradictory,” the section reads.

“No elected officials have been threatened with being denied the Eucharist as they support and have supported policies contrary to the Church teachings, including supporting the death penalty, separating migrant children from their parents, denying asylum to those seeking safety in the United States, limiting assistance for the hungry and food insecure, and denying rights and dignity to immigrants.”

Officials at the Vatican cautioned bishops against the debate over Communion last year, and the clerics ultimately created a document that barely mentioned political figures.

Cordileone’s strident rebuke of Pelosi stands in contrast to Pope Francis. While the pope has not spoken directly about the debate among U.S. bishops, he addressed what he called “the principle of the matter” in September 2021, passionately conveying to reporters that he has never denied Communion to anyone. He added that while he does not know if Catholic supporters of abortion rights have ever approached him for Communion, he has “never refused them the Eucharist, since the time I was a priest.”

A month later, he welcomed President Joe Biden to the Vatican, and did not bar him from receiving Communion in Rome, which the pontiff oversees.

After their meeting, Biden said the pope told him he was a “good Catholic” and to “keep receiving communion.” The Vatican did not dispute the president’s account. 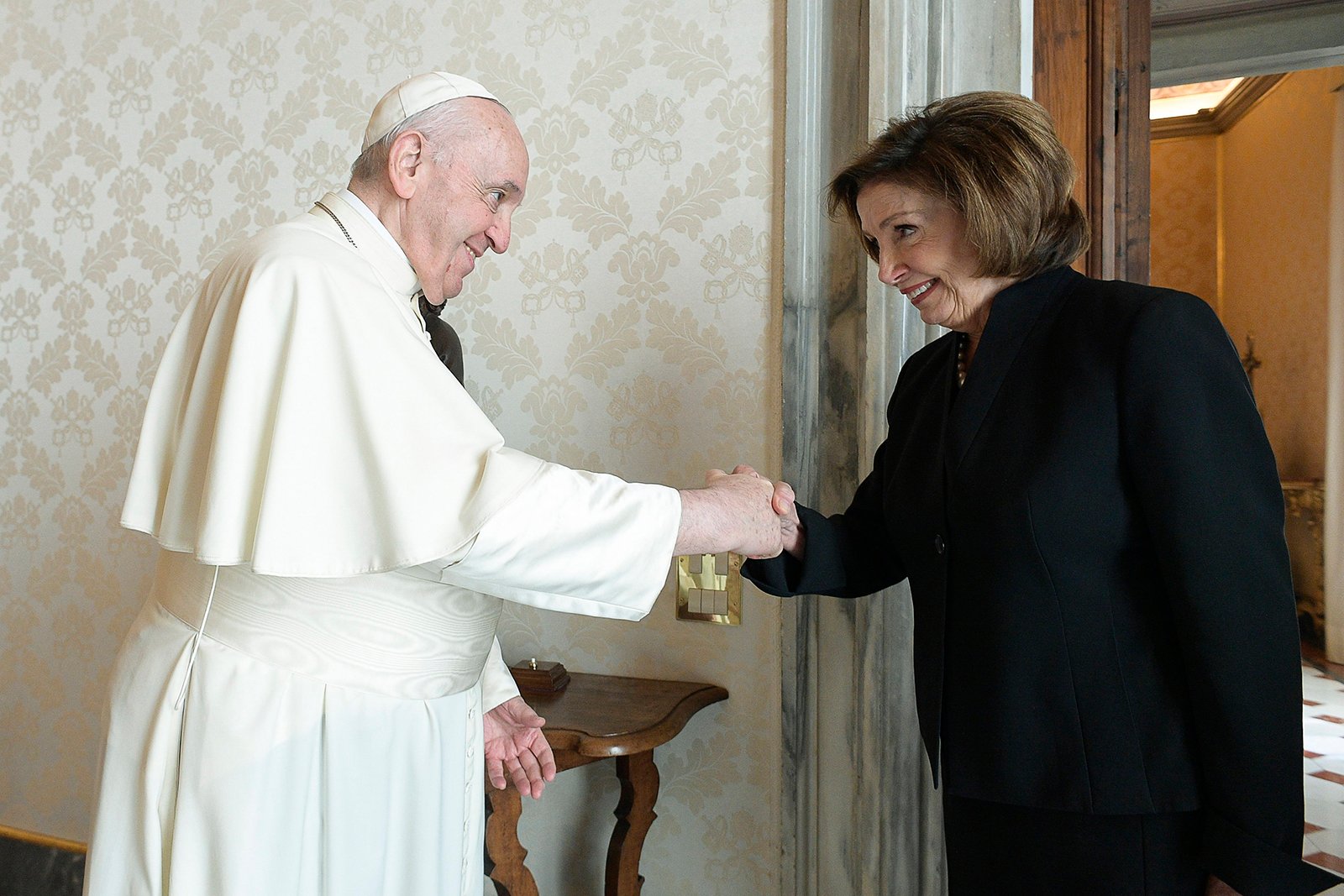 The issue of whether to deny Communion to Democrats has cropped up for years, particularly around the issue of abortion. The most prominent example involved Former Secretary of State John Kerry, whose 2004 presidential campaign was dogged by threats of Communion denial lobbed by a small group of clerics. There were no reports he was ever prohibited from the sacrament, but media coverage of the issue was described at the time as “haunting” his campaign.

In 2018, one Arizona bishop briefly raised the possibility of “canonical penalties” — which would include denying Communion — for Catholics who worked in government and helped separate immigrant families along the U.S.-Mexico border, a widely criticized policy instituted under former President Donald Trump’s administration. However, unlike Communion denial for those who support abortion rights, withholding the Eucharist from Catholics who helped separate immigrant families failed to gain traction among clerics.

While the church hierarchy has long condemned abortion, most Catholics in the United States support abortion rights. According to a 2019 Pew Research Survey, 68% of Catholics in the country do not want the Supreme Court to overturn Roe.

Jamie L. Manson, head of the advocacy organization Catholics for Choice, decried Cordileone’s actions as akin to “waging a culture war that the bishops have already retreated from.”

“Last year, a core contingent of U.S. bishops launched an unholy crusade to prohibit President Biden and other pro-choice politicians from receiving Communion,” Manson said in a statement.

“Thankfully, they backed down due to overwhelming pushback from a vast majority of Catholics from both sides of the political divide who let them know that abusing the power of our sacraments is unacceptable. But Archbishop Cordileone still won’t relent.”

This is a breaking story and has been updated.