(RNS) — A Grand Rapids, Michigan, Christian Reformed congregation that was ordered to rescind the ordination of a deacon in a same-sex marriage has voted to appeal the decision. The unprecedented step sends the matter to the small Dutch Calvinist denomination, which has no established procedure to expel a congregation.

Neland Avenue Christian Reformed Church ordained the deacon, a woman who has asked to remain unnamed out of fears for her safety, in 2020. Earlier this month, the denomination’s annual synod, which had not met in the interim due to the COVID-19 pandemic, ordered Neland Avenue to reverse its vote.

The synod’s move comes amid a growing backlash to LGBTQ gains across the nation and ongoing divisions among theologically conservative denominations over sexuality.

The deacon told Neland Avenue’s church council Monday (June 27) that she wanted to continue serving on its deacon board. The council, a group of about 20 individuals that includes the church’s two co-pastors, a group of deacons and a group of elders, then unanimously voted to appeal the synod’s injunction to remove the deacon.

RELATED: A church was ordered to rescind its gay deacon. Now it weighs its next step.

“We take the admonition of Synod 2022 very seriously,” the church council said in a statement. “However, as we prayed, wrestled with the Word, and discerned the Spirit together, our conscience told us that we would be both disobedient to God’s call, and less than fully loving to all His children if we ‘immediately rescinded’ our decision to ordain this deacon. After prayerful consideration of the directives of Synod 2022, we have decided to appeal its decisions.”

Neland Avenue’s co-pastor, Joel DeMoor, said the decision to appeal may be a first in the 165-year history of the denomination.

“If they decide to cut us off, that’s up to them,” said DeMoor. “We can’t control that piece. But at the same time, there’s still much we still love and are grateful for in the CRC. We’re not going to react and leave.”

The denomination’s bylaws stipulate how a a church may decide to disaffiliate but includes no provision for kicking one out.

The Rev. Zachary King, the denomination’s general secretary, said in an email that the Christian Reformed Church would “work to discern how to process this appeal and how it fits into our CRC Church Order.”

The demand to remove the deacon followed a vote on June 15 to approve a report on biblical theology of human sexuality. The report warned that sexual sin — including homosexual sex — threatens a person’s salvation. The synod also voted to make this position on sexuality a confessional statement of faith. That means not following it requires church discipline, up to and including excommunication. 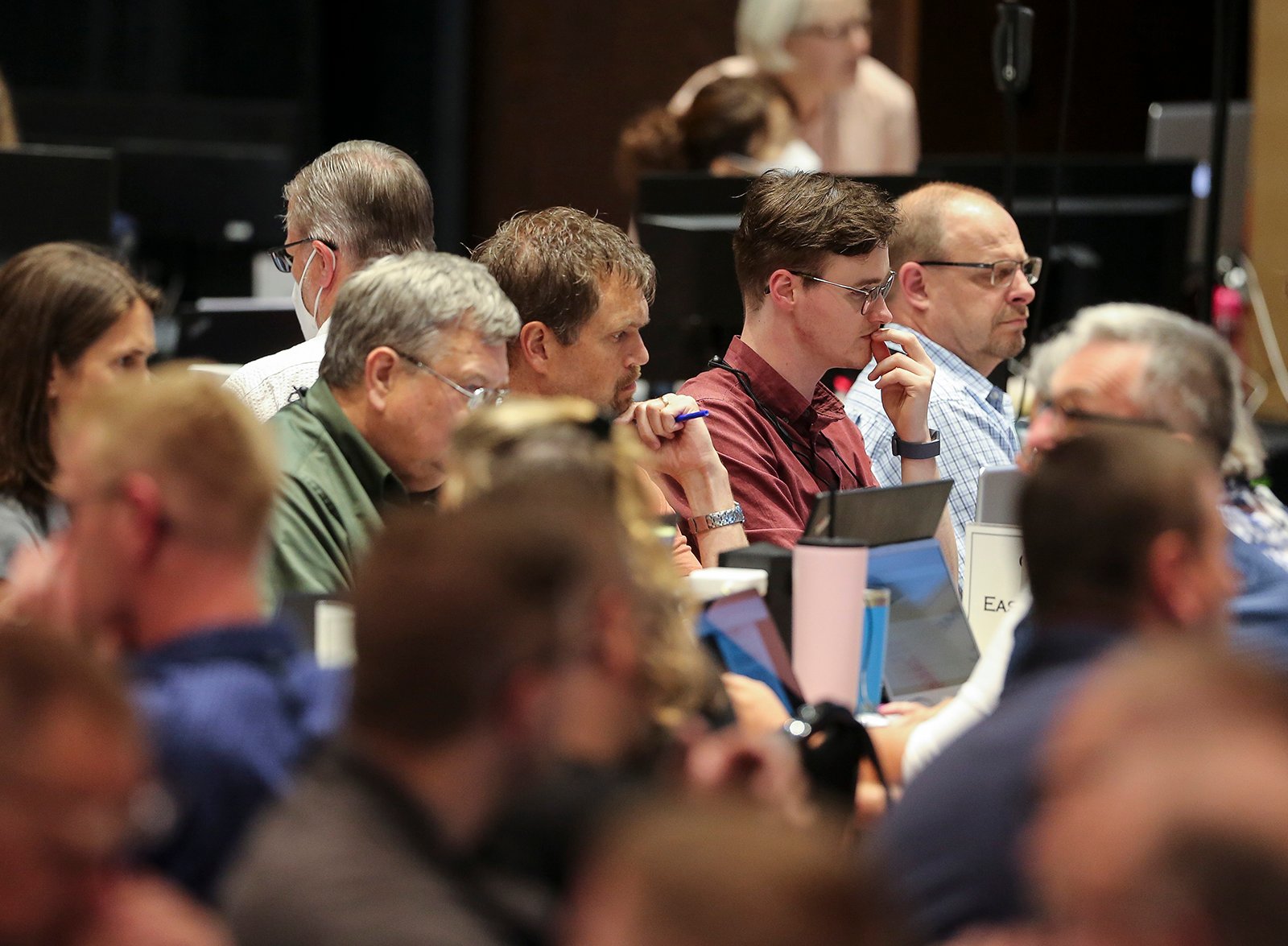 But Neland Avenue, a thriving 106-year-old congregation, has over the last seven years begun to reexamine its understanding of homosexuality in a series of “intentional dialogues.”

The church’s motto, inscribed on the marquee outside the church, reads, “There is a place for you at Neland,” and church members, DeMoor said, wanted to remain true to the motto. While some members continue to hold a traditional understanding of homosexual sex as sin, the church has found a way to live with disagreement and be welcoming to all.

“It feels really great to be supported by my church family,” the gay deacon wrote in an email after Monday’s vote. “And I hope others in the LGBTQ+ community who want to use their gifts in God’s kingdom see Neland Church as a beacon of hope.”

In 2016, after already serving as deacon years earlier, the woman married her longtime partner. When she was nominated to be ordained a deacon again in 2020, she was elected overwhelmingly.

Neland Avenue is not the only church in the denomination to welcome LGBTQ members. At least two other churches in Grand Rapids are open and affirming of LGBTQ members and several other CRC congregations in the U.S. and Canada have also done so.

But those churches tread cautiously. In 2006, when First Christian Reformed Church of Toronto wanted to ordain a member in a same-sex union, the denomination appointed a committee that gave the church 30 days to change its decision and recommended that the church be disaffiliated if it didn’t. The church backed down and no disciplinary action was taken.

Earlier this month, the synod also voted to send a committee to meet with Neland Avenue to oversee its compliance with the newly elevated teaching on sexuality.

King said a committee would be appointed soon, and the church said in its statement that was open to meeting with the committee.

“We feel we’re following the Spirit,” said Jane Bruin, chair of Neland Avenue’s elder board. ”The most fearless place to be is where you think God is calling you. Right now we’re focused on engaging our body and having our voice heard in terms of what the Spirit is leading us to do.”