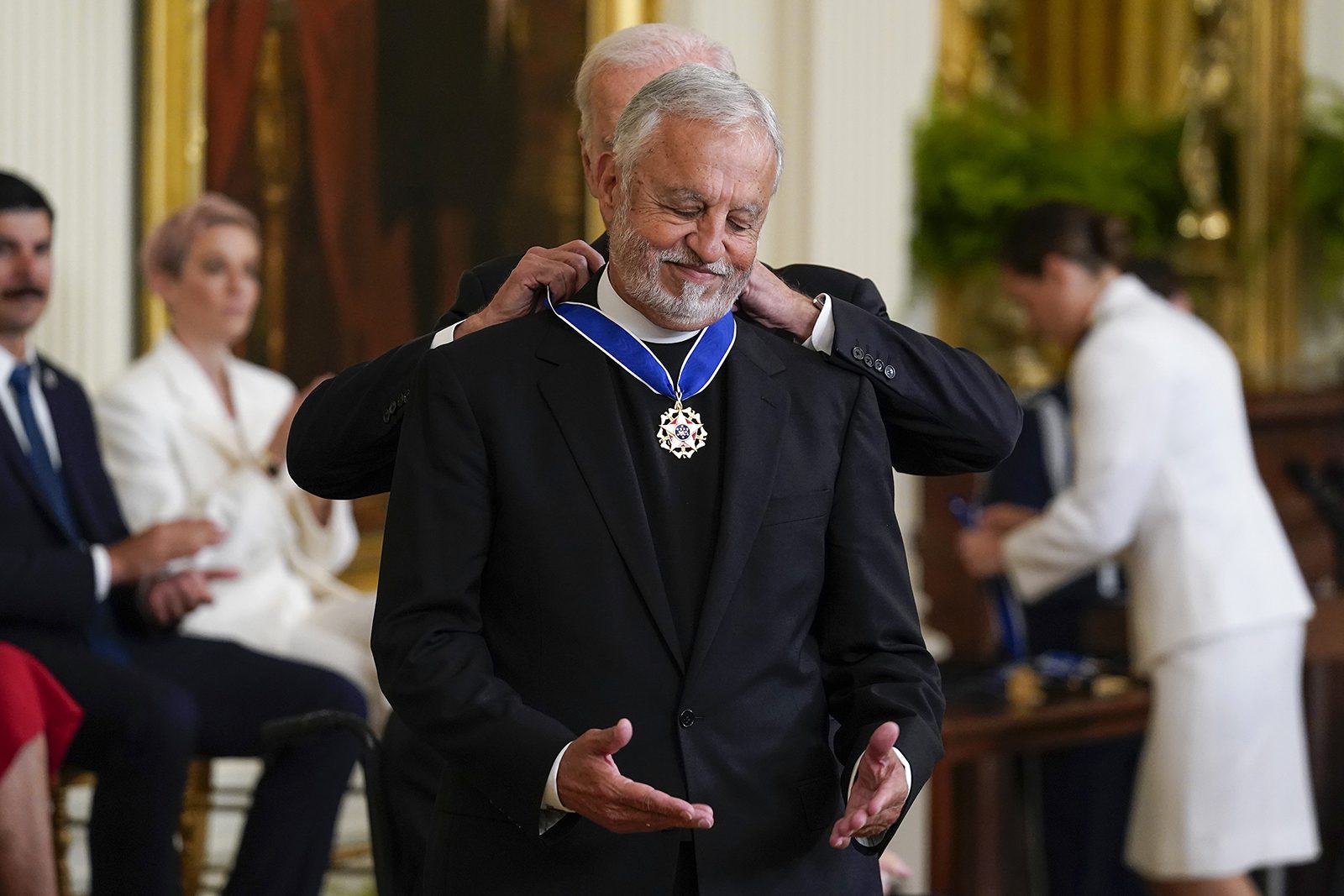 WASHINGTON (RNS) — The Rev. Alexander Karloutsos has met with presidents since the Carter administration, speaking to the nation’s chief executives on, especially, the cause of religious freedom.

But the Greek Orthodox priest’s latest trip to the White House was to hear President Joe Biden speak about him as one of 17 recipients of the Presidential Medal of Freedom. Sister Simone Campbell, who was influential in the passage of health care legislation, joined Karloutsos as another religious figure among the honorees in the ceremony on Thursday (July 7).

“For more than 50 years, your leadership in the Greek Orthodox Archdiocese of America has mattered to every prelate in the Greek church,” Biden told Karloutsos. “A man of  deep moral clarity and calling, you’ve advised generations of presidents and parishioners with unmatched humility and grace.”

In an interview Wednesday, Karloutsos, 77,  said he was humbled to receive the nation’s highest civilian honor bestowed by the president.

“It’s what they call amazing grace,” he told Religion News Service, as he attended the centennial celebration of the Greek Orthodox Archdiocese of America happening this week in New York City. “You don’t think when you’re in service that you should be honored for something you would have naturally done anyway.”

Karloutsos, who has raised more than $300 million for the archdiocese, is the protopresbyter of the Ecumenical Patriarchate, a designation bestowed upon him by Ecumenical Patriarch Bartholomew I that is the highest honor for a married priest in Orthodoxy. While serving as Bartholomew’s special assistant from 2004 through the patriarch’s retirement in 2019, he facilitated meetings with three Catholic popes.

Karloutsos’ more than five decades as a priest have included a number of presidential encounters. He encouraged President Ronald Reagan to establish the holiday honoring the Rev. Martin Luther King Jr. Karloutsos united alongside Catholic, Protestant and Jewish leaders to build an interreligious chapel at the presidential retreat at Camp David that was dedicated by President George H.W. Bush. And Karloutsos worked with President George W. Bush after 9/11 in his role as a Port Authority chaplain. Sister Simone Campbell, left, and the Rev. Alexander Karloutsos listen to President Joe Biden before each received a Presidential Medal of Freedom at the White House in Washington, Thursday, July 7, 2022. RNS photo by Adelle M. Banks

That last memory came full circle days before the East Room ceremony when Archbishop Elpidophoros, the leader of the Greek Orthodox Archdiocese of America, designated Karloutsos to be the lead priest at the July 4 consecration service marking the reopening of St. Nicholas Greek Orthodox Church and National Shrine, which had been destroyed during the 9/11 attacks.

“That was very emotional,” said Karloutsos, who helped spearhead the fundraising to rebuild the shrine, “because I was there when we saw our church pulverized, we saw our city paralyzed, and we saw our country perplexed beyond measure.”

The honoree, who is the senior pastor of a church in Southampton, New York, said his relationship with Biden is special, in part, because they have bonded over familial losses.

Campbell also has worked with current and previous administrations, advocating for the poor as the leader of Network, the Catholic lobbying organization, from which she resigned last year. She especially worked with Biden, when he served as vice president in the Obama administration, in the successful passage of the Affordable Care Act. 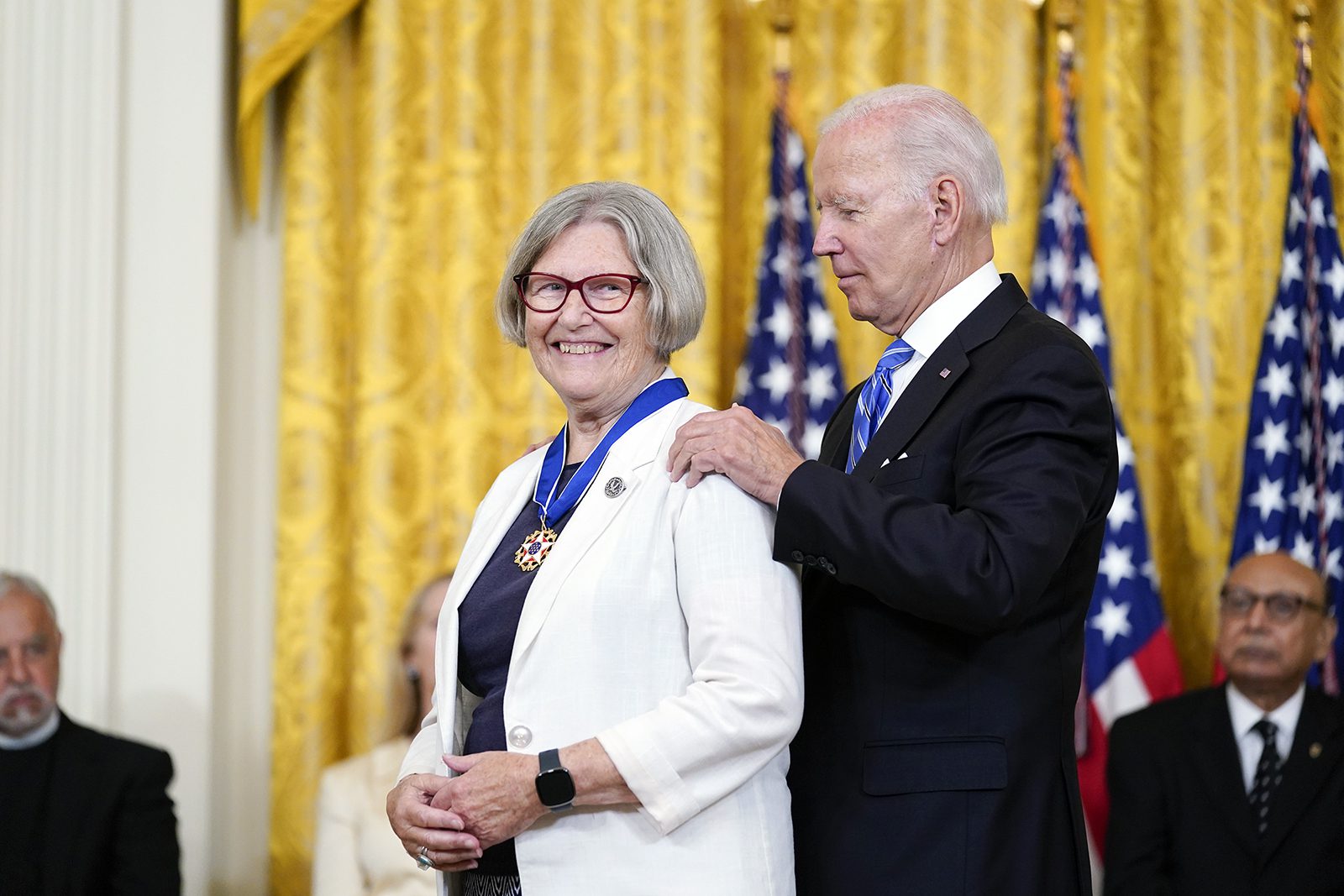 President Joe Biden awards the nation’s highest civilian honor, the Presidential Medal of Freedom, to Sister Simone Campbell during a ceremony in the East Room of the White House in Washington, July 7, 2022. Campbell is a member of the Sisters of Social Service and former executive director of Network, a Catholic social justice organization. She is also a prominent advocate for economic justice, immigration reform and health care policy. (AP Photo/Susan Walsh)

Campbell said before the ceremony that she was overjoyed about receiving the honor.

“It brings tears to my eyes; I just can’t believe it,” she said in an interview, speaking from her one-bedroom apartment filled with friends and the supervisor of her order, Sisters of Social Service.

“But it really is such an affirmation of all of the faith-based advocacy that goes on here in D.C. and all across the country as we work to make law work for the 100 percent.”

Campbell, known for her “Nuns on the Bus” nationwide social justice tours, said she strove to work with the Obama, Trump and Biden administrations.

“We’re not about partisan; we’re about policy,” she said, describing herself as “an equal opportunity annoyer” around issues such as health and immigration. “We need to get policy done.”

Having resigned from Network last year, Campbell, 76, has just co-founded Understanding Us, a bridge-building organization.

“What we’re trying to do is provide opportunities for folks on the left and the right to have conversation together, have safe conversation and learn skills to be able to talk to each other,” she said, “whether it’s around the Thanksgiving table with our challenging families or just people that we work with in congregations, but provide the skills we need to heal our democracy.”

Biden praised Campbell — and nuns in general as confidence-builders — during the ceremony.

“For so many people and for the nation, Sister Simone Campbell is a gift from God,” he said. President Joe Biden, at podium, speaks before he awards the Presidential Medal of Freedom to honorees at the White House in Washington, Thursday, July 7, 2022. RNS photo by Adelle M. Banks

Both the Catholic nun and another honoree, Gold Star father Khizr Khan, gained national prominence when they spoke at the Democratic National Convention in 2012 and 2016, respectively.

Khan, a Muslim immigrant, appeared at the DNC with his wife, Ghazala, to speak about their son, a U.S. Army captain who had died while serving in Iraq in 2004, and to challenge then-GOP presidential candidate Donald Trump’s proposed Muslim ban. Khizr Khan recently served on the U.S. Commission on International Religious Freedom.

The three honorees join other awardees, some of whom are known for faith connections beyond their work in realms such as politics or entertainment. They include the late Arizona Senator John McCain, who once publicly defined being a Christian to California megachurch pastor Rick Warren; civil rights lawyer and ordained minister Fred Gray; and actor Denzel Washington, who spoke onstage of his faith at a Museum of the Bible ceremony in June. Washington was not at the White House ceremony, reportedly because he tested positive for COVID-19; Biden said he would present him with the honor at a future date.

RELATED: C.T. Vivian adds Presidential Medal of Freedom to a lifetime of activism