(The Conversation) — What is a “monster”? For most Americans, this word sparks images of haunted houses and horror movies: scary creations, neither human nor animal, and usually evil.

But it can be helpful to think about “monsters” beyond these knee-jerk images. Ever since the 1990s, humanities scholars have been paying close attention to “monstrous” bodies in literature: characters whose appearance challenges common ideas about what’s normal.

Biblical scholars like me have followed in their footsteps. The Bible is full of monsters, even if they’re not Frankenstein or Bigfoot, and these characters can teach important lessons about ancient authors, texts and cultures. Monsterlike characters – even human ones – can convey ideas about what’s considered normal and good or “deviant,” disturbing and evil.

Sometimes, monsters’ bodies are depicted in ways that reflect racist or sexist stereotypes about “us” versus “them.” Literary theorist Jack Halberstam, for example, has written about how Dracula and other vampires reveal antisemitic symbolism – even on Count Chocula cereal boxes. Such images often draw on antisemitic tropes that have been around for centuries, portraying Jewish people as shadowy, bloodsucking parasites.

Biblical monsters are no less revealing. In the Book of Judges, for example, the judge Ehud confronts the grotesque Moabite king Eglon, who is fatally fat and dies in an explosion of his own feces when a sword gets stuck in his stomach – though most modern translations render this a bit more chastely: “[Eglon’s] fat closed over [Ehud’s] blade, and the hilt went in after the blade – for he did not pull the dagger out of his belly – and the filth came out.”

In describing Eglon, the text also teaches Israelites how to think about their Moabite neighbors across the Jordan River. Like their emblematic king, Moabites are portrayed as excessive and disgusting – but ridiculous enough that Israelite heroes can defeat them with a few tricks. 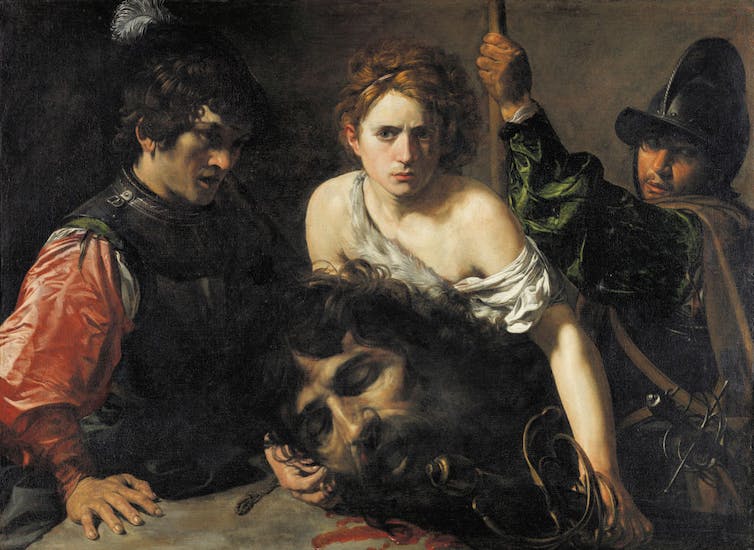 ‘David with the Head of Goliath and two Soldiers,’ from 1615. Found in the Thyssen-Bornemisza Collections.
Fine Art Images/Heritage Images/Hulton Fine Art Collection via Getty Images

Figures like Eglon and the famous Philistine giant Goliath, who battles the future King David, offer opportunities for biblical authors to subtly instruct readers about other groups of people that the authors consider threatening or inferior.

But the Bible sometimes draws a relatable human character and then inserts twists, playing with the audience’s expectations.

In my own recent work, I have suggested that this is exactly what’s going on with the Book of Job. In this mostly poetic book of the Bible, “The Satan” claims that Job acts righteously only because he is prosperous and healthy. God grants permission for the fiend to test Job by causing his children to be killed, his livestock to be stolen and his body to break out in painful boils.

Job is then approached by three friends, who insist that he must have done something to prompt this apparent punishment. He spends the rest of the book debating with them about the cause of his torment.

The book is full of monsters and already a familiar topic in monster studies. In chapters 40-41, God boasts about two superanimals that he has created, called Leviathan and Behemoth. A mysterious, possibly maritime monster called Rahab appears twice. Both Job and his friends refer to vague nighttime visions that terrify them.

And of course there’s another “monster,” too: Job’s test is instigated by “the Satan.” Later in history, this figure became the archfiend of Jewish and Christian theology. In the Book of Job, though, he’s simply portrayed as a crooked minion, a shifty member of God’s heavenly court.

But I’d argue there’s another “monster” hiding in plain sight: the man at the center of it all. As biblical scholars like Rebecca Raphael and Katherine Southwood have pointed out, Job’s body is central to the book’s plot.

Job stoically tolerates Satan’s attacks on his livestock and even his children. It is only after the second attack, which produces “a severe inflammation on Job from the sole of his foot to the crown of his head,” that he lets out a deluge of complaints.

To illustrate his suffering, Job repeatedly describes his bodily decay with macabre, gruesome images: “My skin, blackened, is peeling off me. My bones are charred by the heat.” And, “My flesh is covered with maggots and clods of earth; My skin is broken and festering.”

Job’s body is so transformed that he, too, can be seen as a “monster.” But while Job might think that the deity prefers ideal human bodies, this is not necessarily the case.

In the book’s telling, God sustains unique, extraordinary monsters who would seem, at first glance, to be evil or repellent – but actually serve as prime examples of creation’s wonder and diversity. And it is Satan, not God, who decides to test Job by afflicting him physically.

Some books in the Bible indeed view monsters as simplistic, inherently evil “others.” The prophet Daniel, for example, has visions of four hybrid beasts, including a winged lion and a multiheaded leopard. These were meant to symbolize threatening ancient empires that the chapter’s author despised.

The Book of Job does something radical by pushing against this limited view. Its inclusive viewpoint portrays the “monstrous” human as a sympathetic character who has his place in a diverse, chaotic world – challenging readers’ preconceptions today, just as it might have thousands of years ago.

(Madadh Richey, Assistant Professor of Hebrew Bible, Brandeis University. The views expressed in this commentary do not necessarily reflect those of Religion News Service.)