(RNS) — For days ahead of the official holiday on Monday (Aug. 1), many modern pagans around the world have already been celebrating Lúnasa, the first of three harvest holidays on the modern pagan calendar called The Wheel of the Year.

Lúnasa, or Lughnasadh, the holiday, is typically celebrated by modern pagans with rituals, feasts and sometimes games. It is one of the greater Sabbats in Wiccan traditions and is largely tied to the agricultural cycles and folk traditions of Ireland.

“Lúnasa was originally not a single-day holiday,” said Morgan Daimler, a witch and independent scholar who studies and writes about Irish folk culture and religion. “Lúnasa was the epic holiday out of the year,” Daimler explained. People were coming out of the “lean month” of July, when spring foods were largely gone, and the harvest had yet to come.

In fact, in Irish Gaelic, Lúnasa is the name for the month of August. Some sources say that Lúnasa was once celebrated in the weeks before and after the beginning of the month, Daimler noted, especially before the establishment of the modern Western calendar. “Whenever your harvest was going to start, that is when Lúnasa would start,” said Daimler, who uses the pronoun “they.”

RELATED: How some ‘Jewitches’ are embracing both Judaism and witchcraft

The festival ultimately became a loose combination of local Irish harvest customs that became blended over centuries. The day takes its name from the story of Lugh, a Celtic deity who fights and eventually beats Crom Dubh, also called Crom Cruach, a pre-Christian god and chthonic spirit intent on destroying the harvest. “Lugh wins the harvest for humanity,” Daimler said, saying that it is very likely that Lugh was the original template for the Christian missionary to Ireland, St. Patrick. “He came in and sort of replaced Lugh, but you can still see enough of the original story … to see how Lugh would be the original heroic being.”

Daimler began researching Irish folk traditions and culture at a young age after becoming fascinated with their family’s history. They eventually joined the Celtic Reconstructionist community.

Like other Reconstructionists, Daimler pored over folkloric texts, history and archeological finds to assemble a picture of the religious practices of pre-Christian Ireland. A Lúnasa tradition that survived into modern day is called well-dressing. “Entire communities process to a local holy well and dress them in flowers,” Daimler said. “It was thought that Lúnasa was the time it needed to be done.” While this tradition has mostly died out, they said, it was still being done across Ireland only 50 years ago.

In Ireland, the holiday is celebrated today with mostly secular festivals that include horse racing and other games. These festivals are similar to harvest festivals typically held in September or October in the United States.

Daimler no longer identifies specifically as a Reconstructionist but has not abandoned the traditions. On Lúnasa, Daimler and their family go wild berry picking — the fruits that are ready to be harvested at the time near their New England home.

Lúnasa is often confused with another Aug. 1 harvest holiday called Lammas, which literally translates to Loaf Mass. Originating from England, Lammas is a Christian holiday that honors the coming of the harvest. Breads made from the first fruits were traditionally taken to church as a gift.

While the two holidays have distinctly different origins, they both celebrate agricultural cycles. Daimler believes the conflation between the two happened in the 1970s to the 1990s, pre-internet, when access to source material was limited. Pagan authors did the best they could with what was available as they developed new earth-centered religions based on age-old folk traditions.

Not all modern pagans feel connected to Lúnasa and similar feasts, as many Westerners have lost touch with agricultural cycles. Some pagans find the holiday “silly” because its harvest celebrations don’t apply, Daimler said: July is never “lean,” and in many places the harvest starts in September.

Daimler also has seen pagans attempt to plant and harvest earlier in order to “cut and paste” the folk traditions into their modern practice. However, Daimler said that it’s better to work with the natural world around you and celebrate when the harvest comes around.

“Pagans talk about being an earth-centered religion, and the natural forces are so important to us,” said Daimler. This is why celebrating agriculturally based holidays is critical to modern pagan religious traditions. “We must remember that we are part of this world.”

Some pagans, particularly Wiccans, use the holiday’s mythology and its traditions as a metaphor for spiritual growth. Religious rituals and celebrations might center around celebrating one’s achievements and assessing one’s failures, rather than the literal harvesting of corn and wheat. But Daimler has one warning to anyone celebrating, whether they are harvesting berries, corn or personal achievements.

Though Lúnasa is not typically associated with fairies, Daimler said, they advise nonetheless to keep them in mind. One Lúnasa story holds that the Tuatha de Danaan, a magical race of beings, made an agreement with the Dagda, an Irish god, before they retired into the Irish fairy mounds. Fairy kind would help take care of the land, the animals and even the people, but in exchange, they were to receive a portion of the harvest.

“I leave a portion of my berries out every Lúnasa and so do my kids. I trained them well,” said Daimler. 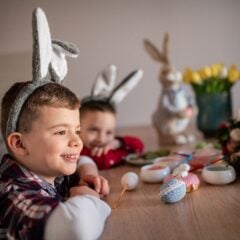 Catholicism
St. Brigid, the compassionate, sensible female patron saint of Ireland, gets a lot less recognition than St. Patrick
Follow us on Facebook!
Submit your photos to RNS