(RNS) — According to Bloomberg News, South Korea’s fertility rate dropped from .84 babies per woman to .81 in 2021, the lowest figure on record. If current trends continue, the number of people in South Korea will be the same in 2100 as it was in 1960. In response, the government has tripled the baby payment as a way to induce more childbearing.

This collapse in fertility is also evident in China and in many European countries, where the total population in many places has the potential to drop by half in the next eight years.

Religion has become a part of the conversation about declining birthrates. Recently, pastor and podcaster Dale Partridge tweeted about the “great sadness” of “God-denying” 39-year-old women who are intentionally single and childless who will realize in later years that they will have “a total sense of emptiness” for not finding a partner and having children.

For Partridge, rejecting the institutions of marriage and parenthood is to embrace a lifestyle that is antithetical to his understanding of God’s design for human beings — namely, that “they be fruitful and multiply.”

RELATED: When she doesn’t want a baby

But does religious belief actually have an impact on how people in the United States think and act about marriage and family? The General Social Survey has been asking questions about whether someone is married and whether they have children since the early 1970s. The results do point to religion as an important factor for many when it comes to making important life decisions. In a GSS question about marital status, respondents are asked to identify as married, separated, divorced, widowed or never been married. In 1972, about 14% of the American population reported that they had never wed. Evangelicals were just a bit lower at 9%. However, those without a religious affiliation reported a much higher likelihood of never being married. In 1972, 36% of them had never walked down the aisle.

Over time, the portion of Americans who have remained single has clearly climbed. In 2021, nearly 3 in 10 adults said that they have not married — double the rate in 1972. Evangelicals have also seen a significant increase, with 19% never having wed.

Among the so-called nones — those unaffiliated with any religious organization — the share of people who have never married, at 42% in 2021, has increased, but the rise has been far more modest. Still, that’s about 12 percentage points above the national average. “How Many Children Have You Ever Had?” Graphic courtesy of Ryan Burge

Religion doesn’t only impact the likelihood of entering into matrimony. It can have profound impacts on other decisions, such as when to have children or the number of children to have. That’s clearly shown by the General Social Survey. In the early 1970s, evangelical households had a little more than 2.5 children on average. That was just slightly higher than the average American, who was having 2.3 children. Nones were much, much lower than that. In 1972, the average none had 1.4 children.

There’s unmistakable evidence of declining fertility rates in the data as well. The average respondent reported having 1.8 children in 2021, a dip of .5 over the last five decades. Evangelicals were also reporting declining birthrates between 1972 and 2000, but those numbers have slightly rebounded from there. The average evangelical has about 2.1 children now, slightly above the national average.

For nones, there is also decline in fertility, but it’s much less severe. According to the most recent data, the average none has about 1.3 children, a slight increase from two decades ago, but still 50% below the national average. 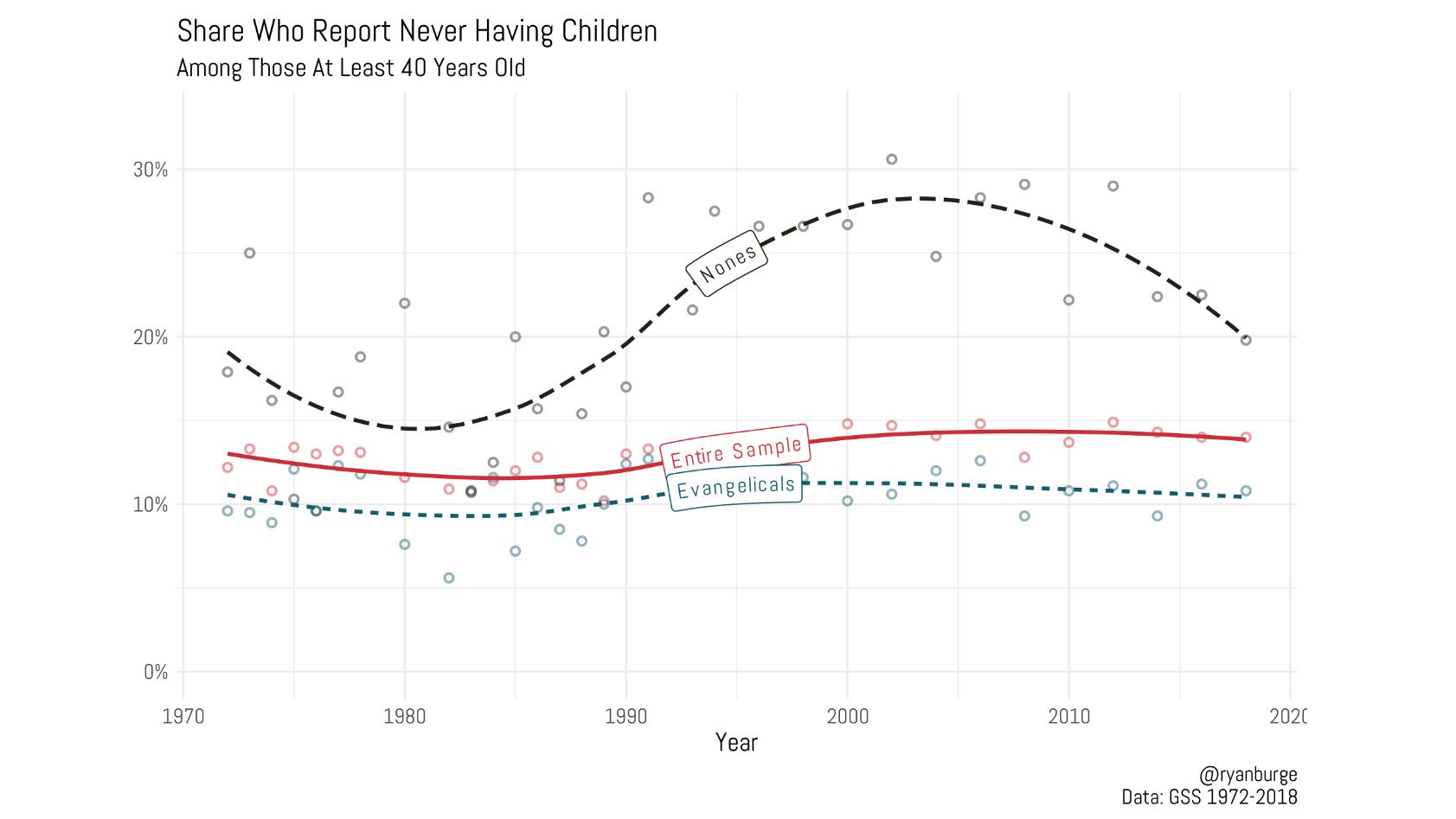 One curious development when talking about birthrates is the expanding trend of “child-free” individuals, who have declared they will never have children for a wide variety of reasons. There’s a community dedicated to these individuals on Reddit, boasting 1.5 million members.

This trend has yet to show up in the data, however. Looking at those who are at least 40 years old, little evidence supports the notion that the child-free movement has momentum in the general public. In the 1970s, about 13% of adults 40 or older had never had children. Today, it’s risen by perhaps 1 or 2 percentage points.

RELATED: The future of the church may belong to the fecund, but not the nuclear family

Even the nones are still having children, though their story is more complicated. In the 1970s, nearly 20% of nones were child-free before dipping slightly in the 1980s, and then peaking at 28% in the early 2000s. But from that point forward, nones 40 or older with no children dropped as a share of nones overall. They now make up about 20% of the group — 6 points higher than the national average, but far less than the nearly 15-point gap in 2004.

So while religion affects trends in marriage and offspring in sometimes unclear ways, the one loud message is for the nones: Their focus must be on conversion, not retention. While the unaffiliated nones have grown by leaps and bounds over the last three decades, their low birthrate means they will have to bring in new members who were raised in other faith traditions to maintain that momentum in the coming decades.

Donate Now!
Posted in
Ahead of the TrendChristianityEvangelicalFaithOpinionProtestantU.S.Unaffiliated/Atheism