(RNS) — In an article for The Gospel Coalition, Pastor Kevin DeYoung declares, “The future belongs to the fecund.”

DeYoung, pastor of Christ Covenant Church in Matthews, North Carolina, and a regular contributor to The Gospel Coalition website, was offering succor to conservative Christians who might have been reeling after the U.S. Supreme Court decision Monday (June 15) that expanded employment protections based on sex to LGBTQ individuals.

The post on TGC’s website, titled, “It’s Time for a New Culture War Strategy,” proposed that Christians not look to the Supreme Court to save society.

“What happens in D.C. matters. Elections have consequences,” DeYoung wrote. “But families have more.”

His new strategy, in short, is “have more children and disciple them like crazy.”

With his focus on the family theology, DeYoung pushes to the margins those whose lives don’t include bearing and rearing children. He echoes what so many Christians, conservative and otherwise, believe, if only subconsciously: Until you have a nuclear family, you have little place in the church.

Most obviously, this theology is wrong because it reduces women to their ability to bear babies and men to their ability to find a woman to impregnate. It dehumanizes both parents and children and even more so dehumanizes those without children, the single, the infertile and the married who have chosen to give their lives elsewhere. It denies and dishonors the image of God in which every human being is made.

Of course someone like me, who, at 32 years old, is single and childless, feels dehumanized by his suggestion. Having grown up in a Christian culture that taught me that the only path forward was marriage and motherhood, I’ve spent years unlearning and relearning what gives my life value.

The good news is DeYoung did not allow the word “fecund” to be used in its fullness. We can all be “fecund.” The definition of fecund is “producing or capable of producing an abundance of offspring or new growth; fertile.” To be fecund is to be fruitful.

What does it mean to be fruitful in the kingdom of God? Raising children is just one of an infinite number of ways we bring light into the darkness. Parenting is not the ultimate fruitfulness. Indeed, a hyperfocused approach to parenting, like DeYoung’s, can cause parents, and especially women, to miss the spirit’s call to fruitfulness outside of child rearing.

If my mom had parented like DeYoung suggests, she would never have had the capacity to be an educator who changed the lives of thousands of children, showing them the love of God. I am the Christian I am because of my parents, but I am only one of their many fruits. DeYoung argues that bearing many children will “renew the city.” Let’s examine the premise that it is the family that will renew the cities in which we live.

As a childless woman who does not expect to have kids, I am bearing fruit, not in spite of my childlessness, but because of it. I founded and currently lead a nonprofit that has served hundreds of women over the course of nine years. Personally, I pour into the lives of my friends’ children through sleepovers, reading dates, my presence at school functions and by supporting their parents. I have the flexibility to respond when a friend or family member has a crisis or rough day.

There is no doubt that the single and childless are equally fruit-bearing members of the kingdom of God. That was settled when God himself came in the form of a single, childless man.

To see the kingdom of God come more fully to earth, in fact, I suggest we unfocus on the family. The nuclear family is not the cornerstone of the church. That is Jesus, the single, childless man. Thriving families are wonderful witnesses to a hurting world, but as long as we imagine that this is where God stops, we’ll never, as DeYoung exhorts us, “rebel against the status quo,” saying “There is almost nothing more counter-cultural than having more children.”

The status quo is the nuclear family, and we go with the status quo until we intentionally invest in something new.  If we want to rebel against the status quo, let’s live in homes with more than our nuclear families. Hire single senior pastors. Share bank accounts with people who don’t have our last name. Preach an entire series on singleness. Have Thanksgiving with people to whom we are not related.

I am rebelling, not only against our culture’s status quo, but against the church itself — a church that is unrepentant in its idolatry of the nuclear family. My very life is a witness to the church.

I am not a womb waiting to witness. My single childlessness is my witness.

(Holly Stallcup is the founder and executive director of Rise, a nonprofit “committed to seeing the Church become the best place to be a woman.” The views expressed in this commentary do not necessarily reflect those of Religion News Service.) 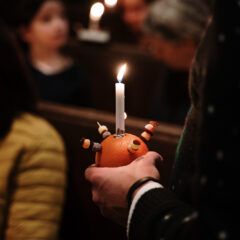 One Eye Squinted
Childless at Christmas