(RNS) — Queer students like Veronica Bonifacio Penales, who have been protesting religious university policies they call discriminatory and homophopic, often find themselves confronting the same question: “Why would you go to a Christian school if you are LGBTQ?”

For many of these students, this fight at religiously affiliated universities is part of a larger push happening from within Christianity toward more inclusive beliefs to, as activists at Seattle Pacific University put it, “deconstruct harmful theologies on sexuality, gender and queerness.”

And, as they’ve reminded their thousands of social media followers: “You can be queer and Christian.”

“We shouldn’t have to compromise where we go because they don’t want to accept who we are,” said Penales, a student at Baylor University, a Baptist school in Waco, Texas. “Baylor has taught me what I don’t want my religion to be.”

Within the last two years, students at religious schools across the country have made headlines pushing back against university policies regarding LGBTQ students or staff.

They’ve staged a monthlong sit-in at Seattle Pacific University, a private school associated with the Free Methodist Church, against a policy that forbids the hiring of LGBTQ people. They’ve called on Baylor University, that affirms marriage between a man and a woman as the “biblical norm,” to officially recognize an LGBTQ student advocacy group. They’ve protested at Brigham Young University after The Church of Jesus Christ of Latter-day Saints, which operates the school, said same-sex romantic behavior was “not compatible” with university rules, despite the removal of the “homosexual behavior” section from its Honor Code, the Salt Lake Tribune reported. 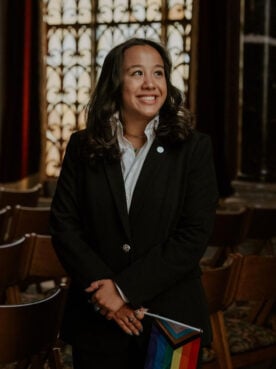 Penales, along with students at more than 100 campuses, are now planning to walk out of school on Tuesday (Oct. 11) to, among other things, protest religious exemptions to Title IX that they say allow for the discrimination and erasure of LGBTQ students. They’re urging for Title IX enforcement so all faculty, staff and students, including those who are LGBTQ and from minority communities, “have the ability to exist completely as themselves.”

Organized by the nonprofit Religious Exemptions Accountability Project and the Black Menaces — a group at BYU, which has expanded to numerous college campuses and has gone viral for their TikTok videos interviewing their largely white peers about issues concerning race — the walkout will be happening at religious, public and secular campuses, including high schools. The nationwide student protest, dubbed “Strike Out Queer-Phobia,” coincides with National Coming Out Day.

Students from Azusa Pacific University, an interdenominational Christian school in Southern California, will be walking out as they demand gender and sexuality training for staff and faculty. They also want staff and faculty to be allowed to include their pronouns in email signatures. LGBTQ singer and songwriter Grace Baldridge and other local artists will be performing nearby after the walkout.

At Denver University, students will be walking out in solidarity with queer students at BYU. And at Western Illinois University, Casa Latina Cultural Center will be participating as a way to urge “institutions to implement Title IX to these religious universities who are exempt.”

“We are privileged here at WIU, especially since students are protected by Title IX,” they wrote.

“I can’t fight for POC (people of color), or Black people without fighting for queer people,” he said.

The Black Menaces in late August urged mandatory anti-racism training and sessions for staff, faculty and students after a Duke volleyball player, who is Black, alleged she was repeatedly called a racial slur by someone sitting in BYU’s student section. BYU said its investigation —which included the review of video and audio recordings as well as outreach to more than 50 people at the event — found no evidence that fans used racial slurs. 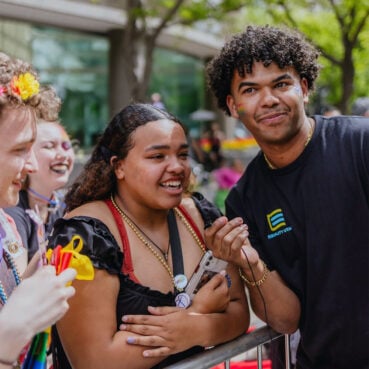 After Black Menaces chapters became active on other campuses this summer, Stewart-Johnson said he’s noticed that students in religious campuses answer their questions differently. They’re emboldened by religion, he said, “to push out their ideas, regardless if those are homophobic or racist, because they feel like God is empowering them.”

To Max Perry Mueller, a historian of race and culture, “the work to address racism within Mormonism falls to people not in the center but on the periphery of Mormonism,” he wrote in an essay in Slate. He noted in his essay that restrictions that banned Black people from full membership in the LDS church remained in place until 1978.

Mueller said it’s crucial for university faculty, staff and nearby residents to listen to student activists.

“They’re going to be future alumni who care about the institution … They’re coming into adulthood here so they have a vested interest,” Mueller told RNS. “With any institution … you have a better sight line when you’re on the margins.”

According to Paul Southwick, director of the Religious Exemption Accountability Project, universities like BYU have ​​a “system of discrimination that is on the brink of collapse.”

Last spring REAP filed a lawsuit against the U.S. Department of Education on behalf of dozens of LGBTQ students at federally funded Christian colleges and universities.

A number of these schools are part of the Council for Christian Colleges and Universities, a global association of more than 180 Christian higher education institutions. Campus attorneys, public relations professionals and outside counsel gathered at a CCCU conference in late September to talk about Title IX and accreditation concerns. The conference was set to feature a “public relations crisis simulation and discussions about how to ensure mission fidelity legally and through good policy.” 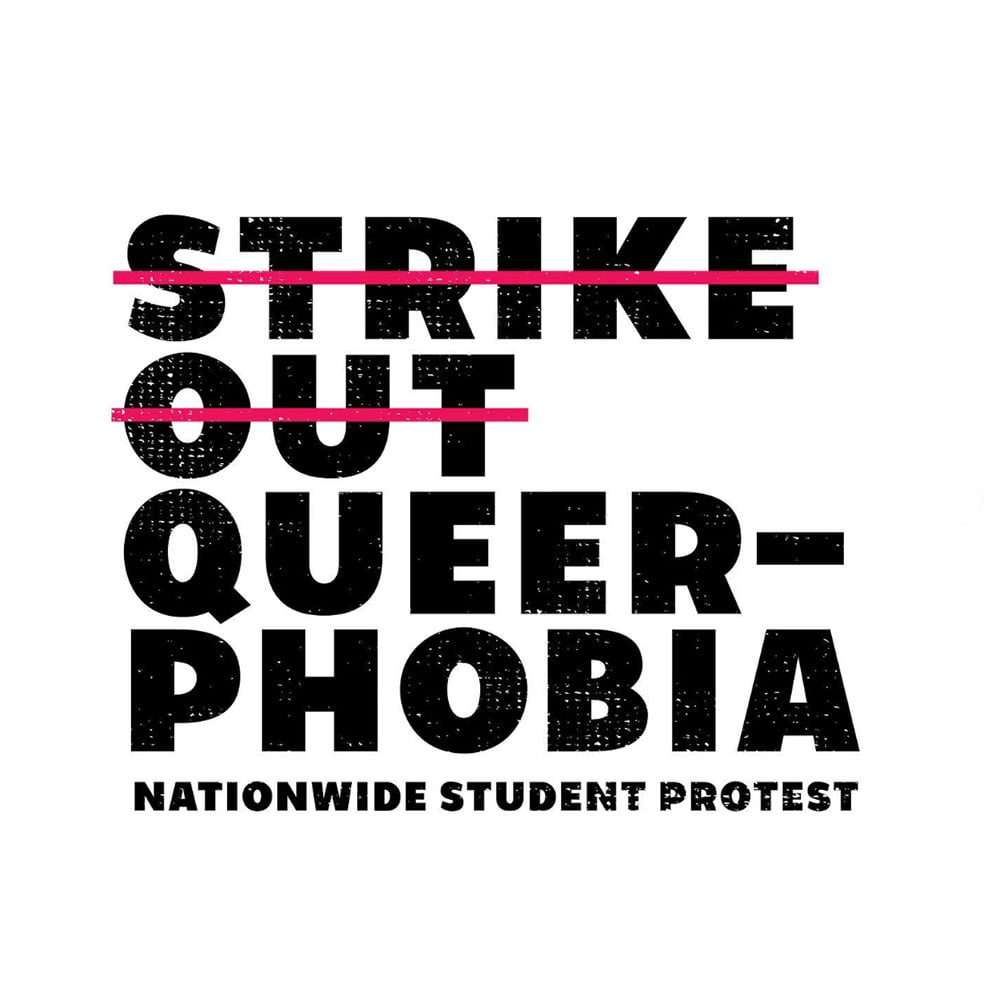 Amanda Staggenborg, chief communications officer for the CCCU, said the council “encourages free thought and ideas as protected in the First Amendment.”

“We also support our member institutions and their commitment to Biblical standards in their mission work. We ask for peaceful debate, not campus disruption, as cultural issues are discussed and challenged in academia,” Staggenborg told RNS through email.

Tensions over LGBTQ-related policies have particularly intensified this year at SPU, where students will also be walking out.

Students and faculty have sued leaders of the school’s board of trustees for refusing to end the hiring policy. Additionally, the Washington state attorney general is also investigating SPU for potential illegal discrimination against LGBTQ people due to the school’s hiring practices.

“Our story is not unique,” said Chloe Guillot, a graduate student at SPU who is listed as a plaintiff in the lawsuit against the board of trustees. “You can just see there’s this pattern and movement happening of students and employees at these Christian universities finally saying, ‘enough is enough.’”

While students and faculty claim the trustees’ position threatens SPU’s reputation, school leaders see the blowback as a violation of the university’s right to religious freedom. SPU leaders have sued the state of Washington to “protect its freedom to choose employees on the basis of religion, free from government interference or intimidation.”

But the way Guillot sees it, “it’s not about us persecuting you for your religion, because we share your religion.”

At Baylor, Penales said she has found her voice in “advocating for this work.”

The university earlier this year granted its first charter in history to a new LGBTQ-focused student group, but its statement on human sexuality that upholds “purity in singleness and fidelity in marriage between a man and a woman” still stands, the Texas Monthly reported. The LGBTQ advocacy group that Penales is involved with remains unchartered.

Penales, who is also a plaintiff in the class-action lawsuit filed by REAP, is a main organizer of the walkout. She loves Baylor so much, she said, that she is willing “to continue this work to make a change.” But, she added: “I love me more to also do that work.”