(RNS) — Students from Seattle Pacific University, a Christian school associated with the Free Methodist Church, entered the fourth day of a sit-in protesting the board of trustees’ recent decision to retain a policy prohibiting the hiring of LGBTQ people.

The board’s decision on Monday (May 23) means that the university’s expectations for employee conduct “continue to reflect a traditional view on Biblical marriage and sexuality, as an expression of long-held church teaching and biblical interpretation,” according to a statement from the board.

In the statement, board Chair Cedric Davis said trustees made their decision, “which brings complex and heart-felt reactions,” in order for the university to “remain in communion” with the Free Methodist Church USA.

“The board acknowledges that there is disagreement among faithful Christians on the topic of sexuality and identity,” the statement read.

Seattle Pacific University students are currently on day 3 of a sit-in protesting a decision to uphold homophobic policies on our campus. We have support from faculty, staff and alum who also want change.
RT TO SPREAD AWARENESS and pressure our university to address our demands pic.twitter.com/wHgE40iAeO

Students walked out of class on Tuesday in reaction to the board’s failure to end the policy that they have called homophobic and discriminatory. They hoisted a rainbow-colored banner that read “Stop debating our sex lives” and chanted, “We want gay faculty!” Friday marked the fourth day of sit-in protests outside the president’s office.

Students say the Free Methodist Church has no day-to-day “impact on campus culture.”

The students are demanding the board reveal how each trustee voted and that “every trustee who voted in favor of upholding the discriminatory policy must resign.”

The Associated Students of Seattle Pacific are also calling on Bob Ferguson, the attorney general of Washington, to take legal action against the board of trustees for failing to act in the school’s best interest.

“We feel they are not fulfilling their duties to put aside their personal interests and do what’s truly best for the university,” said Chloe Guillot, the Associated Students’ vice president of ministry, who expected the sit-in to continue through the weekend.

Students, in a letter to the board chair, said they “have no plans on moving” until their demands are met.

“We are being cared for by faculty, staff, and alumni. They have provided us with meals, sleeping materials, and other tangible support in our mission to protest your vote,” they wrote. “They have also provided us with emotional support, extensions, and all things necessary because they believe in the cause we are advocating for.”

“We have an entire community behind us,” they said in the letter. 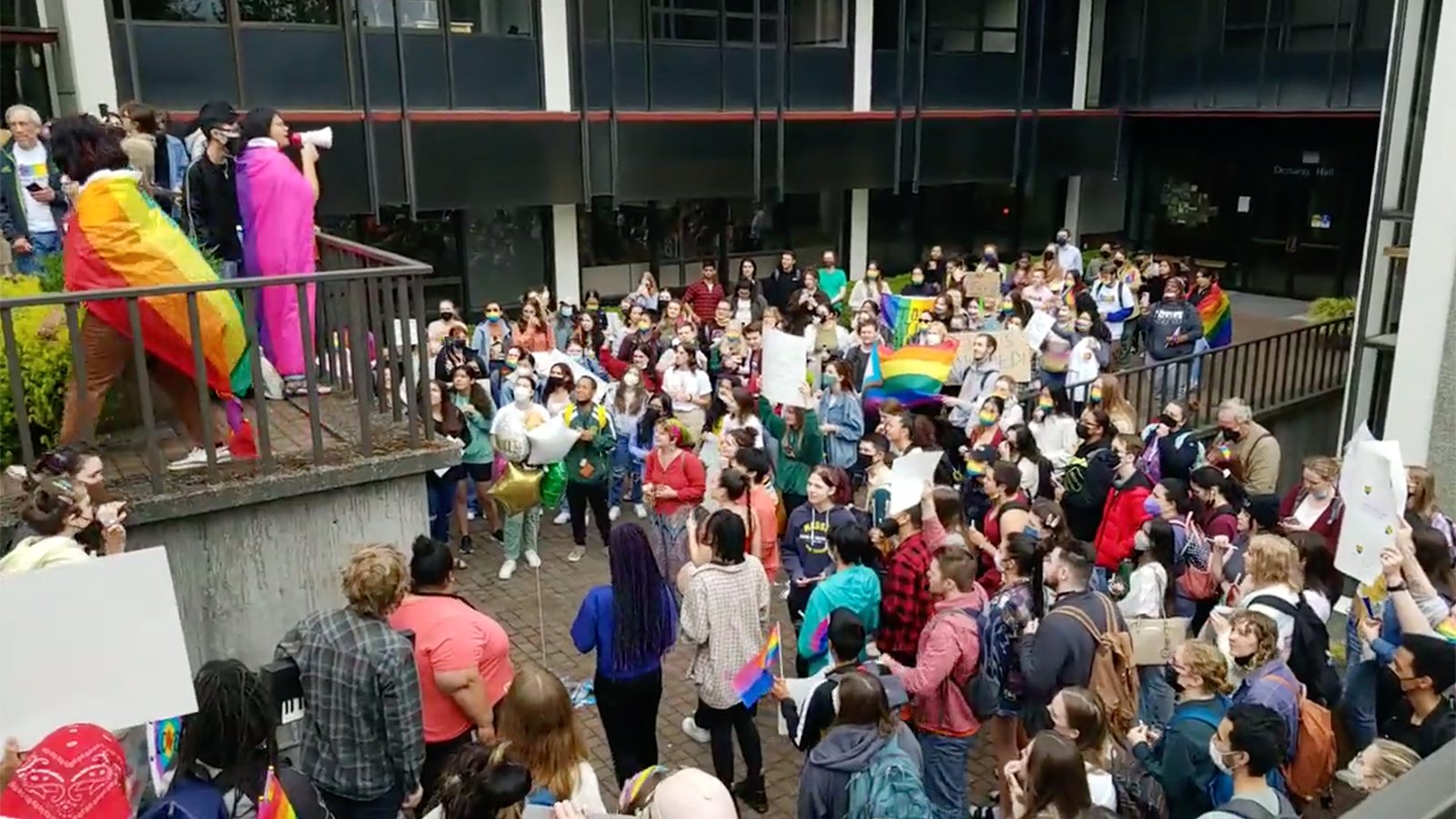 People demonstrate at Seattle Pacific University, May 24, 2022, after the board of trustees recently decided to retain a policy that prohibits the hiring of LGBTQ people. Video screen grab via Twitter/Jeanie Lindsay

In April 2021 the university’s faculty took a vote of no confidence in its board of trustees after members of the board declined to change the hiring policy. The no-confidence vote was approved by 72% of the faculty.