As the play opens, the first thing you see is a Christmas tree.

If you know anything about the German-speaking Jewish bourgeoisie of central Europe in the late 1800s and early 1900s, the sight is jarring, but not shocking. That was what many Jews sought, in varying degrees — upward mobility, assimilation, sometimes to the point of conversion and Jewish self-erasure, combined with contempt for poorer and more traditional Eastern European Jews, of Galicia.

As Tom Stoppard‘s new play makes clear: None of it worked. None of it could save the Jews.

“Leopoldstadt” (named for the old Jewish district in Vienna) is an epic play about several generations of the Merz-Jakobovicz family, from the late 1800s to the 1950s.

These are upper middle-class Viennese Jews — fully Jewish, partly Jewish, ambivalently Jewish (with an on again, off again brit ceremony serving as a handy and humorous metaphor), and “ex”-Jewish (“You seem to think becoming a Catholic is like joining the Jockey Club.”).

Both the stage production and the playbill provides the audience with an elaborate family tree. It barely helps you keep the cast members straight — 24 of them are family members. The family members themselves can barely figure it out. The play shows how the growing antisemitism in Vienna chipped away at this family — complete with scandal, sly humor, and Stoppard’s typical fixation on the arcane.

With every act, we move through the decades. The opulence of the family living rooms slowly disappearing, until, by the end of the play, the stage becomes almost entirely bare.

For Stoppard, this play is not mere art. It is personal. Like the late Madeline Albright, Stoppard discovered his Jewish origins late in life, after having thought himself to be English. (Like Albright, Stoppard’s roots are Czech, not Viennese, but the parallel holds). Late in the play, Stoppard inserts his own doppelganger into the narrative, as a surviving member of the family recounts the horrors that have ended their lives and their fortunes, listing the fate of every family member: “Auschwitz,” “Auschwitz,” “Auschwitz.”

Coming at this late stage of the playwright’s distinguished career, “Leopoldstadt” is an elegy to all that Stoppard had lost, and/or that he never knew, but might now want to reclaim.

Stoppard writes in the notes to the play:

When I was born, in July 1937 in Zlín, a small town in Moravia, Czechoslovakia, my name was Tomas Straussler – Tomik to my mother and father. We left Czechoslovakia – my parents, my brother Peter and I – when the German army moved in. By the time I understood that there was a connection between these two events, I was an English schoolboy.

So we were Jewish? My mother would give a little frown and go “Tsk!” in her way and say, “Oh, if anyone had a Jewish grandparent at that time…”

I believe I understand her “Tsk!” It was less to do with denial than irritation. To ask the question was to accept the estimation put on it not by her but by the Germans. She had no sense of racial identity and no religious beliefs. Of course there were Jews in Zlín, she said, but they were proper Jews who wore black hats and went to synagogue and the rest of it, Jews who were Jewish…

As I understand it, if I do, “being Jewish” didn’t figure in her life until it disrupted it, and then it set her on a course of displacement, chaos, bereavement and – finally – sanctuary in a foreign country, England, thankful at least that her boys were now safe. Hitler made her Jewish in 1939. By the spring, comfortably before the European war started, all that was behind her, literally…

Which brings me to the popularity of this play. Having completed a triumphant run in London, it is now playing to huge Broadway audiences — arguably, the hottest ticket in town. 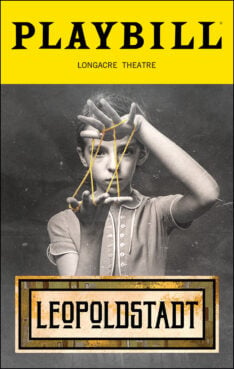 For me, the reason is clear. “Leopoldstadt” is a vindication of political Zionism.

“Leopoldstadt” is a condemnation of Jewish complacency. The members of the family hope that their imagined status in Viennese society would ward off the genocidal hatreds that are unfolding before their (and our) eyes — sometimes, off stage, in the form of mere but ominous rumbling. They believe themselves too rich, too comfortable, and too cultured. They simply cannot get their minds around what is happening, or is about to happen.

But, that complacency does not go unchallenged.

At the very beginning of the play (1899), Hermann (who is now Catholic) and Ludwig are debating the new essay by Theodor Herzl, the founder of political Zionism.

For Hermann, Viennese culture is everything. Society has accepted them. Antisemitism is a thing of the past.

My grandfather wore a caftan, my father went to the opera in a top hat, and I have the singers to dinner — actors, writers, musicians…We’re the torchbearers of assimilation…We wept by the waters of Babylon, but that’s gone, and everything after, expulsions, massacres…gone like the Middle Ages…all rolled up and dumped like an old carpet, because Europe has gone past them…

Ludwig is unconvinced. He sees the antisemitism of the Christian Social Party; “Our popular mayor [Karl Lueger] is the orator of anti-semitism.”

In Galicia the Jews are hated by the Poles, in Bohemia by the Germans, in Moravia by the Czechs. A Jew can be a great composer. He can be the toast of the town. But he can’t not be a Jew….the only people without a territory…So when someone [Herzl] comes along and says, “We lost our territory but we can have it again, a country where we’re not on sufferance, where we can be what we once were…Where we can be warriors…”

Jews must no longer live on sufferance. That is the goal of Zionism.

“Leopoldstadt” is a condemnation of Jewish powerlessness.

Hermann describes the moment that he decided not to be a Jew. His grandfather told him that a man had taken his hat and thrown it into the street.

Stoppard — again, no stranger to the arcane — found that incident in the life of Sigmund Freud, who told that story about his own father. That childhood memory might have been what converted the young Freud to Zionism.

When Fritz, a young cadet, insults Hermann’s wife, Hermann demands that the two men engage in a duel. Fritz laughs at the request.

I can’t fight a duel with you. In my regiment an officer is not permitted to fight a Jew… since a Jew is devoid of honor from the day of his birth, it is impossible to insult a Jew. A Jew cannot therefore demand satisfaction for any suffered insult.

Hermann protests: “I’m a Christian.” Fritz responds: “In my regiment, an officer is not permitted to fight someone whose mother was a Jew.”

For audiences, this play will bring up its own contemporary ghosts: ambiguity and ambivalence about Jewish identity, immigration policy, Christian nationalism (which has its antecedents in central European fascism and Nazism), politicians who bray antisemitism, like Donald Trump, Marjorie Taylor “Jewish space lasers” Greene, and Pennsylvania gubernatorial candidate Doug Mastriano.

At the end of the play, Stoppard introduces us to his own character — Leonard Chamberlain, an Englishman whose Jewish identity had been hidden, or suppressed from him.

Nathan, who has survived the Holocaust, gently berates him for his failure of memory:

“No one is born eight years old. Leonard Chamberlain’s life is Leo Rosenbaum’s life continued. His family is your family. But you live as if without history, as if you throw no shadow behind you.”

It is as if Tom Stoppard is saying: For most of my life, I threw no shadow. No longer.

It is as if Tom Stoppard, already in his mid eighties, is reclaiming the young Tomas Straussler.

“Leopoldstadt” is occasionally didactic, but no matter. It is a triumph — of story, of theater, and yes, of Jewish history.

As for me, I left the theater realizing what my job description has been, all along.

To make sure that Jews live with history, and that they throw shadows behind them.