(The Conversation) — Disputes over religious freedom and LGBTQ rights in the United States have led to some of the most high-profile judicial controversies – and 2022 is no exception. For example, the Supreme Court will hear arguments Dec. 5, 2022, about whether a designer can refuse to create wedding websites for same-sex couples; a ruling is likely in late June 2023.

Lately, many of these controversies have begun in educational settings, both in K-12 schools and on college campuses. As a professor of education law who often writes about First Amendment issues in schools, I see these cases, which are trying to balance tensions between fundamental rights, as potentially shaping new precedents.

Cases at Yeshiva University, a private Orthodox Jewish school in New York City, and Seattle Pacific University, a small Christian school, have made headlines, but they are not the only examples. Similar concerns arose at Catholic high schools in Indiana, where courts upheld the dismissals of employees in same-sex marriages, as well as Samford University in Alabama, where campus officials denied a student request to form a club for law students who are LGBTQ.

The dispute at Yeshiva University emerged when officials rejected the YU Pride Alliance’s request for official recognition, saying it was inconsistent with the school’s religious values.

The Pride Alliance filed suit alleging that the university violated a provision of the New York City Human Rights Law, which bans discrimination based on sexual orientation and gender. After a state trial court rejected Yeshiva’s defense that it should be exempt because it is a religious institution, the school appealed to the Supreme Court, which granted a brief stay of the order on Sept. 9, 2022.

Five days later, however, the Supreme Court vacated the stay: In other words, the justices declined to block the order that Yeshiva officials recognize the club.

The court did not address the merits of the claims, but told university officials that they must exhaust other avenues of appeal in state courts before they can ask the Supreme Court to decide. Still, four justices dissented, their concern about the case clear.

“The First Amendment guarantees the right to the free exercise of religion, and if that provision means anything, it prohibits a State from enforcing its own preferred interpretation of Holy Scripture,” Justice Samuel Alito wrote in his dissent. Joined by Justices Clarence Thomas, Neil Gorsuch and Amy Coney Barrett, Alito added, “Yet that is exactly what New York has done.”

Rather than comply with the order, Yeshiva’s administration suspended all student clubs while it continued to fight the case. It soon offered its own official club, saying it was for LGBTQ students “striving to live authentic Torah lives.” The dispute persists, however, because the Pride Alliance continues to seek recognition.

A 2010 Supreme Court case, Christian Legal Society v. Martinez, provides useful precedent as to student groups. In a 5-4 decision, the justices decided that officials in a public law school in California could implement a policy requiring a religious student group to admit “all comers,” meaning all who were interested, even if they disagreed with its core beliefs.

Now, the Yeshiva and Samford disputes are testing the limits of that precedent, albeit with a twist. While the 2010 case involved the actions of student groups, these controversies involve employers’ religious beliefs and actions, which are protected under Title VII of the Civil Rights Act of 1964.

The second set of recent cases involves employment – specifically, whether officials in faith-based high schools can fire staff for marriages that violate their beliefs.

In three separate cases from Indiana, courts have upheld the terminations of a supervisory guidance counselor, another guidance counselor and a teacher at Roman Catholic high schools who married same-sex spouses.

The Seventh Circuit court,
the Supreme Court of Indiana and a federal trial court largely based their judgments on the Civil Rights Act of 1964, which prohibits employment discrimination on a variety of personal characteristics, including race, color, religion, sex or national origin. In 2020’s Bostock v. Clayton County, the Supreme Court interpreted Title VII as extending protection against employment discrimination to individuals who are gay and transgender.

Most notably for these controversies, though, Title VII grants far-reaching exceptions for faith-based employers. Usually referred to as the “ministerial exception,” this provision allows officials in religious institutions to dismiss individuals who do not comply with the dictates of the employer’s faith, or to not hire them in the first place.

To be excluded from the reach of Title VII, employees do not need to serve in formal, ordained ministerial positions. Still, employers must prove that those employees’ duties are integrally related to institutional spiritual missions. In the Indiana cases, courts decided that school officials had met that requirement. 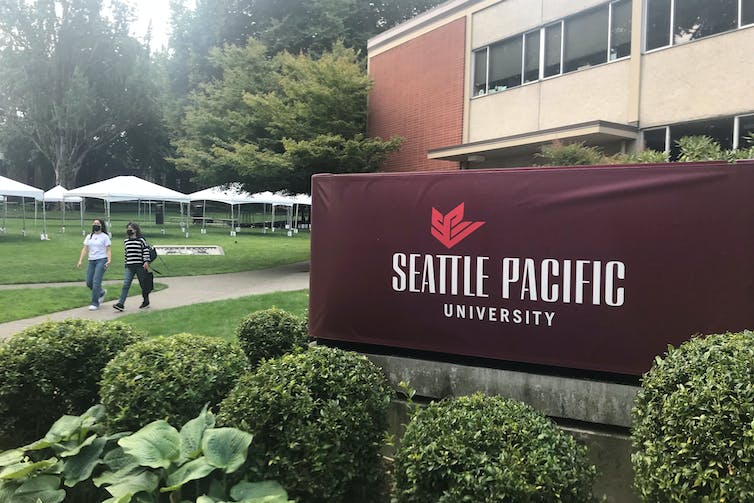 A group of students, faculty and staff have sued leaders of Seattle Pacific’s board of trustees over an employment policy they say is discriminatory.
AP Photo/Chris Grygiel

A similar kind of dispute arose at Seattle Pacific University in Washington state, where employees and students challenged a campus policy banning employees from same-sex marriages. In the wake of the discrimination claim filed against campus officials, the school filed its own case to prevent the state attorney general’s investigation into whether the charges have merit. A federal trial court rejected that attempt, and the investigation continues.

Although it has not yet led to litigation, a like controversy in Pennsylvania reached a different outcome, revealing a different perspective about the rights of LGBTQ employees on a campus. Controversy arose in May 2022 when officials at Eastern College, which is affiliated with the American Baptist Churches USA, reversed their policy of not hiring or retaining employees who are LGBTQ, adding sexual orientation to their employment nondiscrimination policy. As a result, Eastern put its membership in the Council for Christian Colleges and Universities in jeopardy because council officials said members’ policies should align with “the historic Christian view of marriage.”

The sensitive issues underlying these disputes go to the very heart of what it means to be human: how individuals and organizations can live in ways that are consistent with their personal values and needs, and how to balance religious freedom with freedom from discrimination. These controversies bear watching closely, I believe, because they are likely to have a profound impact on the shape of American society, and the next generation’s education.