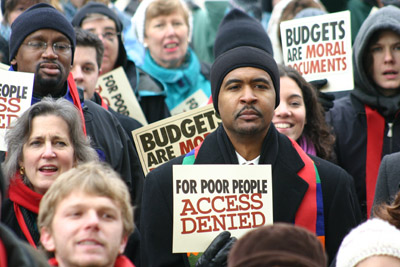 But efforts to save funding are meeting resistance — not only from number crunchers, but also from others with different views of what constitutes moral budgeting.

The conscience-tweaking initiatives are popping up just as lawmakers work to shrink trillion-dollar annual deficits. Last week, 300 leaders from Catholic social ministry organizations left a Washington-area conference to lobby their representatives and senators. Sojourners, an evangelical ministry with a social justice focus, is raising money for bracelets and ads asking, “What would Jesus cut?”

“Our job is to provide the moral voice that says, `You don’t cut the poor first,”‘ said Kathy Saile, director of domestic social development for the U.S. Conference of Catholic Bishops. “But thus far in this recession and economic crisis, the only people who’ve been asked to sacrifice have been the poor.”

Under current proposals, programs that target the poor would face cuts of much deeper proportion than other areas of the budget, according to Stephen Colecchi, director of the USCCB’s Office of International Justice and Peace.

Moral arguments aren’t just niceties for lawmakers to consider once the hard-nosed economic analyses are done, according to Wayne Fields, executive director of the John C. Danforth Center on Religion & Politics at Washington University in St. Louis. On the contrary, he said, budget pressures and religious lobbying efforts can help reveal a public figure’s depth of commitment.

Others, however, see a different moral imperative: fighting wasteful spending. The one-million-member Teaparty.org group encourages “traditional family values” and calls for an end to federal deficits. President Dale Robertson says government-funded anti-poverty programs are vulnerable to fraud and abuse in the absence of sufficient accountability. For example, he cites the scandal-plagued Global Fund, which receives taxpayer dollars for overseas projects and recently reported $34 million missing.

“It’s wrong, it’s uncharitable and it’s unchristian to give good money after bad,” Robertson said. “It’s almost like you’re destroying this nation because you’re not solving the problems … Until we begin to hold (programs) accountable, cut everything.”

World Vision, a Christian relief organization, gets about 10 percent of its budget from the government, according to Robert Zachritz, its director of advocacy and government relations.

Calls to preserve funding for poverty assistance programs are coming from a diverse swath of religious communities, including the Religious Action Center of Reform Judaism and Hindu American Seva Charities. Yet while lobbyists hear a divine mandate, Americans on the whole don’t seem convinced.

In a February survey by the Pew Research Center, global poverty assistance was the only area out of 13 categories where more respondents called for spending cuts (45 percent) than called for a spending increase (21 percent). What’s more, cuts to global poverty assistance were equally favored by Catholics, evangelicals, mainline Protestants and people with no religious affiliation.

Socially conservative lobbyists are largely staying out of debates about anti-poverty programs. Groups including the Family Research Council, Focus on the Family and the Traditional Values Coalition have focused efforts on defunding Planned Parenthood, an abortion provider.

People on both sides agree that if anti-poverty programs suffer substantial cuts, religious organizations will bear more responsibility for feeding the hungry and meeting other basic needs. But some advocates for sustaining public funding say such a backup plan is more ideological than realistic.

“Churches simply have not put in their budgets the kind of funding that would be required to feed nine to 10 million people,” said Robert Parham, executive director of the Baptist Center for Ethics in Nashville, Tenn. “So it’s dishonest for politicians to shift the responsibility away from the government to the church.”