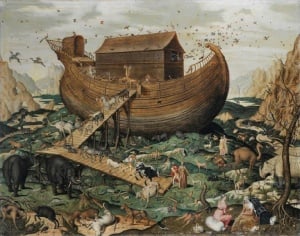 Oh, you wanted, like, religious news? (Wait, something else happened today?)

Well, okay, fine. Keeping with the Apple theme: While some might call it the "Jesus Phone," apparently the first Jewish news app - specifically for the Jewish Journal out of L.A. - is now for sale on Apple's app store.

Looks like Paramont Pictures and New Regency are planning to make a $150 million version of the Biblical epic "Noah" based off a graphic novel. No word on whether lawsuits from makers of "The Perfect Storm" are imminent. Also no word on whether there will be a sequel (because they'd need to make them two-by-two, get it?!)

Sarah Posner at over Religion Dispatches asks "Where are the Pastors at Occupy Wall Street?"

Finally, today's Tweet of the Day comes from Rabbi Rami, who notes something interesting about God's "needs"

@rabbirami - God wants you to serve Him always. God is very needy. #quote