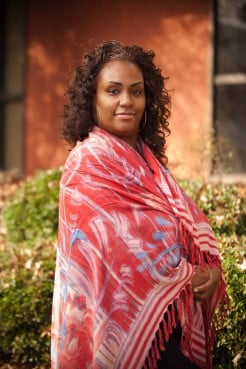 Mandisa Thomas is founder of Black Nonbelievers, an Atlanta-based group of atheists.

(RNS) As a child, Alix Jules saw people in church speak in tongues, tremble, fall and have what appeared to be very genuine connections with God.

But not him. “I never tingled,” he said.

By his twenties, Jules was an atheist. But he never told his family, who were deeply rooted in their predominantly black Catholic congregation. They believed he was having a crisis of faith — turned off by organized religion but still a believer. For years, he let them think that.

Then came the terrorist attacks of Sept. 11, 2001, an event in which religion played a role.

“On September 12, I used the word 'atheist' for the first time,” said Jules, who lives in Texas. “It wasn't too long after that my family stopped returning my phone calls.”

Now, at age 37, Jules has been ostracized  by his mother and cousins. His story is typical of many African-American atheists who say that to 'come out' as nonbelievers in their community is to risk everything — friends, family, business ties, even their racial and cultural identity.

“There is an idea that it is mandatory for blacks to believe in God,” said Mandisa Thomas, founder of Black Nonbelievers, an Atlanta group.

Now, a growing number of African-American nonbelievers are reaching out to others in their communities to help them confront these challenges. They are calling on atheists of all colors to make the fourth Sunday in February — Black History Month — a “Day of Solidarity with Black Nonbelievers.”

About 15 groups in as many cities — Dallas, New York, Chicago, Los Angeles — have scheduled events for Feb. 26. Some will share a meal, others will make formal presentations and discuss the role of African-American freethinkers in history. But the real goal is to let closeted black atheists know they are not alone.

“We lend an ear,” Thomas said. “We can say, 'I understand what you are going through because I've been through it.'”

The Day of Solidarity originated last year with Donald Wright, a Houston consultant who has written about his own journey from the black church to atheism. Fellowship with other atheists is critical, he said, if black nonbelievers are to move not only out of the closet, but also into the mainstream of American life.

“Emails, Facebook, Twitter, and blogging cannot replace face-to-face communication,” Wright said in a 2011 interview with the blog Black Skeptics Group. “As nonbelievers, we must become more visible and our voices heard.”

But Anthony Pinn, an expert on African-American religion at Rice University in Texas, said it is a mistake to assume that all churchgoing African-Americans are believers. Like secular Jews who maintain ties to a synagogue, some African-Americans remain in the black church for the services it provides — child care, counseling, for example — and for its connection to black culture.

“The sermon is the price you pay for that,” Pinn said.

African-American atheism may be on the rise. Black Atheists of America, a Facebook group, has grown from 100 members to more than 3,400, and Black Nonbelievers, founded by Thomas in 2010 in Atlanta, recently expanded to a national organization. In January, African Americans for Humanism launched a billboard campaign to nonbelievers of color, and has since grown by one new chapter, in Detroit.

Much of the interest is coming from younger African-Americans. Debbie Goddard, director of African Americans for Humanism, reports three new campus-based chapters — a first for that organization.

Monica Miller, a religious studies fellow at Lewis and Clark College, studies humanist attitudes among younger African-Americans. Her work, she said, shows “overwhelmingly” that nontheism is flourishing among them.

She believes many young African-Americans possess “an inherited religiosity” that pays lip service to faith to appease family members and maintain status in their communities, which are sometimes overwhelmingly religious.

It is these people that the Day of Solidarity is intended to reach.

Jules will mark the day in Dallas, where he is a leader in the Dallas-Fort Worth Coalition of Reason. He is one of its more public members, smiling down from one of AAH's billboards, which reads “Doubts about religion? You are not alone.”

Jules does not feel alone, despite the death threats, condemnations and charges of being a “race traitor” he has received since the billboard went up.

“I have found a bigger family in my local community,” Jules said. “They are all freethinkers, all races and they are nonjudgmental.”