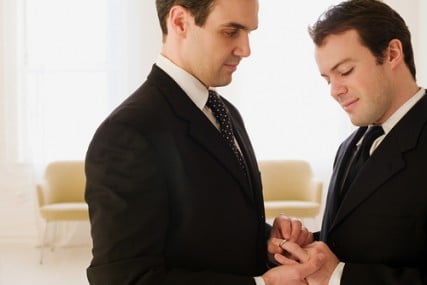 After several years of study, the Episcopal Church has released a draft of what same-sex marriage rites would look like. An important caveat: these are just drafts, and it will likely be years before any final liturgy is approved for official use across the church.

Episcopalians in states that allow same-sex civil marriage (Massachusetts, Connecticut, Maryland and others) already have the option to bless same-sex marriages but there is no formal churchwide liturgy. Same-sex commitment ceremonies are permitted elsewhere in the church at the discretion of the local bishop.

From the church's Office of Public Affairs:

The report’s theological reflection notes that the SCLM [Standing Commission on Liturgy and Music] has reviewed more than 30 years of General Convention’s deliberation on same-gender couples, especially [a] resolution approved in 2000, that identified characteristics the Church expects of couples living in marriage and other lifelong committed relationships: “fidelity, monogamy, mutual affection and respect, careful, honest communication, and the holy love which enables those in such relationships to see in each other the image of God.”

“Such covenantal relationships can reflect God‘s own gracious covenant with us in Christ, manifest the fruits of the Spirit in holiness of life, and model for the whole community the love of neighbor in the practice of forgiveness and reconciliation,”  the report states.

The drafts will now be studied by bishops and lay/clergy delegates ahead of the church's General Convention this summer. The General Convention in Indianapolis won't be asked to formally approve them, and it looks like formal approval wouldn't come until 2015, 2018 or even 2012, depending on whatever timeline the General Convention approves. Either way, the formal liturgies are not likely to be included in the Book of Common Prayer unless and until Episcopalians opt to formally revise it.

The draft rites are here, and the part that everyone's curious about (from the traditional “I know pronounce you man and wife”) looks like this:

“Inasmuch as N. and N. have exchanged vows of love and fidelity in the presence of God and the Church, I now pronounce that they are bound to one another in a holy covenant, as long as they both shall live. Amen.”

In the name of God, I, N., give myself to you, N. I will support and care for you: enduring all things, bearing all things. I will hold and cherish you: in times of plenty, in times of want. I will honor and keep you: forsaking all others, as long as we both shall live. This is my solemn vow.

Signs of the Times
At USCCB meeting, American bishops ignore real problems while debating minutiae
Follow us on Facebook!
Submit your photos to RNS