CLEVELAND (RNS) Bishop Richard Lennon on Wednesday (March 14) received the official Vatican decrees that overturn his closings of 13 Catholic parishes, the diocese said, kicking off a 60-day period for him to decide whether to appeal. 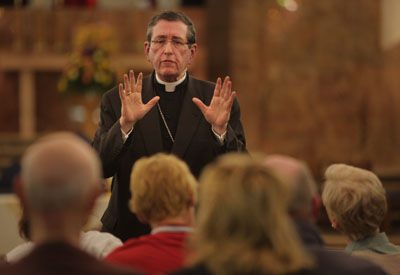 Bishop Richard Lennon of Cleveland implored a group of protesters to vacate the closed St. John the Baptist Church in Akron during the church’s final Mass in 2010.

“The process to review these rulings will now be undertaken with my advisers,” the bishop wrote in a three-sentence statement posted on the Catholic Diocese of Cleveland’s website.

The 13 churches — out of 50 closed between 2009 and 2010 in a diocesewide downsizing — had appealed to the Vatican’s Congregation for the Clergy, arguing they were self-sustaining communities that shouldn’t be closed.

On March 7, word got out that the Vatican ruled in favor of all 13 parishes, saying Lennon did not follow church law and procedures when he shuttered them.

The rulings, released by Boston activist Peter Borre who has been fighting church closings nationwide, prompted jubilation by parishioners who organized prayer vigils and rallies outside their padlocked sanctuaries.

As the bishop closed churches, the diocese put them on the market. But under canon law, the 13 churches with pending appeals could not be sold, so the diocese secured the sanctuaries and kept their properties maintained.

Borre has said that even if Lennon appeals, the Vatican decrees stand in the meantime, and Lennon cannot deny parishioners access to their mothballed churches.

(Michael O’Malley writes for The Plain Dealer in Cleveland.)

News
Study: Biden still leads among Latino Christian voters, but Trump’s support has grown
News
‘High-Church Pentecostal’ leader J. Delano Ellis dies at 75
Martini Judaism
COVID has led us all into sin
Opinion
What good is faith when your fertility treatments aren’t working?
News
Who is Junipero Serra and why are California protesters toppling statues of this saint?
© Copyright 2020, Religion News Service. All rights reserved. Use of and/or registration on any portion of this site constitutes acceptance of our User Agreement and Privacy Policy, Privacy Statement and Cookie Notice. The material on this site may not be reproduced, distributed, transmitted, cached or otherwise used, except with the prior written permission of Religion News Service.