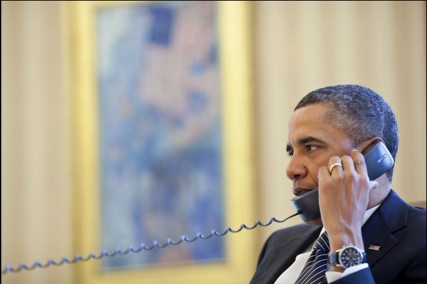 (RNS) The nation’s Catholic bishops have again voiced doubts about the Obama administration’s plans to modify a mandate for employers to provide free birth control coverage, vowing to press a new campaign to rally Americans to defend religious freedom.

Despite their skepticism, a statement issued Wednesday (March 14) by leading bishops at the end of a closed-door meeting in Washington was notable for lacking the “war on religion” rhetoric that has characterized many of the hierarchy’s broadsides against the White House.

While the bishops called the proposal unveiled by President Obama on Feb. 10 “an unspecified and dubious future ‘accommodation,'” they also stressed that they are willing to “accept any invitation to dialogue” with the White House.

The Rev. Thomas Reese, a Jesuit at Georgetown University who follows the inner workings of the hierarchy, described the language as “strong and uncompromising” but not “inflammatory.”

The White House is currently in talks with an array of religious leaders — many of them Catholic officials from hospitals, universities and social service agencies — on how to structure an acceptable compromise.

The linchpin of Obama’s accommodation is to have insurance companies, rather than religious employers, cover the costs of contraception coverage in separate deals with employees that do not involve faith-based organizations.

Tensions over the contraception mandate have escalated divisions between the administration and the Catholic bishops, and led to speculation that the two-day meeting of the USCCB’s Administrative Committee would look for ways to soften the tone.

Wednesday’s statement from 40 or so leading bishops seemed to stay the course while perhaps dialing down the rhetoric a notch.

It also said that apart from trying to restart talks with the White House, the bishops would seek relief through Congress and the courts. Both of those avenues pose significant hurdles, especially since public opinion is not coalescing behind either the bishops’ stand or their attempts to frame the battle as a fight to defend religious liberty.

That may explain why the Administrative Committee statement also highlighted an upcoming new campaign, to be launched with the publication of “A Statement on Religious Liberty,” which will reportedly broaden the scope to include limitations on churches aiding illegal immigrants, Christian groups organizing on campuses, and churches renting space in public schools.

Another clear goal of the Administrative Committee was to project a united front in the church’s campaign against the contraception rule. The bishops have openly criticized other church agencies and publications for praising the White House accommodation and for critiquing the hierarchy’s rationale for its ongoing opposition.

Wednesday’s statement said the bishops are “strongly unified and intensely focused,” and they thank “all who have stood firmly with us in our vigorous opposition to this unjust and illegal mandate.”

Opinion
Amy Coney Barrett’s religion isn’t the problem. It’s her record.
Signs of the Times
How to make our politics better: Pray first, says a Jesuit guide
Signs of the Times
Election checklist: Five ways Catholic parishes can keep politics out of church
News
Study: Biden still leads among Latino Christian voters, but Trump’s support has grown
Martini Judaism
COVID has led us all into sin
© Copyright 2020, Religion News Service. All rights reserved. Use of and/or registration on any portion of this site constitutes acceptance of our User Agreement and Privacy Policy, Privacy Statement and Cookie Notice. The material on this site may not be reproduced, distributed, transmitted, cached or otherwise used, except with the prior written permission of Religion News Service.