WILMINGTON, N.C.(RNS) All this talk of beer was making the former seminarian thirsty.

“Cheers,” said assistant brewer Christopher McGarvey, taking a sip from his pint of golden ale. Then he continued his lecture on the history of beer in ancient Samaria to a crowd of about 90 on the third floor of this city's Front Street Brewery. 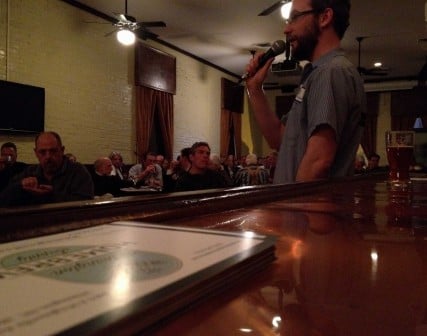 Assistant brewer Christopher McGarvey lectures on the history of beer in ancient Samaria to a crowd of about 90 people at Front Street Brewery in Wilmington, N.C.

McGarvey is a recent seminary graduate, a cantor at St. Basil the Great Orthodox Church and the brains behind the “What Would Jesus Brew” class each Tuesday evening in March.

The class is part of a yearlong Heavenly Homebrew Competition of Churches for Charity. It will culminate in church teams brewing individual beers for a fall event benefiting Lower Cape Fear Hospice & Lifecare Center in Wilmington.

McGarvey said the competition is about learning how to brew beer in the context of how the drink was used historically in the church. All in moderation, of course.

Officials at Hospice said it's the first time any group has held a beer brewing competition as a benefit for them, and the charity is grateful for the donations.

Church teams have witty names such as “The Hopostles” and “Brew Unto Others,” said Jeffrey Hughes, a team leader for St. Paul's Episcopal Church. McGarvey picked clever scriptural references for the title of each class such as “Treasure Hidden in a Field: Barley, Hops and Brewing Basics” or “In the Beginning Was the Wort: How to Start Brewing in Your Kitchen.”

Teaching about the importance of grain to early beer makers, McGarvey said, “It became clear early on that God gave us barley to make beer with.”

Though competition organizers extended the invitation to a wide variety of denominations, you won't find any local Baptists or Methodists — many of who abstain from alcohol. The 10 church teams so far are Catholic, Orthodox, Episcopal, Lutheran or Unitarian.

“It's like a joke I once heard about when some western parts of the state were voting on liquor by the drink,” Elliott said. “A man says to this woman: 'Well, you know Jesus turned water into wine.' And she said, 'Yes, and I've always thought the less of him for it.' We believe that all God's gifts are good in their proper place and used properly.”

The brewery is marketing the class as teaching participants how to “brew great beer and raise money for Hospice, while embodying a historical Christian attitude towards the moderate use of alcohol as a blessing from God.”

McGarvey quoted St. Boniface telling villagers to drink beer instead of water for hygiene reasons in sixth-century Germany, “which might be shocking if someone in the clergy started saying that today.”

From a pastoral perspective, Elliott's one critique was the timing of the class — smack in the middle of Lent.

“It seemed a little odd to me because Lent is supposed to be a lean time,” he said. “You're learning about brewing of the beer and Christian history. They say you should take something on for Lent, but we are in a fairly fatty and rich environment while we're learning about it.”

After a pause, he added: “I guess we're taking on beer for Lent.”

News
A $100 million ad campaign wants to fix Jesus’ image. His followers remain a problem.
Follow us on Facebook!
Submit your photos to RNS