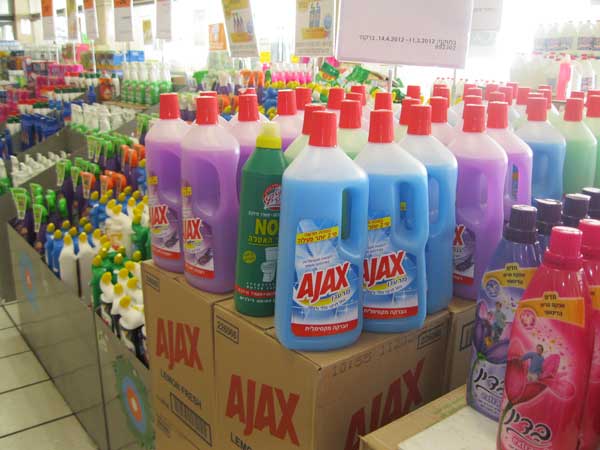 JERUSALEM (RNS) During the month leading up to Passover, which this year begins April 6 at sundown, Chevy Weiss, an ultra-Orthodox Jewish mother with five kids and a demanding career, scrubs and vacuums almost everything in her Baltimore home.

In keeping with their strict interpretation of Jewish law, which forbids Jews from possessing and consuming chametz (fermented grains) during the eight-day festival, Weiss and her husband, Yoel, clean every one of their five children's toys by hand, with bleach. 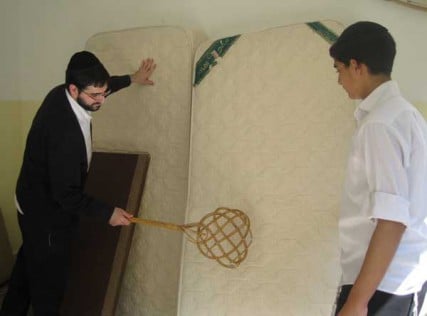 Two Orthodox Jewish Jerusalemites clean their mattresses ahead of the Passover holiday.

While some families clean items in a washing machine, "we wash every piece of Lego individually, like my mother did," said Weiss, a 39-year-old political consultant. "We vacuum every single pocket on every jacket. And we spend significant time with toothpicks getting into cracks of tables and chairs that have been around food."

Like other Orthodox families, the Weiss's also purchase chametz-free toiletries, makeup and cleaning supplies for use during the holiday.

"I know that people have mocked our traditions to buy kosher-for-Passover tin pans, disposable plates and toilet paper, but it's not going to the extreme. Often, these things are made of chametz products."

Even so, Weiss has a red line:  "I don't start washing the curtain rods high up on the walls like some may do, because I know chametz isn't going to be there," she said.

While Passover cleaning of one form or another has been around since the Israelites fled from bondage in Egypt -- Passover's central theme -- some say the lengths to which many contemporary Jewish families go to avoid chametz has turned the "festival of freedom" into a season of domestic slavery.

"There are important laws related to not eating chametz on Passover, but some people go overboard and do things that aren't required by Jewish law," said Rabbi Jay Karzen, a modern-Orthodox rabbi in Jerusalem. "They clean their chandeliers and change their sink faucets" out of fear a cookie or breadcrumb may have touched them.

In Israel, some Haredi, or ultra-Orthodox, rabbis have instructed adherents to drink only bottled mineral water on Passover because people have been known to throw bread into the Sea of Galilee, Israel's main source of drinking water.

Within the global Jewish community, where Passover is an almost universally celebrated holiday even among secular Jews, people poke good-natured fun at the cleaning mania.

Karzen recounted a joke in which a family's toilet dies just before Passover.

"Their plumber tells them to buy a new toilet and that he'll install it during the intermediate days of the holiday. On their way back from the store, a neighbor sees them hauling the toilet and tells her husband, 'Next year, we should change our toilets for Passover.'"

Growing serious, Karzen cautioned, "being this 'machmir' (strict) can destroy the joy of the holiday.  It can be especially hard on the women."

Well aware of the problem, over the past few years several well-known Orthodox rabbis in Israel and the U.S. have admonished families not to confuse spring cleaning with Passover cleaning.

Even so, "Passover remains one of the most oppressive holidays for women," according to Elana Sztokman, a Jerusalem-based feminist and author of "The Men's Section: Orthodox Jewish Men in an Egalitarian World." 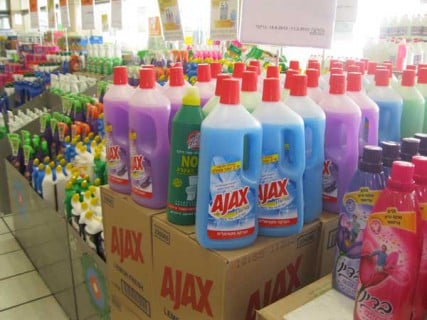 Weeks before the start of Passover, supermarkets all across Israel set up massive displays of cleaning materials.

"There are all kinds of expectations on women to be super cleaners, super cooks and free for an entire month to do nothing but clean. As much as you'll hear rabbis say, 'You don't have to work that hard,' the reality is that Orthodoxy as a culture depends on the servitude of women."

Sztokman said the growing trend toward stringency in all areas of Orthodox Jewish life, which is reflected in ever-more modest attire and stricter dietary observance, has been seeping into Passover observance as well.

Which is not to say that less religious and secular Jews, especially in Israel, aren't fazed by Passover preparations.

In Israel -- where cleaning materials are stacked high at every supermarket entrance a month before the Seder meal; where the national fleet of planes is scrubbed; and where huge cauldrons of boiling hot water are set up on street corners to cleanse cutlery and pots -- everyone seems to be caught up in the frenzy.

During the many years he lived in Israel, Joe Millis, who now lives in London, recalled how, "just before Pesach (Passover) I'd be in line at the car wash with several other secular Israelis" in order to rid the upholstery of crumbs.

"It was madness. I rationalized it as a spring clean, but I could have done that another time."

While many Jews dread Passover preparations, and a sizeable number largely avoid them by going away for the festival, Weiss said she eagerly awaits the holiday ever year.

"I enjoy being as stringent as possible and upholding the customs and traditions of my ancestors," Weiss said.