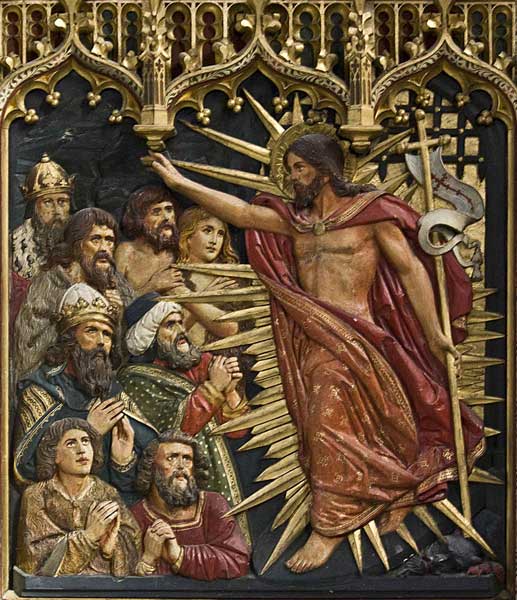 (RNS) Every Christian knows the story: Jesus was crucified on Good Friday and rose from the dead on Easter Sunday. But what did he do on Saturday?

That question has spurred centuries of debate, perplexed theologians as learned as St. Augustine and prodded some Protestants to advocate editing the Apostles' Creed, one of Christianity's oldest confessions of faith.

Roman Catholic, Eastern Orthodox and most mainline Protestant churches teach that Jesus descended to the realm of the dead on Holy Saturday to save righteous souls, such as the Hebrew patriarchs, who died before his crucifixion.

The Catechism of the Catholic Church calls the descent “the last phase of Jesus’ messianic mission,’’ during which he “opened heaven’s gates for the just who had gone before him.”

An ancient homily included in the Catholic readings for Holy Saturday says a “great silence” stilled the earth while Jesus searched for Adam, “our first father, as for a lost sheep.”

Often called “the harrowing of hell,” the dramatic image of Jesus breaking down the doors of Hades has proved almost irresistible to artists, from the painter Hieronymus Bosch to the poet Dante to countless Eastern Orthodox iconographers.

But some Protestants say there is scant scriptural evidence for the hellish detour, and that Jesus’ own words contradict it.

On Good Friday, Jesus told the Good Thief crucified alongside him that “today you will be with me in paradise,” according to Luke’s Gospel. “That’s the only clue we have as to what Jesus was doing between death and resurrection,” John Piper, a prominent evangelical author and pastor from Minnesota, has said. “I don’t think the thief went to hell and that hell is called paradise.” 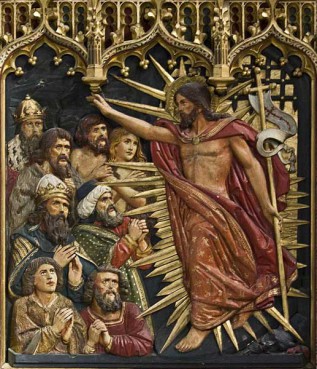 An altar reredos at All Souls College Chapel in Oxford, England, depicts Jesus freeing the Jewish Patriarchs in hell.

First-century Jews generally believed that all souls went to a dreary and silent underworld called Sheol after death. To emphasize that Jesus had truly died, and his resurrection was no trick of the tomb, the apostles likely would have insisted that he, too, had sojourned in Sheol, said Robert Krieg, a theology professor at the University of Notre Dame.

“It helps bring home the point that Jesus’ resurrection was not a resuscitation,” Krieg said.

Belief in the descent was widespread in the early church, said Martin Connell, a theology professor at the College of Saint Benedict/St. John's University in Minnesota. But the Bible divulges little about the interlude between Jesus’ death and resurrection. Churches that teach he descended to the realm of the dead most often cite 1 Peter 3:18-20.

"Christ was put to death as a human, but made alive by the Spirit,” Peter writes. “And it was by the Spirit that he went to preach to the spirits in prison.”  The incarcerated souls, Peter cryptically adds, were those who were “disobedient” during the time of Noah, the ark-maker.

Augustine, one of the chief architects of Christian theology, argued that Peter’s passage is more allegory than history. That is, Jesus spoke “in spirit” through Noah to the Hebrews, not directly to them in hell. But even Augustine said the question of whom, exactly, Jesus preached to after his death, “disturbs me profoundly.”

The descent might not have become doctrine if not for a fourth century bishop named Rufinus, who added that Jesus went “ad inferna” - to hell - in his commentary on the Apostles' Creed. The phrase stuck, and was officially added to the influential creed centuries later.

But changing conceptions of hell only complicated the questions. As layers of limbo and purgatory were added to the afterlife, theologians like Thomas Aquinas labored to understand which realm Jesus visited, and whom he saved.

Other Christian thinkers such as Martin Luther and John Calvin disagreed on whether Christ suffered in hell to fully atone for human sinfulness. That question, raised most recently by the late Swiss theologian Hans ur von Balthasar, stirred a fierce theological donnybrook in the Catholic journal First Things several years ago.

Wayne Grudem, a former president of the Evangelical Theological Society, says the confusion and arguments could be ended "once and for all" by excising the line about the descent from the Apostles' Creed.

“The single argument in its favor seems to be that it has been around so long,” Grudem, a professor at Phoenix Seminary in Arizona, writes in his “Systematic Theology,” a popular textbook in evangelical colleges. “But an old mistake is still a mistake."

Grudem, like Piper, has said that he skips the phrase about Jesus’ descent when reciting the Apostles’ Creed.

But the harrowing of hell remains a central tenet of Eastern Orthodox Christians, who place an icon depicting the descent at the front of their churches as Saturday night becomes Easter Sunday. It remains there, venerated and often kissed, for 40 days.

“The icon that represents Easter for us is not the empty cross or tomb," said Peter Bouteneff, a theology professor at St. Vladimir’s Orthodox Theological Seminary in Crestwood, N.Y. “It’s Christ’s descent into Hades.”