But for one Texas-based Christian ministry, Cameron's film still delivers a decidedly un-Christian message: That “class warfare” aboard the doomed ocean liner resulted in the disproportionate deaths of poor, female and young passengers, thus sinking the “Christian doctrine” of “women and children first.” (1912) Frank Goldsmith, his wife Emily, and their two sons, Frank Jr. and baby Bertie, who died in 1911. Frank, Emily and young Frankie were passengers on board the Titanic when it sank in 1912. Emily and Frankie survived, but Frank Sr. did not.

That's why Vision Forum Ministries in San Antonio and the Christian Boys' and Men's Titanic Society are sponsoring “Titanic 100: An International Centennial Event” in the resort town of Branson, Mo., which is also home to a Titanic museum.

Using drama, music and interactive events, including an “Edwardian Ladies Tea,” the group aims to “set the record straight” by disproving Cameron's portrayal of the ship's demise, and to showcase “the legacy of heroism” aboard the Titanic, “as men and boys on board the ship gave their lives so women and children might live.”

On the group's website, Vision Forum Ministries argues that as the ship foundered, the “Darwinian notion of survival of the fittest was rejected in favor of the age-old Christian doctrine that the 'strong sacrifice for the weak.'”

“The Christian doctrine of 'women and children first' was firmly upheld.”

Doug Phillips, president of Vision Forum, founded the Christian Boys' and Men's Titanic Society the same year as Cameron's original film, and each year, the society hosts a gathering on the anniversary of the disaster to commemorate the legacy of “male chivalry” demonstrated while the ship sank.

Cameron's film, which won 11 Academy Awards, including Best Picture, advances “a false image of Marxist class-warfare,” the ministry claims, “with the rich seeking to bribe their way to freedom, the poor deliberately prevented from reaching safety, and the nobility of Christian sacrifice minimized and ridiculed. … Such depictions are historical nonsense.”

The ministry cites Lee Merideth, author of “1912 Facts About Titanic,” saying that of the 706 survivors of the disaster, almost as many Third Class passengers survived (174) as did First Class (202) and crew (212). “Other than 'women and children first,' there wasn't any attempt to save one class of passengers over another,” the ministry argues. 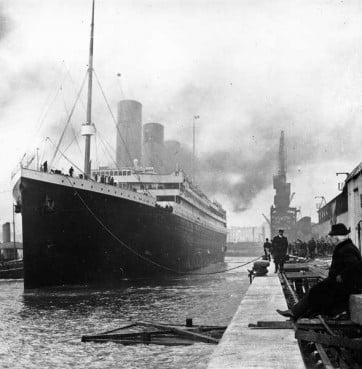 The Titanic at the docks of Southampton in April 1912.

The Titanic Historical Society in Indian Orchard, Mass., which bills itself as the world's largest such group, offers a more nuanced view.

Far fewer men did survive than women. The official inquiry into the sinking noted that the overall survival rate for men was 20 percent; for women, 74 percent and for children, 52 percent.

News
Dying ‘the Buddhist way’ gains in hospice centers in the West
Follow us on Facebook!
Submit your photos to RNS