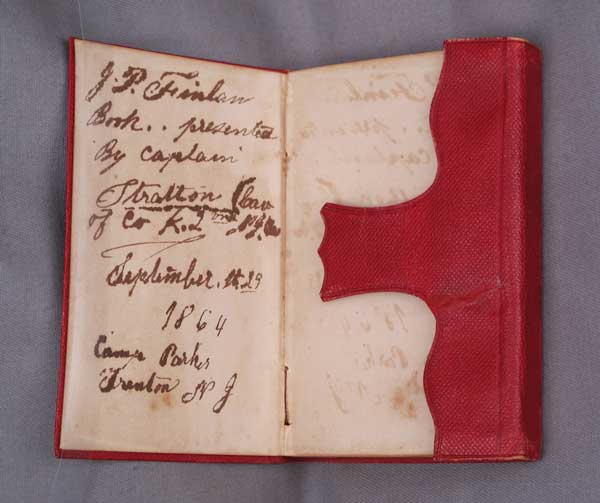 NEW YORK (RNS) The simplicity of the exhibit - copies of the Bible resting in glass cases - can be deceptive.

But the Museum of Biblical Art's exhibition, "Finding Comfort in Difficult Times: A Selection of Soldiers' Bibles," is American religious history come alive.

The exhibit showcases three dozen copies of Scriptures published for members of the U.S. Armed Forces from the Civil War onward, from leather-bound, 19th-century copies to contemporary Bibles clothed in camouflage.

But more than the Bibles themselves -- on long-term loan from the American Bible Society -- the exhibit tells the stories of the men and women who read them, their struggles with hardship, and the place of religion in their lives.

Given the personal histories they contain, "every scripture in the Rare Bible Collection at MOBIA has its own unique story," said the New York museum's executive director, Ena Heller.

Efforts to supply Bibles to American troops began in the waning years of the American Revolution. Decades later, in 1817, the one-year-old American Bible Society began supplying Bibles to the crew of the frigate USS John Adams.

Eventually, the society became the most prominent, though not the sole, distributor of Bibles to members of the U.S. military. While most of the Bibles have been intended for Protestants, Catholic versions, as well as Jewish Scriptures, have also been provided.

An early challenge was distributing Bibles during the Civil War. The New York-based American Bible Society opted to supply Bibles to both sides of the conflict, but distributing them to Confederate troops proved daunting. Some were intercepted as contraband by Union forces.

During World War I, General John J. Pershing and President Woodrow Wilson penned messages that accompanied a 1917 copy of the New Testament. In his preface, Wilson, a Presbyterian elder, declared that "the Bible is the word of life" and urged soldiers to read the Scriptures and "find this out for yourselves." 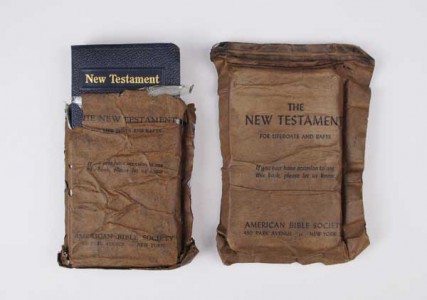 The New Testament for lifeboats and rafts - 1942.

"When you have read the Bible you will know that it is the word of God, because you will have found the key to your own heart, your own happiness and your own duty," Wilson wrote.

Some of the Civil War-era Bibles were found in the pockets or knapsacks of fallen soldiers, who often believed that a Bible carried in a vest pocket could stop bullets, the exhibit notes.

"The penetration power of Civil War muskets, limited as it was, lends a modicum of credibility to this idea," wrote museum curator Liana Lupas in a book that accompanies the exhibition. "World War II bullets, however, could not be stopped so easily."

Perhaps the most revealing comments come from the inscriptions and marks contained in the exhibited Bibles. Some hint of private mysteries and epiphanies: "Given to a soldier and thrown away by him; picked after by another soldier and the means of his conversion," reads one inscription.

A Bible from World War I tells another tale. Chamberlain Bounds, a Marine from Abilene, Texas, carried a copy of the New Testament as he fought in the fields of Flanders.

He met a young woman and inscribed a card to her -- the card remained in the Bible that Bounds' family donated to the American Bible Society.

"Dear Jane," Bounds wrote. "No friend will miss you more than I will and none grieve more at thy departure. In parting I give you this little soiled Testament which has been my greatest strength and comfort. Friends may fail you here, loved ones may depart and we seem sorely pressed, but in this book we find a friend who cannot fail and gives Life Eternal." 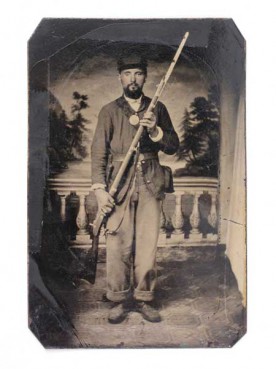 Whatever the individual stories, circumstances and mysteries, the exhibited Bibles also point to a shared, collective history: "The hope, the fear, the regrets, the pain of the soldiers who owned them and used them in what would have been some of the most difficult moments of their lives," said Heller.

"It's about the personal involvement and the role that the Bibles played in ordinary, yet also extraordinary, people's lives."

"Throughout the centuries the Bible has been a source of guidance and comfort for those who experience the tragedy, trauma and horror of war," he said. "Its importance can't be overestimated."

The museum's exhibition continues through May 20.