(RNS) United Methodists twice rejected measures on Wednesday (May 2) that called for the denomination to divest from companies accused of contributing to the Israeli occupation of Palestinian territories. 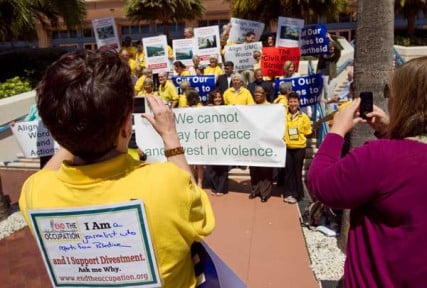 Members of the United Methodist Kairos Response gather for a group photo on the steps of the Tampa (Fla.) Convention Center, site of the 2012 United Methodist General Conference. The group is calling on The United Methodist Church to divest from companies that profit from the Israeli occupation of Palestinian territories.

Neither vote was particularly close, with about two-thirds of the 1,000 delegates gathered in Tampa, Fla., through May 4 rejecting the calls for divestment.

The UMC rejected similar measures at its last General Conference in 2008.

Don House, a lay delegate from Texas, warned the UMC against setting an unwelcome precedent. "We'd be targeting the companies that make the products, instead of the people who use the products," he argued on Wednesday.

This year, high-profile activists, such as Anglican Archbishop Desmond Tutu, had lobbied in favor of divestment.

But many American Jews had strongly opposed the divestment resolutions, calling them unfair and politically naive. 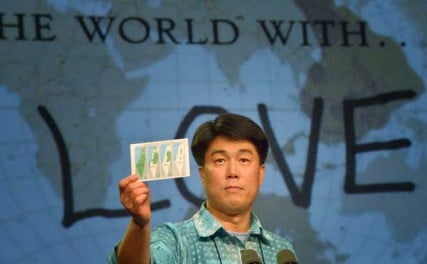 The Rev. We Hyun Chang, a pastor in Belmont, Mass., and a delegate from the New England annual conference, holds a map of Israeli encroachment of the West Bank as he presents a minority report during the May 2 session of the 2012 United Methodist General Conference in Tampa, Florida. Chang presented a motion favoring divestment from corporations profiting from the illegal Israeli settlement of occupied Palestinian territories. The move was defeated.

“A one-sided approach damages the relationship between Jews and Christians that has been nurtured for decades,” about 1,200 North American rabbis wrote in an open letter. “It promotes a lopsided assessment of the causes of and solutions to the conflict, disregarding the complex history and geopolitics. Furthermore, it shamefully paints Israel as a pariah nation, solely responsible for frustrating peace.”

One of the rejected resolutions called out heavy machinery manufacturer Caterpillar Inc., Motorola Solutions and Hewlett-Packard, which have been accused of contributing to, and even profiting from, the destruction of Palestinian homes and construction of Israel settlements.

Earlier on Wednesday, UMC delegates did approve, by a vote of 60-40, a resolution voicing opposition to Israeli settlements in the Palestinian territories.