SALT LAKE CITY (RNS) If you suspected the newly released U.S. Religion Census overstated the Mormons' growth rate, you were right. That’s because, this time around, the Utah-based Church of Jesus Christ of Latter-day Saints changed the way it reported its membership to the researchers. The Salt Lake Temple, also known as the Mormon Temple, worship site of the Church of Christ of Latter-Day Saints in Salt Lake City, Utah.

The once-a-decade study was assembled by the Association of Statisticians of American Religious Bodies, which included self-reported data on adherents for 153 participating bodies.

Its report pegged U.S. Mormon growth at 45.5 percent, jumping from 4.2 million in 2000 to 6.1 million in 2010. The 2000 figure, however, was much lower than the 5.2 million listed in the LDS church’s own almanac for that year. If researchers had been given that figure, the percentage of growth would have been considerably smaller, closer to 18 percent.

Here’s how the LDS church explains the discrepancy between the 2000 Religion Census figure and its own almanac for the same year.

“Total (LDS) Church membership numbers are derived from those individuals who have been baptized or born into The Church of Jesus Christ of Latter-day Saints,” spokesman Scott Trotter said Wednesday (May 2). “They are neither projections nor estimates.”

Trotter acknowledged that, in past years, LDS membership figures reported to the census researchers “were understated.”

For those years, he said, the LDS church “left out numbers of members who, although baptized, were not currently associated with a specific congregation. This year, we included total membership numbers to more accurately reflect all of those found on church records.”

Dale Jones, a researcher on the Religion Census, said he wished the LDS church had alerted him about the change in its reporting methods. But Jones, director of research services at the Church of the Nazarene Global Ministry Center in Kansas, said he had no problem with the shift.

“Any group can define (its membership) however they like,” Jones said. “Mormons are not the only ones to change, and it's not a big deal.”

If the LDS growth rate slipped from 45 percent to, say, 20 percent, it would still put the Mormons “at the top of the list” among Christian faiths, he said. “I don’t care if it’s half as much. It’s not the same story, but it’s still a great story.”

In fact, Jones said, reporting the LDS church’s entire membership list “is closer to what most Protestants do.” 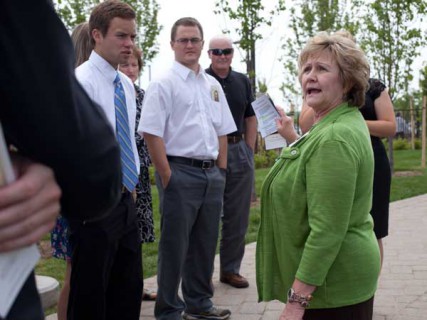 Host Patsy Gerly introduces the new Kansas City, Missouri Mormon temple to a group of visitors just before entering the temple on Saturday, April 28, 2012. Following its formal dedication on Sunday, May 6, the temple will serve some 45,000 Latter-day Saints in 126 congregations throughout Kansas, Missouri and small portions of Oklahoma and Arkansas.

In his own Nazarene faith, officials “have an inactive members list as well, and we do include them in our total membership,” he said. “In that sense, this move actually strengthens our case for saying our data is pretty comparable across denominations.”

The LDS church does not remove any name from the list unless the person is excommunicated, asks to be removed or is dead. That means that a large number of members remain on the rolls who no longer attend or even consider themselves to be Mormon.

“We estimate that only 40 percent of LDS church members in the U.S. attend church regularly,” said Matt Martinich, an independent researcher who studies Mormon demographics for cumorah.com. “That number varies by region — some areas have very high attendance like 70 percent and some as low as 20 percent.”

Martinich gets that activity rate by comparing the ratio of members to congregations, LDS seminary and institute enrollment, and member and missionary reports. 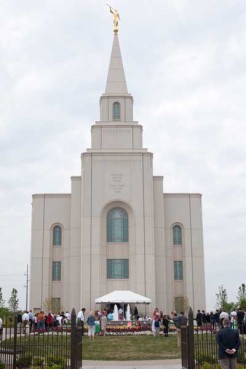 The Kansas City, Missouri Mormon temple welcomed visitors during their open house on April 28, 2012 before being formally dedicated on Sunday, May 6. The temple will serve some 45,000 Latter-day Saints in 126 congregations throughout Kansas, Missouri and small portions of Oklahoma and Arkansas.

Unlike other studies, which track beliefs and attendance, the Religion Census attempts to count the actual number of people affiliated with U.S. congregations. For instance, it listed Utah’s Catholic population at 160,125. But Catholics, who make up by far the state’s second-largest religion after the predominant Mormon faith, say the real figure is closer to 300,000.