(RNS) Archbishop Michael Seneco, of Washington, D.C., is a gay man who plans to marry his longtime partner in September. 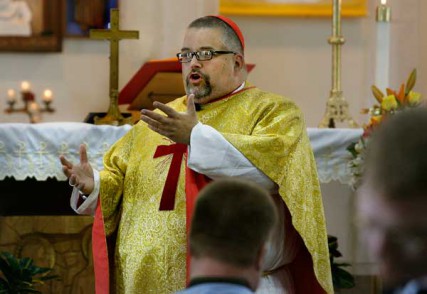 Bishop Jim Morgan, of Ogden, Utah, is also gay and has been with the man he considers his husband for 30 years.

In this church, the bishops’ marital relations haven’t caused a ripple among the clergy or the laity. No protests. No outraged believers. No furious voting.

Both priests are leaders of the North American Old Catholic Church, a little-known brand of Catholicism, with elements most Catholics wouldn’t recognize. According to its website, it preaches openness, tolerance and interfaith dialogue as “an essential way to build a more holistic and loving world in accordance with the Gospels.”

North American Old Catholics, members say, “are redefining what it means to be a universal catholic church in a modern world needing prophetic voices.”

In this incarnation of Catholicism, priests and nuns may marry whomever they wish, every baptized person (including divorced members) is welcome to take Communion and women can be priests. Their faith statements read like a litany of progressive concerns — the environment, anti-torture, gay rights, women’s rights, nuclear disarmament, reproductive rights.

The Old Catholics oppose abortion but don’t believe their view should be codified in civil law. And there is no allegiance to Rome. Indeed, the movement started with the question of papal infallibility.

During the First Vatican Council, convened in Rome between 1869 and 1870, bishops huddled to hammer out the role of the papacy. Some argued against elevating the pope to such a centrally important stature, believing the church should continue its longtime tradition of allowing regional bishops to be somewhat autonomous.

“It was really a question of how the church governed itself,” said Seneco, who is planning the church’s August synod in Ogden. “Before that, local bishops had much more control. After, it was reconcentrated in a monarchical papacy.”

Bishops from Germany and Holland broke away, he says, to form Old Catholic churches. They held five joint meetings between 1871 and 1880 and started to modernize. They allowed priests to celebrate some of the Mass in their native tongues, and they became close to other faiths such as Anglicanism (the Church of England).

In 1902, Old Catholics sent a priest to Milwaukee to launch the U.S. branch of the church. This priest wanted to be ordained a bishop as a way to lead the disparate branches, but his European leaders wouldn’t do it. So he went to India to get the ordination.

The church in the United States had some small congregations, but they became fragmented. Some stayed with the Old Catholics, while others joined a group known as Independent Catholics.

It remained like that for a hundred years or so. Then came the Internet, which allowed these Old Catholics to find one another, be invigorated by the association and create a national organization.

In 2007, Seneco and two other bishops met for the first time to flesh out the structure. Three years later, seven bishops elected Seneco to head the new denomination. It now has 8,000 to 10,000 members in 21 states, mostly in small congregations. They still celebrate Mass as Catholics did — at least until last year, when the larger church tweaked its English-speaking liturgy.

Seneco says Old Catholics are seekers who didn’t fit in more traditional churches, but longed for the history-rich traditions and liturgy of the Catholicism they had left.

“It’s a rich tradition,” he said. “And there are more similarities between us and the institutional church than what separates us.”

The Catholic Diocese of Salt Lake City had no comment on these Old Catholics, but University of Utah religious-studies scholar Colleen McDannell understands why this group would want to be associated with the largest branch of Christianity, rather than become another Protestant sect.

“The Catholic Church is appealing, not only because of its strong sense of authority and centralized leadership,” says McDannell, author of “The Spirit of Vatican II: A History of Catholic Reform in America,” “but also because of its long, rich and complicated history and its elaborate and beautiful liturgy.”

Many Catholics today are disgruntled about certain aspects of their church, she said, but they don’t want to give up that liturgical tradition. Such ritualized worship unites people, McDannell said, while allowing them to think whatever they want.

Even as a young Catholic growing up in New Haven, Conn., Seneco, now 46, always wanted to be a priest. But his high school guidance counselor discouraged that vocation, so he became an emergency medical technician instead. Still, the hankering for the church returned.

Finally, in the late 1990s, he found a magazine ad about the Old Catholics and sent away to learn more. He then took an online course, which led him to be ordained a priest in 2001. He became a bishop in 2006 and was elected presiding archbishop four years later.

As the church’s presiding bishop, Seneco oversees priestly vocations, the development of personal ministries and the implementation of directives from the executive committee and synod. He also has an extensive wedding registry, having officiated at more than 500 Old Catholic weddings.

Morgan, 67, also had priestly ambitions from his youth.

He enrolled at a Catholic high school in Texas, which was known as a “minor seminary.” It was the first step toward being a priest. By the time Morgan entered a real seminary, though, he had recognized his sexual orientation and so withdrew from the program.

From 1970 to 1996, he lived in Alaska, doing blue-collar work. He then moved to Utah to take the helm of a local Metropolitan Community Church, which was a haven for Christian gays.

These Old Catholic leaders believe the historic Catholic Church has taken a turn toward the political right, losing its relevance in contemporary American society.

“The Knights of Columbus was founded to help widows and children,” Seneco said. “Now most of their money goes into fighting gay marriage.”

Jesus Christ was about love, he said. “The Bible is a love letter, not an institutional manual.”

Opinion
My child with Down syndrome is not a political statement — and neither is Amy Coney Barrett’s
News
Vatican and China extend ‘experimental’ agreement on appointment of bishops
News
Amy Coney Barrett nomination fight leaves progressive Catholics feeling unseen
News
Pope, in second TED talk, sides with science on climate change: ‘We have few years’
News Analysis
The top three faith moments in the Harris-Pence vice presidential debate
© Copyright 2020, Religion News Service. All rights reserved. Use of and/or registration on any portion of this site constitutes acceptance of our User Agreement and Privacy Policy, Privacy Statement and Cookie Notice. The material on this site may not be reproduced, distributed, transmitted, cached or otherwise used, except with the prior written permission of Religion News Service.