CHICAGO (RNS) Every year, some 100,000 pilgrims trek to the Taize ecumenical community in France where the biggest attraction is the music, a throwback — way, way back, about 1,500 years or so — to repetitive plainchant. 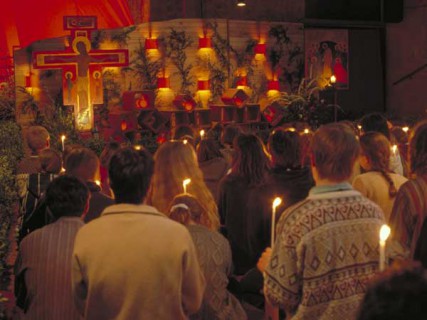 Every year about 100,000 pilgrims trek to the Taize community's headquarters in France, and this weekend the ecumenical group is bringing its message to the U.S. for the first time.

This weekend (May 25-28), for the first time, the Taize brothers will bring their conference to the U.S., where several thousand people — particularly young adults — are expected to meet for prayer and song at DePaul University in Chicago.

Brother Emile, a Catholic and a spokesman for the group, said pilgrims seek out Taize for answers to questions about life in general and faith in particular.

“Young people, I think, feel respected at Taize,” said Brother Emile. “They're welcome to come with their questions and their doubts. And they're very relieved sometimes to feel that there's a place for them as they are.”

Taize (pronounced tie-zay) has long generated attention for its ability to attract followers from both Catholic and Protestant traditions, but now people are asking how the group is so successful in attracting young Christians who, according to surveys, are leaving the church in droves.

Some mainline Protestant leaders who've been exposed to Taize say the movement could help reverse decades of falling membership and attrition. United Methodist Pastor Mark Ulrickson from Southern California likes the way the monks integrate spirituality with action, and he says this would keep young people rooted to church. 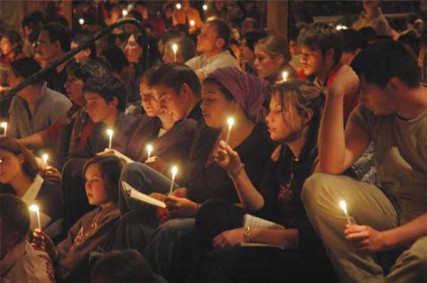 Every year about 100,000 pilgrims trek to the Taize community's headquarters in France, and this weekend the ecumenical group is bringing its message to the U.S. for the first time.

“(Taize) doesn't start with, 'Here's what you have to believe,'” said Ulrickson. “It starts with, 'We're brothers and sisters in this person of Christ and we come together to be in prayer together to discover each other and what gifts we have.'”

Chris Soukup was on the verge of leaving the Episcopal Church as a 19-year-old freshman at South Dakota State University. He had grown tired of years of going to church just because his parents said so. When he was asked to take a job as a counselor at a church camp, he had his reservations, but decided to give it a try.

Soukup was moved by the Taize-style camp that was led by a visiting brother from France. Three weeks of singing simple phrases over and over, extolling God as the light out of darkness, and quiet time to pray and meditate on passages that exemplify living the life of the gospel captivated Soukup's soul.

“It's a really relaxing style of worship that you don't get with a lot of the denominations … where they're focused on more of a sermon style or a praise-and-worship kind of thing,” Soukup said. “The silence is really the biggest thing for me where you just have time to reflect.”

By the end of the three weeks, Soukup realized how much he longed for church. He now goes twice weekly for spiritual nourishment and a strong sense of community, both at home and at school.

The Rev. Rita Powell of St. Paul's Episcopal Church in Vermillion, S.D., who tapped Soukup to become camp counselor, has been to Taize several times, and said the local Taize service attracts more young people than Sunday mornings do.

The part about nudging participants to go to church is what really appeals to Elizabeth Nickerson, a leader of Taize prayer at Chicago's Fourth Presbyterian Church. Taize's international visits are designed to place young adults with host families. The idea is for them to form relationships, and for the host families to take them to church.

“We need for young adults to know there's a place for them in the church,” she said. “They're welcome, and they're needed and their viewpoints are needed to strengthen the church.”