(RNS) When her 91-year-old aunt passed away in 2010, Diane DiResta videotaped the eulogies to create a record of the moving words spoken. She wasn't ready to talk about her aunt at the service, so she used an online tool for publishing audio to record her thoughts, then e-mailed the audio file to close family.

And when a cherished 89-year-old uncle died in Las Vegas in February — and there was no funeral service to follow — the New York City resident again turned to technology.

“Since there was no way for the family to share his life and express their grief together, I created a blog,” she said. “I added pictures, and family members were able to post their memories of him.”

This is Mourning 2.0. Technological advances have dramatically altered how we grieve for and memorialize the dead.

In this new era, the bereaved readily share their sorrow via Facebook comments. They light virtual candles on memorial websites, upload video tributes to YouTube and express sadness through online funeral home guest books. Mourners affix adhesive-backed barcodes or “QR code” chips to tombstones so visitors can pull up photos and videos with a scan of a smartphone.

Those in need of consolation can replay the streaming video of a funeral service to hear a cleric's comforting words. Those who want help remembering a yahrtzeit — the anniversary of death in the Jewish faith — can get e-mail reminders from websites such as ShivaConnect.com.

“It would be naive to assume that technology would leave the 'death sector' unaffected,” says Ari Zoldan, CEO of wireless-products provider Quantum Networks. “Technology has pervaded all aspects of our lives, and the honoring of our dearly departed is no exception.”

At the International Cemetery, Cremation and Funeral Association's convention in Las Vegas in March, high-tech companies mingled with the more expected urn suppliers and casket makers on the exhibition floor. There were firms that created memorial websites and streamed online funeral videos, as well as producers of the QR codes that go on headstones and urns.

The pitch from LifeMarker, one of those QR producers: “Since the beginning of time, the memorial process has changed very little. Until now.”

The new mourning rituals come as society increasingly embraces all things digital. Nearly half of Americans own smartphones, according to the Pew Research Center. One in five owned a tablet in January, up from one in 10 in December. Eight in 10 are on the Internet — and two-thirds of those online users tap into social-media sites.

“People are getting much more comfortable with multimedia,” says Elaine C. Haney, CEO of Tributes.com, an online publisher of local and national obituaries. “It's become simple for people of just about any age to use.”

Many mourners already use Facebook as a gathering place to express their grief, often posting messages on the profile page of the deceased. Some speak directly to the departed, leaving sentiments such as “I miss you,” “Thinking of you” and even, “Happy birthday in heaven.”

While the digital tools may be new, they still soothe age-old emotions, says Therese A. Rando, author of “How to Go on Living When Someone You Love Dies.”

“Throughout history, we've memorialized people we've loved and lost,” she said. “These are not new needs. These are new ways of meeting the old needs.”

On the Web, mourners can find online support groups, participate in “grief recovery” webinars — and take heart that their loved one will not be forgotten when they see new comments on a Facebook page or memorial website.

“This is the best part of the Internet,” Rando said. “It connects people and allows them to recognize that they are not alone.”

Angelo Merendino, 38, lost his wife, Jennifer, in December. He continues to update a Facebook page that documents her battle with breast cancer, which began five months after their 2007 wedding. 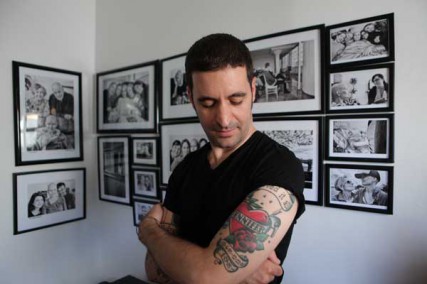 5/11/2012 – New York, N.Y. – Angelo Merendino lost his wife to cancer, and has documented the experience on a Facebook page called My Wife's Fight with Breast Cancer: http://www.mywifesfightwithbreastcancer.com.

It's filled with black-and-white photos he took that show Jennifer in various stages of the disease. In one, she is thin, bald and receiving chemotherapy. In another, she poses with Angelo's father, who is playfully wearing one of her wigs.

“One of the most amazing things to me is how people have responded,” Merendino said. “I'm humbled when I see what someone has written. … People have really been moved by my and Jen's love for each other.”

With each new update, he hopes to keep Jennifer's spirit alive, as well as raise awareness for a cancer-support foundation he is creating in her name.

“These photos are about her fighting, not giving up, and really realizing how precious life is,” he said. “It makes me feel that she is still here and that she's not going to be forgotten.”

Seeing the new mourning trends — and the potential to create new revenue streams — the conservative funeral industry is cautiously entering the digital arena.

“Funeral homes are looking to reinvent themselves in many ways,” said Tributes.com's Haney. “You're hard-pressed to go to a wake anymore where there isn't video tribute on a flat panel, vs. pictures on a bulletin board.”

In addition to providing high-definition screens to play video homages, many funeral homes offer add-ons such as the live-streaming of a funeral for a few hundred dollars, the ability to keep a digital guest book permanently active for $80, and the opportunity to keep a digital candle “lit” on a memorial page for $50.

While the funeral home industry faces falling profit margins — down to an estimated 10.4 percent in 2011 from 11.4 percent in 2006, according to research group IBISWorld — don't expect any overly aggressive leaps into digital services, Haney said.

“This is an industry that is very thoughtful about change and does not change rapidly,” she said. “You always want to be doing the cutting edge, but we have to walk a fine line, so you can't be too cutting edge.”

FuneralOne, a technology company that provides funeral homes with webcasting services, streamed 17,258 funerals last year, up from 768 funerals in 2008.

As technology improves — and more people use digital devices — mourners will be able to tackle once-unconventional tasks such as streaming a funeral by simply using a smartphone or tablet, said funeral industry consultant Robin Heppell.

“We're getting close to the point that if people want to do it themselves, they can just do it with their iPhones,” he said.

There are still those who shun the digital innovations, particularly older clients, said John Reed, a past president of the National Funeral Directors Association who owns two funeral homes in Webster County, W.V.  But many customers also realize that technology can bring people together.

“The new generation has grown up with this type of technology,” he said. “As we move forward, we're going to see more people who want to do this.”

“The older people will die off,” Reed said, “and their values will leave with them.”

News
Funeral directors survive ‘surreal’ year with creativity and faith
Follow us on Facebook!
Submit your photos to RNS