VATICAN CITY (RNS) Pope Benedict XVI’s former butler is facing up to eight years in jail for allegedly stealing confidential documents from the pope’s own desk. But according to a Vatican judge, Paolo Gabriele won’t be serving any time in the world’s smallest state. 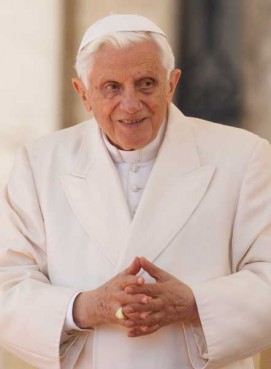 Paolo Papanti Pelletier, a law professor at Rome’s Tor Vergata University who also serves as one of the Vatican court’s judges, told journalists on Tuesday (June 5) that people who are sentenced to a jail term in the Vatican City State are routinely sent to an Italian prison because the Vatican doesn’t have its own jail system.

Paolo Gabriele, who served as Benedict’s “assistente di camera” until his arrest two weeks ago, appeared on Tuesday for a hearing with the Vatican investigating judge, Piero Antonio Bonnet, in the presence of his two lawyers and Nicola Picardi, the Vatican prosecutor.

Bonnet will decide whether Gabriele will have to stand trial or be acquitted.

The pope’s former butler is now in custody in one of the Vatican’s four “safe rooms” — 12 feet by 12 feet rooms with a bed, a desk, a window, a bathroom and a crucifix, Papanti Pelletier said.

Gabriele, he stressed, is treated with the “utmost respect” and, when he attended Mass on Sunday in a “Vatican church,” he was escorted by two Vatican police officers but was not handcuffed.

Gabriele is accused of “aggravated theft,” a crime that carries a prison sentence of one to six years, which could be extended to eight years if more than one “aggravating factor” is found. Additional charges such as “revealing state secrets” may carry maximum sentences of up to five years.

Vatican criminal law, according to Papanti Pelletier, envisions “very mild” sentences: “In Italy, prison sentences are much harsher,” he said.

In the Vatican’s three-tiered court system, if the pope’s butler is to stand trial he will first be judged by the three-man tribunal of which Papanti Pelletier is a member. While the current investigation is secret, the trial would be public, he said.

The tribunal’s sentence can be referred to an appeals court and, ultimately, to a supreme court manned by three cardinals, presided by American Cardinal Raymond L. Burke. This is the only Vatican tribunal that can try other cardinals, should one of the “princes of the church” be found to be involved in the Vatileaks case.

In a TV interview on Monday (June 4), the Vatican secretary of state, Cardinal Tarcisio Bertone, described the leaks as “carefully aimed, and sometimes also ferocious, destructive and organized.”

Pope Benedict XVI has the power to pardon Gabriele at any moment but, according to Papanti Pelletier, it’s expected that he would wait for the trial to be over before deciding how or if to intervene.