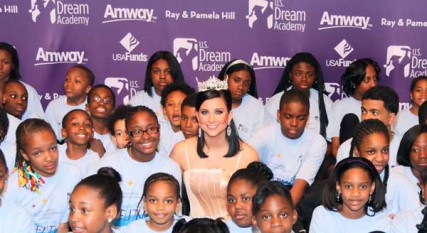 Miss America 2012 Laura Kaeppeler meets with children from the U.S. Dream Academy at their 11th Annual Power of a Dream Gala this year in Washington, D.C.

But the glamorous appearances go for a most unglamorous cause. As someone who saw her father hauled off to prison for a white collar crime, Kaeppeler uses her high-profile platform to shine a spotlight on the 2.7 million, largely unseen kids who have an incarcerated parent.

“I feel like I've been called to do this,” said Kaeppeler, a 24-year-old from Kenosha, Wis. “I believe my life was pre-written and predestined by a higher power before I was born. … What happened in my past is part of that, and (being) Miss America is part of that.”

Kaeppeler's advocacy for these kids comes at a critical juncture. The eight-year, $49 million Mentoring Children of Prisoners program that began under the Bush-era faith-based initiative ended last September when Congress cut the funding. Churches and nonprofit groups still vie to sustain the work, but they're hard-pressed without public funds to recruit, train and support mentors.

Kaeppeler has used her crown to lobby for restored mentoring funding at the White House's Domestic Policy Council. She's also speaking about mentoring and incarceration at some 20 events this year in states from California to Pennsylvania. Attractive and articulate, she always makes the local news, as does her cause.

The platform breaks new ground for the 91-year-old Miss America pageant. These anointed beauty queens have long championed issues from ending homelessness and diabetes awareness, but Kaeppeler is the first to embrace anything related to prisoners. Miss America 2012 Laura Kaeppeler was the keynote speaker at the YMCA Safe Place Services 3rd Annual Together 4 Teens Breakfast yesterday in Louisville, Kentucky. The event was a fundraiser for the Y-NOW Children of Prisoners Mentoring Program. She is pictured with one of the teens.

Kaeppeler's campaign dovetails with efforts to freshen up the Miss America brand beyond a parade of pretty faces and sexy figures into an icon of a modern woman of conviction and influence. Yet even in that context, she faces an uphill challenge to spotlight an issue that she says many would rather ignore.

“I don't think the general public wants to care about someone sitting in prison, let alone their children,” said Kaeppeler, who was raised Roman Catholic and later joined a nondenominational church with her father. “It's an out-of-sight, out-of-mind mentality.”

Among the hurdles: showing that Miss America is still culturally relevant and worth hearing out. The question comes up even in supportive settings. During a recent stop here, red-white-and-blue table settings and balloons welcomed Kaeppeler as keynoter for the Seedling Foundation's mentor appreciation luncheon. Attendees, however, weren't entirely wowed by the star power.

“My first reaction when I heard Miss America would be speaking was, 'Really? They're still doing that?',” said Robin Field, a city employee who mentors an 11-year-old girl with an incarcerated parent.

What's more, these kids and their families generally aren't seeking visibility, either as individuals or as a group. Since kids tend to be embarrassed about having a parent behind bars, they keep that fact hidden and their needs for mentoring often go unrecognized, said Ann Adalist-Estrin, director of the National Resource Center on Children and Families of the Incarcerated in Jenkintown, Pa.

Children of prisoners are already deemed to be at high risk of becoming criminals themselves, are they're drifting even further into society's shadows. Since the government funding ended, dozens of agencies have folded. Those that remain have cut back on mentor recruitment, which exacerbates a chronic problem: not enough mentors, especially men, who are needed to befriend and guide boys on long waiting lists.

Kaeppeler, however, is not discouraged. She's determined to use her 12 months in the spotlight to highlight the hidden toll that the world's highest incarceration rate takes on children. 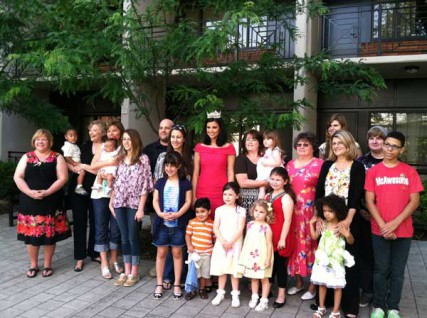 Miss America 2012 Laura Kaeppeler meets with children and their families in Louisville, Kentucky who benefit from Operation Open Arms,a non-profit organization dedicated to providing care for children while their mothers are in prison.

It's hard to know exactly how much impact Kaeppeler is having. Congress has shown no movement toward restoring the funding. But private support for mentoring has increased in some locales, such as Louisville, Ky., where YMCA Safe Place Services reportedly secured more than $250,000 in new pledges soon after Kaeppeler visited.

The goal is to help more kids like Jamal Omar, an 11-year-old from Pittsburgh who lives with his grandmother while his father serves time. His grades and confidence have steadily improved over the four years he's been mentored by 61-year-old Robert Shedrick, who regularly takes Jamal to church.

“When his friends come up to him in church and say hi to me, it seems like he's my dad,” Jamal said. “Or my best friend, maybe.”

Shedrick likens Omar to “wet cement” that can be molded, but only for a while.

“A woman can raise a boy, but there are certain things that only a man can teach him,” said Shedrick, who got matched with Jamal through Amachi Pittsburgh, a faith-based mentoring agency. “That's why I think it's important for Jamal to have me in his life.”

At the Austin luncheon, Kaeppeler made a grand entrance wearing her crystal crown and pink four-inch heels as a chorus of children sang, “Here She Is, Miss America!” But at the podium, glamour gave way to sober reality as she recounted how a family friend had been her lifeline during her father's incarceration. Miss America Laura Kaeppeler smiles for the cameras with mentor Ruben V. Castaneda (left) and his mentee, Riley Chandler, whose father is incarcerated. The photo session was part of her May visit to the Seedling Foundation's annual mentor appreciation luncheon.

“After a dance class, she would do something as small as take me to McDonald's for a 50-cent ice cream cone and sit there in the parking lot and talk,” Kaeppeler said. “Had I not had Katie's guidance, it would have been very easy to go down a negative path and follow a negative crowd of friends.”

Championing this cause for a year means talking about a shameful episode for Kaeppeler's family, one that she once tried to hide behind a pretty smile. But the family agreed it's worth the cost, Kaeppeler said, because God intends for good things to come from it.

“I saw my dad come out of prison as a completely different person from how he'd entered,” Kaeppeler said. “That was when I took a step back and said, 'This happened for a reason. I know there's a greater purpose for it.'”

(This story was supported by the 2011 Knight Grants for Reporting on Religion and American Public Life, a program of the University of Southern California's Knight Program in Media and Religion.) 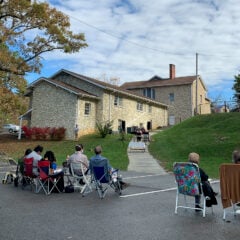