(RNS) As the nation’s Catholic bishops mark 10 years since they adopted sweeping reforms to address the sexual abuse of children by clergy, the 800-pound gorilla in the chancery remains a lack of accountability for the bishops themselves. 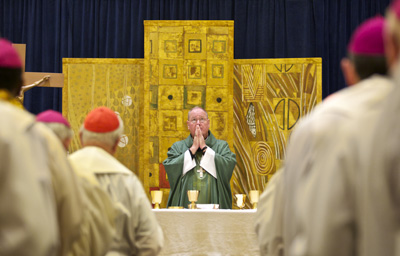 Archbishop Timothy Dolan of New York, president of the U.S. Conference of Catholic Bishops, celebrates Mass for other bishops at their summer meeting in Bellevue, Wash.

That gap also remains the single greatest obstacle to ensuring the safety of children in Catholic parishes and schools and to restoring some measure of credibility for the bishops — and, by extension, the entire Catholic Church in the U.S.

“Bishops should be accountable to their people, to their priests,” Nicholas Cafardi, a canon and civil lawyer who teaches at the Duquesne Law School in Pittsburgh, writes in the current issue of U.S. Catholic magazine.

“But authority without accountability is tyranny,” writes Cafardi, who once headed the bishops’ National Review Board that was established to ensure compliance with their own reforms.

So why was so little done to hold hierarchy accountable even though the calls for penalties were so insistent?

When the bishops gathered under intense public pressure in Dallas in June 2002, they seemed determined to take dramatic steps, and to a degree they did. Their Charter for the Protection of Children and Young People developed a “one-strike” policy to remove priests credibly accused of a single act of abuse, and jump-started efforts to have the Vatican streamline the process for defrocking abusive clerics.

The charter set up the National Review Board and called for similar panels in each diocese. An annual outside audit would also ensure that all bishops were following the charter’s detailed policies on background checks and educating children to recognize the threat of abuse and to report their suspicions.

The bishops even agreed to turn over decades of personnel files to researchers at the John Jay College of Criminal Justice for an unprecedented study into the scope of the abuse in the Catholic Church and why it happened.

Yet after all was said and done in Dallas, the bishops exempted themselves from any real sanctions. That self-absolution was considered outrageous at the time, and the passing years have not eased the anger.

“The Vatican also needs to do its job. It appears to have no problem investigating nuns and theologians, but investigating mismanagement by a bishop is not a priority,” the Rev. Thomas Reese, a well-known Jesuit commentator, told a symposium last month at Jesuit-run Santa Clara University to mark the 10th anniversary of the Dallas charter.

“Even when a bishop is indicted, no one has the sense to tell him to take a leave of absence until the case is over,” Reese said.

Priests themselves also remain upset at the focus on their ranks to the exclusion of their bosses: “In the Dallas Charter, all consequences fall on priests. Nothing is in there for bishops. Diocesan priests are on their own,” one priest said in a recent survey of clergy attitudes.

Even 10 years later, concerns remain that a lack of bishops’ accountability undermines the church’s credibility with the public or, worse, leaves children at risk:

— Several years after the Dallas charter was adopted, Chicago Cardinal Francis George left two priests in ministry despite multiple, credible allegations of abuse against them and recommendations by his review board that the men be removed. Nonetheless, in 2007 George was elected to a three-year term as president of the U.S. Conference of Catholic Bishops.

— Boston’s Cardinal Bernard Law, who was widely seen as the villain of the scandal that erupted in Boston in 2002, was given a plum job in Rome after he resigned in disgrace and he continues to enjoy the perks of a Vatican sinecure.

— Last year, Bishop Robert Finn of the Diocese of Kansas City-St. Joseph, Mo., was charged with failing to report credible allegations that one of his priests had a trove of child pornography and a suspicious interest in young children. Finn is set to go on trial in September and could become the first bishop ever convicted of a crime in connection with the scandal. Even so, he remains a bishop in good standing in the church.

— Bishops in Baker, Ore., and Lincoln, Neb., have refused to allow the annual mandated audits to ensure compliance with the hierarchy’s own policies. Those bishops have not been reprimanded, and last year Pope Benedict XVI promoted the Oregon bishop, Robert Vasa, to a bigger diocese.

— The quality of the diocesan review boards varies widely, and in many cases the recommendations of the board are either ignored or the board is kept in the dark about allegations. That’s what happened in Kansas City and in Philadelphia, where allegations were withheld from the oversight boards.

“If Philadelphia’s bishops had authentically followed their call to live the gospel, they would have acted differently,” Ana Maria Catanzaro, then chair of the Philadelphia archdiocesan review board, wrote after a February 2011 grand jury report detailed allegations against dozens of priests that she and her colleagues had never heard about.

Why haven’t the bishops been able to establish a system for policing themselves?

One is personal: Not surprisingly, the bishops are hesitant to set up a system for punishing their colleagues or even to publicly rebuke them in part because they are a close-knit fraternity. They also know that such a system could one day be used against them.

The principal objection, however, is doctrinal: In Catholic governance and theology, each bishop is answerable only to the bishop of Rome, the pope. No local bishop can take action against another, and the Vatican has in recent years stressed that even the national bishops’ conference has a limited role and cannot usurp any papal prerogatives – such as disciplining bishops.

Benedict has expressed a greater commitment to purifying the church of the “sin” of sexual abuse than his predecessor, John Paul II, but he holds his fellow bishops in such high regard, and is so leery of undermining tradition and authority, that he has taken little action to rebuke those who have been lax on abusers.

At the same time, the pope has moved relatively quickly and decisively to remove not only bishops who are themselves guilty of abuse or possession of child pornography, but also against bishops whose views he considers too liberal.

The contrast between the pope’s swift moves against some bishops and his permissiveness toward others seems to shoot holes in the argument that little can be done to hold bishops accountable when it comes to child abuse cases.

When the bishops gather next week (June 13-15) in Atlanta on the 10th anniversary of the Dallas charter, they will hear a progress report from the National Review Board and recommendations for further action. Some are hopeful that those suggestions might include measures for policing the bishops. But it would still be up to the bishops themselves to give those policies some teeth.