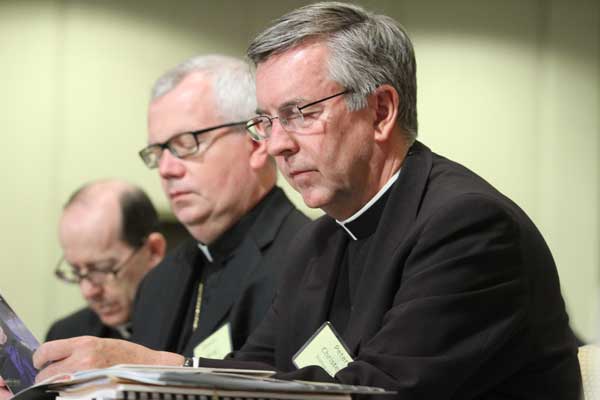 (RNS) The nation’s Catholic bishops, gathered in Atlanta this week for their annual spring meeting, have discussed various issues of great import for the church, from their policies against sexual abuse to their campaign on behalf of religious freedom. But the suggestion on Thursday (June 14) that the hierarchy consider hiring a chief spokesperson for the first time ever prompted the most intense soul-searching so far. The debate reflected a tension between the historic reluctance of individual bishops to cede their own pulpits and the recognition that the bishops have been losing the media war in recent high-profile controversies.

“We need more help and more sophistication in our messaging,” said Boston Cardinal Sean O’Malley. O'Malley strongly endorsed the proposal to hire a chief spokesperson for the U.S. Conference of Catholic Bishops, which is the hierarchy’s Washington-based organizational and public policy arm.

The cardinal noted in particular the public relations “debacle” resulting from the Vatican crackdown on a leadership group of American nuns, Rome’s censoring of another nun’s theological writings, the USCCB’s investigation of the Girl Scouts for alleged ties to Planned Parenthood, and the bishops' fight against the Obama administration’s contraception mandate.

All those things played into the narrative that the church is waging a “war on women” – a meme that clearly leaves many bishops frustrated given the high stakes of the controversies and their desire to improve their public standing after a decade of playing defense in the clergy abuse scandal.

“We need someone who is going to be able to strategize this better for us,” said Bishop William Murphy of the Diocese of Rockville Centre in Long Island, N.Y.

The USCCB has always had a communications department but it has largely focused on putting out press releases for the bishops and organizing promotional campaigns. Sr. Mary Ann Walsh, a nun, is the current director of media relations for the USCCB and has been the best known spokesperson for the bishops.

But neither Walsh nor other officials have been given the kind of authority or platform to speak to the media the way the White House spokesman does, for example – reacting quickly to breaking news or promoting the USCCB’s take on an issue without waiting for clearance from higher-ups. That's becoming a serious problem, said Bishop John Wester of Salt Lake City, head of the bishops’ communications committee.

“We cannot afford to allow critically precious hours or days to slip by without speaking out,” Wester told about 200 of his fellow bishops on Thursday. 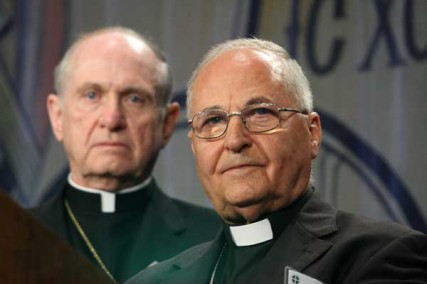 Wester made his suggestion in a presentation that focused on pushing the USCCB to experiment more boldly with social media and other means of spreading news - and the gospel - in a wired world.

“We have to be in on the digital conversations, and we have to listen as well,” Wester said.

But it was his mention of hiring a chief spokesperson – quickly seconded by New York Cardinal Timothy Dolan, president of the USCCB and a media-savvy prelate who is often seen as the hierarchy’s best PR man – that prompted the longest discussion of any topic so far.

While many bishops seemed to back the idea, out of necessity as much as conviction, a few expressed reservations. Long-standing Catholic tradition holds that each bishop speaks for himself and is answerable only to the pope, not a national conference.

“In most organizations our size, these kinds of changes would make half of us redundant within five years,” said Bishop Timothy Doherty of the Diocese of Lafayette, Ind. Hiring a spokesperson, along with ramping up the USCCB’s digital outreach, “is going to change us,” Doherty said.

Archbishop Wilton Gregory of Atlanta seemed to respond to such hesitations by stressing that hiring a spokesperson is critical, but will only work if he or she “will not be shot down” by a bishop who wants to promote his own view.

“The spokesperson has to feel the confidence to make statements that won’t be undermined by one of us,” Gregory cautioned.

If the USCCB does overcome those reservations and hires someone, Dolan would surely have a big say in who it is. And judging by his previous comments on the topic, he would not be a leading candidate for the job.

At a conference in March about the promoting the hierarchy’s agenda, Dolan said that hiring an “attractive, articulate, intelligent” laywoman as the USCCB's anti-abortion advocate was “the best thing we ever did.”

“In the public square, I hate to tell you, the days of fat, balding Irish bishops are over,” Dolan said.