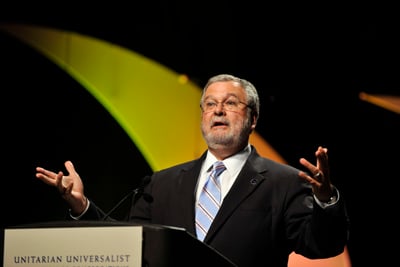 BALTIMORE (RNS) A recent Sunday service at the First Unitarian Church of Baltimore ended with an apology.

Laurel Mendes explained that religious doctrine had been duly scrubbed from the hymns in the congregation's Sunday program.

But Mendes, a neo-pagan lay member who led the service, feared that a reference to God in “Once to Every Soul and Nation” might still upset the humanists in the pews.

“I didn't want to make anyone uncomfortable by reciting something that might be considered a profession of faith,” said Mendes, 52, after the service. “We did say `God,' which you don't often hear in our most politically correct hymns.”

Welcome to a typical Sunday in the anything-but-typical Unitarian Universalist Association, a liberal religious movement with a proud history of welcoming all seekers of truth — as long as it's spelled with a lowercase “t.”

For 50 years the UUA has conducted a virtually unprecedented experiment: advancing a religion without doctrine, hoping that welcoming communities and shared political causes, not creeds, will draw people to their pews.

Leaders say its no-religious-questions-asked style positions the UUA to capitalize on liberalizing trends in American religion.

But as the UUA turns 50 this year, some members argue that a “midlife” identity crisis is hampering outreach and hindering growth. In trying to be all things to everyone, they say, the association risks becoming nothing to anybody.

The UUA was formed in 1961 by the merger of two small, historic groups: Unitarians, who believe in one God, rather than Christianity's traditional Trinity; and Universalists, who hold that God's salvation extends to all, regardless of race, creed or religion.

Nearly 4,000 Unitarian Universalists gathered in Charlotte, N.C., last week (June 22-26) for the association's annual assembly, where they celebrated their golden anniversary with hymns, remembrances and a large cake.

As usual, progressive politics prevailed, with pledges for an “institutional commitment” to ethical eating, an anti-discrimination rally and a special collection taken for ministry to immigrants.

Such activism dates to 19th-century Unitarian godfather William Ellery Channing, who argued that the aim of religious life is to encourage public virtue.

“That sense that religion must be practical and influence the moral and spiritual context in which we live remains absolutely central to Unitarian Universalism today,” said the Rev. John Buehrens, a former president of the UUA.

Like the UUA, one in four Americans sample from a variety of faith traditions, according to a 2009 survey by the Pew Forum on Religion & Public Life. A separate Pew survey found that 65 percent believe multiple religious paths can lead to eternal life.

“There has certainly been an increase in the amount of people who are open to the kind of ideas the Unitarian Universalists have championed,” said John C. Green, a political scientist who worked on the Pew studies and has studied the UUA.

“Whether they can convert that into members joining them is an open question. But the opportunity is certainly there.”

The Rev. Peter Morales, the UUA's current president, calls the current trends, as well as the exodus of Americans from most Christian denominations, “an amazing opportunity.”

“Millions of people are actively seeking a progressive, nondogmatic spiritual community,” he said. “Our challenge is to be the religious community that embraces those people.”

But some say the UUA is held back by members' reluctance to proclaim religious tenets — a tricky task for an association that includes Christians, Buddhists, Jews, pagans, humanists and spiritual refugees from a host of more dogmatic faiths.

Many UUA members say they find meaning and purpose in the familial bonds forged in congregations — regardless of religious beliefs.

The Rev. David Bumbaugh, a professor of ministry at the UUA's Meadville Lombard Theological School in Chicago, was present at the founding of the association in 1961. He says the UUA has always shied away from God-talk for fear of offending members and shattering congregations.

But Bumbaugh has made the rounds recently at regional UUA conferences, encouraging them to publicly wrestle with foundational questions.

“What do we believe? Whom do we serve? To whom or what are we responsible? Those are the questions with which every viable religious movement must wrestle,” Bumbaugh has said.

“So long as those essential questions remain unaddressed, the dream will remain unfulfilled.”

An internal UUA report from 2005 suggested that more than dreams could die. The whole association could go toes up if members continue to muffle religious discussion, the report said.

“The consensus of experts from an array of fields — from organizational development to systematic theology — is that to grow effectively, a religious organization needs clearly defined boundaries,” the report states.

“And one cannot put even the most permeable boundary around nothing.”

The son of a Unitarian Universalist minister, Michael L. Scott said the UUA has stepped — albeit gingerly — in a spiritual direction.

But a lack of defined beliefs has led the UUA to lose 85 percent of its young members, according to several reports, said Scott, an active member of his Unitarian Universalist congregation in Rochester, N.Y.

“Lacking any need to rebel against childhood orthodoxy, they simply drift away; they don't see the point of what we do here,” he said.

Morales had a different experience leading a growing congregation in Golden, Colo.

The Rev. Michael Franch, an affiliate minister at First Unitarian in Baltimore, has his own credo boiled down to three sentences:

“All living things are connected. Your behavior counts. Act on the basis of the first two sentences.”