(RNS) Gay and lesbian Episcopalians are celebrating their church’s approval on Tuesday (July 10) of a liturgical rite for blessing same-sex couples. But conservatives are threatening to take “drastic” steps to distance themselves from the Episcopal Church.

Episcopalians meeting at their triennial General Convention in Indianapolis overwhelmingly approved the new rite. Lay members and priests voted 171-41 in favor of the same-sex blessings. Bishops voted 111-41, with three abstentions.

In doing so, the Episcopal Church joined a small but growing number of religious groups in the U.S. that have sanctioned rites for celebrating same-sex unions. Few, however, are part of international bodies.

Episcopalians, on the other hand, form the U.S. branch of the Anglican Communion, a fellowship with 85 million members worldwide and roots in the Church of England. Anxious to keep the communion intact, Anglican leaders have warned the Episcopal Church against adopting pro-gay policies. Many Anglicans in Africa and other parts of the world consider homosexuality sinful.

On Wednesday, David Brownlie-Marshall, a spokesman for Archbishop of Canterbury Rowan Williams, the spiritual leader of the Anglican Communion, said: “The Archbishop is not planning to release a statement at this stage.” Williams plans to retire at the end of this year. 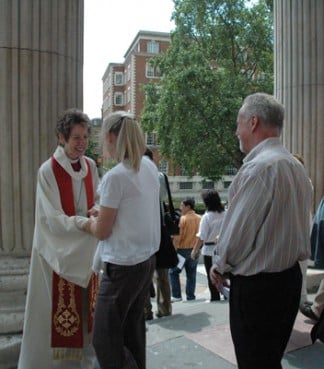 Episcopal Presiding Bishop Katharine Jefferts Schori voted in favor of the same-sex blessings on Monday. A spokeswoman said she was not available for comment.

The Rev. Susan Russell, a longtime gay rights activist in the Episcopal Church, praised the new blessings as a “step towards full inclusion of all the baptized in all the sacraments.” But the senior associate at All Saints Church in Pasadena, Calif., said the work is incomplete.

The same-sex rite resembles a marriage ceremony, with an exchange of vows and rings — but are not, technically, a wedding. Nor are the blessings included in the Book of Common Prayer, the Anglican Communion’s official book of services and rites, which defines marriage as between a man and woman.

Some gay activists have already criticized the new Episcopal rite as “separate and unequal.”

Russell said the blessings, which the resolution passed on Tuesday calls “provisional,” are a way station, not a final stop. “I am quite confident that in three years we will be back and moving toward full marriage equality,” she said.

But will conservative Episcopalians still be around to debate them?

The diocese of South Carolina’s delegation left the General Convention in protest on Wednesday.

“Due to the actions of General Convention, the South Carolina deputation has concluded that we cannot continue with business as usual,” the diocese said in a statement. ”We all agree that we cannot and will not remain on the floor of the House and act as if all is normal.”

On Tuesday, the Rev. Kendall Harmon, the Diocese of South Carolina’s canon theologian, called the approval of same-sex blessings “unbiblical” and “unseemly.”

“By making this decision, the Episcopal Church moves further away from Jesus Christ and his teaching,” said Harmon. “It thereby makes it necessary for the diocese of South Carolina to take further decisive and dramatic action to distance itself from this false step.”

Harmon said South Carolina is not necessarily threatening to secede from the Episcopal Church, as four dioceses have done since the church consecrated a gay bishop in 2003. But his diocese has already begun to move away from the national church, and local Episcopalians will now expect that distance to increase, Harmon said.

Under guidelines approved with the same-sex blessings, bishops do not have to allow them in their diocese. Nor can priests be forced to perform them.

Texas Bishop C. Andrew Doyle said congregations and clergy can make their own decisions, a plan publicly backed by former Secretary of State James A. Baker.

“Hardliners on both sides of the issue may find fault with this proposal,” Baker, an Episcopalian, wrote on the diocese’s website. “But to me, it seems the best way to establish a win-win situation in which there is not one set of winners and one set of losers.”

Bishop Paul Marshall of Bethlehem, Pa., has authorized the blessing of same-sex couples since 2009, when the Episcopal Church lifted a temporary ban.

“On (the) one hand there is for us, then, very little new in action of General Convention today,” Marshall wrote Tuesday on his diocese’s website.

But “there is something very new in the church publicly adopting a single rite for use wherever blessings are celebrated — in a church as liturgically centered as ours, this makes blessing more official, more ritually ‘real,’ theologically substantive,” Marshall said.

The Conservative, Reform and Reconstructionist branches of Judaism also allow gay marriage, as do the Unitarian Universalist Association and some Quaker groups.

The United Church of Christ, which has about 1.5 million members, is the only other mainline Protestant church to sanction gay marriage. Spokeswoman Barbara Powell said the UCC began offering the same liturgical rites for heterosexual and homosexual marriages in 2005.

Earlier this month, the Presbyterian Church (USA) voted down a resolution that would have sanctioned same-sex marriages. Voting on a similar proposal was canceled at the United Methodist Church’s convention in May.