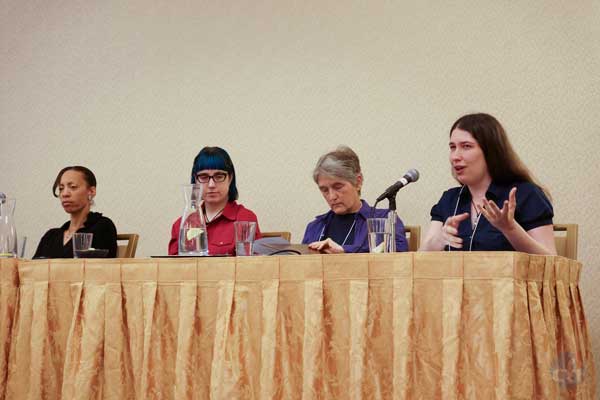 (RNS) As skeptics, atheists and humanists prepare to gather for their largest meeting in Las Vegas this weekend, attendance by women is expected to be down significantly.

Officials for The Amazing Meeting, or TAM, said Wednesday (July 11) that women would make up 31 percent of the 1,200 conference attendees, down from 40 percent the year before. A month before the conference, pre-registration was only 18 percent women, organizers said.

The explanations are many -- the bad economy, that women, as caregivers, are less able to get away, and that more men than women identify as skeptics, whose worldview rejects the supernatural and focuses on science and rationality.

But in the weeks preceding TAM, another possible explanation has roiled the nontheist community. Online forums have crackled with charges of sexism in TAM’s leadership and calls for the ouster of D.J. Grothe, the male president of the James Randi Educational Foundation, TAM’s organizer. In June, Rebecca Watson, a skeptic blogger and speaker, canceled her TAM appearance because, she said on her blog, she does “not feel welcome or safe.”

Other nontheists -- both male and female -- have shared stories of unwanted sexual attention at nontheist gatherings, including propositions for sex and unwelcome touching. Chatter has ranged from calls for more women to attend nontheist events to personal attacks on prominent female skeptics for discussing harassment. Meanwhile, two more skeptic/feminist bloggers announced they will not attend TAM.

The debate has had two major impacts -- a call for cooler tempers and the immediate implementation of sexual harassment policies by all of the major nontheist organizations, both national and regional.

No one is suggesting that all nontheist events are unsafe for women. But the controversy has members of the nontheist community, which prides itself on its embrace of rational thinking, asking whether they have a sexual harassment problem. And if so, what should be done?

“We are a small movement, so it might be very important for some men and women to find a partner who shares their beliefs,” said Maggie Ardiente, director of development for the American Humanist Association, which recently adopted a sexual harassment policy. “That does not mean sexual attention, when it is clearly rejected, is allowed. We need to be clear that these events are a great way to meet people, but there are appropriate ways to conduct yourselves. There are common-sense ways to address this for both men and women.”

This is not the first time the skeptic community has struggled with sexual harassment charges.

Last year, at another skeptic conference, Watson said she was approached late at night in an elevator by a man she believed was seeking sex. When she blogged about it, the “atheosphere” erupted in comments, both supportive and negative. British biologist Richard Dawkins, the best-selling author of “The God Delusion,” wrote that Watson should “stop whining” and “grow a thicker skin.”

The current hullabaloo can be traced to May’s Women in Secularism Conference, a first-of-its-kind gathering about nontheist women. On a panel examining feminism and nontheism, Jennifer McCreight, an atheist blogger, said women speakers at nontheist events warn each other privately about male speakers who make unwanted sexual advances. (Left to right) Sikivu Hutchinson, Rebecca Watson, Ophelia Benson and Jennifer McCreight speak on a panel about feminism and atheism at the Women in Secularism Conference in May 2012.

“They brought up a concern about harassment at conferences and I was not aware of that problem,” said Ron Lindsay, president of the Center for Inquiry, a humanist-skeptic group that organized the women’s conference. “Maybe I should have been. But once I became aware of that concern it wasn’t that difficult to come to a decision that we should have a policy in place to deal with that.”

CFI unveiled its policy earlier this month. American Atheists, American Humanist Association, and several large regional groups have also announced policies in the last few weeks. Most organizations had sexual harassment policies covering their employees and workplaces, but the new policies are aimed at non-employee attendees at special events.

As these groups and others unveiled their policies, members of the skeptic community asked whether TAM had one in place.

And that’s where things got ugly. In an appeal to assure women that TAM is welcoming and safe, Grothe made comments that upset some in the community. They accused him of underplaying, and even ignoring, reported harassment at past meetings, and of “blaming the victims” of the alleged incidents. Grothe apologized to Watson on her blog, Skepchick.

Asked to comment for this story, Grothe said he stood by his online remarks.

Those remarks continue, “I do not deny that there is a problem with sexism at atheist or skeptics conferences, nor any of the accounts blogged about in general terms by women who have attended TAM or similar kinds of events, but I would appreciate if such reports were balanced with an acknowledgment of the great effort the JREF goes to ensuring that TAM is a safe and welcoming environment for women.”

This year, TAM has hired an outside consultant to deal with harassment incidents. And TAM is notable among nontheist conferences in that roughly half of its speakers are women, including keynote speaker Carol Tavris, a social psychologist. Many skeptic women say they have no plans to abandon the conference or the broader nontheist community.

“We may not be able to ever completely solve misogyny online but we can absolutely do a better job ensuring that our physical events are welcoming and safe spaces for women and minorities than we have been,” said Amy Davis Roth, a longtime skeptic who has helped raise almost $8,000 for grants to send 22 women to this year’s TAM.

“Anti-harassment polices are a good start because it sends the message that event organizers want everyone to feel safe and that harassment will not be tolerated by our community,” she said.