(RNS) Amid a battle with President Obama over a new contraception mandate, the nation's Roman Catholic bishops are promoting natural family planning -- but will their flock take heed?

When the Obama administration in January announced that employers will have to provide contraception coverage to their employees, U.S. Catholic bishops took the lead in fighting the mandate.

Allied with other denominations, the Catholic hierarchy has organized an energetic, nationwide effort to overturn this new federal rule. The Catholic Church calls birth control a sin, even as many Catholics practice it.

The bishops are hoping to change that with their Natural Family Planning Awareness Week, an annual campaign that begins this Sunday (July 22). It’s the church’s only acceptable form of birth control, even as many sexuality educators consider it relatively unreliable.

Natural Family Planning Awareness Week, then, may provide a window into a church teaching that is helping to drive the most serious standoff between the church and the federal government in decades.

Even the bishops acknowledge that the church’s efforts aren’t winning many adherents to natural family planning, by which a couple charts changes in a woman’s body to determine when she is likely to be fertile.

A 2011 survey shows that just two percent of American Catholic women at risk of unintended pregnancy rely on the method. And an overwhelming majority of U.S. Catholics reject the church's ban on artificial birth control.

“Sadly, the majority of Catholics still do not know about Church teachings on married love nor understand why the Church considers artificial contraception immoral,” said Bishop Kevin C. Rhoades of the Diocese of Fort Wayne-South Bend. 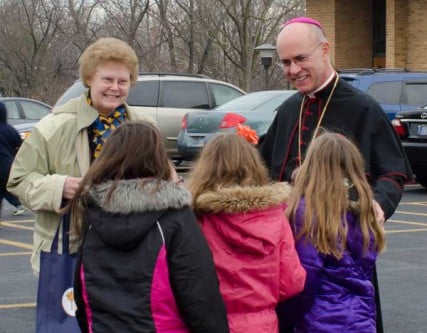 Bishop Kevin Rhoades of Fort Wayne-South Bend, Indiana and Sister Kathleen Kneuven speak with students in the parking lot of St. Jude Catholic Church in Fort Wayne. Bishop Rhoades is chairman of the Committee on Laity, Marriage, Family Life and Youth of the U.S. Conference of Catholic Bishops, which is sponsoring Natural Family Planning Awareness Week.

“This, tragically, is due to inconsistent education and formation since 1968. Over the last 30 years, we have been striving to correct the situation,” said Rhoades, who chairs the Committee on Laity, Marriage, Family Life, and Youth of the U.S. Conference of Catholic Bishops.

The birth control ban was codified in Pope Paul VI's 1968 encyclical, Humanae Vitae, "On Human Life."  The Catholic Church continues to strive -- mostly alone. It stands as the only major religious denomination in the nation to oppose what it considers “artificial” contraception.

Conservative Protestant churches that ally with the bishops against the mandate reject the requirement that their health plans include contraception coverage. But that’s different than rejecting contraception in principle -- a question that for them, as for the vast majority of Americans, seems to have been settled decades ago. Even for many Orthodox rabbis, there is far more leeway on contraception than the Catholic Church allows.

Humanae Vitae, on the other hand, was written as oral contraceptives came into widespread use. A papal commission on the subject suggested that at least some forms of contraception might be deemed acceptable. But as the papal encyclical makes clear, none are sanctioned except natural family planning.

As Paul VI wrote, “an act of mutual love which impairs the capacity to transmit life which God the Creator, through specific laws, has built into it, frustrates His design which constitutes the norm of marriage, and contradicts the will of the Author of life." While it prohibits birth control in general, Humanae Vitae allows for natural family planning, though the encyclical does not use the phrase. Humanae Vitae inspires Bethany Meola, 27, who works in Washington, D.C., for the USCCB committee headed by Bishop Kevin C. Rhoades. Married a little more than a year ago, Meola and her husband practice natural family planning and are open about their hopes that it will help them conceive.

Humanae Vitae inspires Bethany Meola, 27, who works in Washington, D.C., for the USCCB committee headed by Rhoades. Married a little more than a year ago, Meola and her husband practice natural family planning and are open about their hopes that it will help them conceive.

“It helps us to recognize and appreciate both dimensions of sexual love,” she said.

“The act that unites my husband and me in an incomparably intimate way is also the act through which we will welcome a child into our family, God willing, and become father and mother together. In other words, practicing NFP has helped us to grow in awe and wonder at the amazing gift and power of our sexuality.”

Meola is on one end of the spectrum of American Catholics in her acceptance of this church teaching. But for most Catholics, said Jon O’Brien, president of Catholics for Choice, the church’s rejection of birth control makes little sense in their modern lives.

When Catholics go to their church for premarital counseling, and it’s time for the natural family planning discussion, “most people just look at their shoes, pass the time and hope that the hour goes very quickly,” said O’Brien.

“And then we get back to our real lives where we use condoms, and we use pills and we contracept as best we can in good conscience,” he said.