BIRMINGHAM, Ala. (RNS) Episcopal Bishop Kee Sloan of Alabama voted in favor of his church's new ritual for blessing same-sex unions — but he won't allow priests in his diocese to perform it.

“For the time being, I will not give permission,” Sloan said. 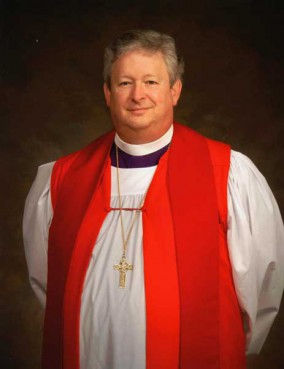 Episcopal Bishop Kee Sloan of Alabama voted in favor of his church's new ritual for blessing for same-sex unions – but he won't allow priests in his diocese to perform it.

The blessing of same-gender unions is still too divisive an issue for Alabama, he said.

“It’s not good at this time in this place,” Sloan said. “I’m trying to avoid any further division.”

Episcopalians overwhelmingly approved the new rite for same-sex couples July 10 at the denomination's General Convention. Bishops do not have to allow them, however, and about 10 active bishops have said they will not. The denomination has 110 dioceses in all.

The Rev. Frank Limehouse, dean of the 3,400-member Cathedral Church of the Advent, Birmingham’s largest Episcopal church, said his church will not “bless any sexual activity outside of a marriage between one man and one woman.”

“The Bible is clear about this,” Limehouse wrote on his church's website. “If anyone who declares the Bible teaches otherwise, then I wouldn’t doubt his or her sincerity, but I would have to question their training in biblical interpretation.”

Advocates for same-sex blessings were puzzled that Sloan supported the rites, but won’t allow them in his diocese.

“All of us striving for full inclusion are disappointed that he’s not allowing Alabama to move forward with the national church,” said Brad LaMonte, former Southeast regional vice president of Integrity, which promotes gay rights in the Episcopal Church.

“He worked on the committee that developed the rite,” LaMonte said. “It’s bizarre that he’s not allowing it in Alabama.”

Sloan said he serves both the national church and a local diocese.

While Alabama is not ready to practice same-sex blessings, he wants further conversation and study of the issue, Sloan said.

He said that states where same-sex civil unions are legal may be more ready than Alabama to proceed with blessing such couples.

“What we’ve done is continue a conversation,” Sloan said. “It will continue to go for a long time.”

Sloan said same-sex blessings may eventually be allowed in Alabama.

“I don’t have a timetable in mind,” he said. “I foresee that that’s a possibility.”

(Greg Garrison writes for The Birmingham News in Birmingham, Ala.)

News
Study: Biden still leads among Latino Christian voters, but Trump’s support has grown
News
Alabama officials sued over voter registration form requiring ‘so help me God’ vow
News
Alabama governor apologizes to ’63 church bombing survivor
Martini Judaism
COVID has led us all into sin
News
‘Your fight is my fight’: Latino clergy and faith leaders rally behind Black Lives Matter
© Copyright 2020, Religion News Service. All rights reserved. Use of and/or registration on any portion of this site constitutes acceptance of our User Agreement and Privacy Policy, Privacy Statement and Cookie Notice. The material on this site may not be reproduced, distributed, transmitted, cached or otherwise used, except with the prior written permission of Religion News Service.