(RNS) Back in in 1993, Snoop Dogg scored a huge hit with the hip-hop anthem “What’s My Name?” Announcing his conversion to Rastafarianism on Monday, the rapper unveiled a new answer to that lyrical question.

“I want to bury Snoop Dogg and become Snoop Lion,” he said at a press conference.

So, did the onetime gangsta rapper have to drop the “d-o-double-g” when he became a Rasta? Yes, and no, said Ennis Edmonds, a scholar at Kenyon College and an expert on Rastafarianism.

The religious movement doesn’t require converts to change their names. But the faith was born in Jamaica, where calling someone a dog is deeply insulting, Edmonds said.

“Rastas would probably see calling yourself a dog as an indication of lack of self-knowledge,” Edmonds said. It expressed how the corrupt world — Babylon, in Rasta theology — had distorted the rapper's true spiritual nature.

Little surprise, then, that a Rasta priest in Jamaica shook his head and said “no more” when the man born as Calvin Broadus introduced himself as Snoop Dogg.

The priest, a member of the most traditional branch of Rastafarianism, Nyabingi, rechristened the rapper Snoop Lion. The new documentary, “Reincarnated,” captures the rapper's conversion in Jamaica last February.

Unlike dogs, lions hold a place of pride in Rasta theology, explained Edmonds, author of a forthcoming history of the religious movement.

Rastafarianism holds that the late Ethiopian Emperor Haile Selassie was not only the messiah, he also descended from King Solomon and the Queen of Sheba. According to the biblical Book of 1 Kings, the two rulers met briefly and seemed to hit it off.

The lion was the symbol of Solomon’s Tribe of Judah (Christians see Jesus as the lion of Judah). Bob Marley, the reggae star and most famous Rasta, sang often of the “lion of Zion,” referring to Selassie.

Speaking of Marley, Snoop Lion also said that he considers himself a reincarnation of the late musician. Edmonds said that some Rasta theology bears the influence of Hinduism, in which reincarnation is a core belief.

Judging from his lengthy arrest record for marijuana possession, it seems Snoop Lion is already acquainted with a chief Rasta sacrament. Smoking weed, or ganja, as many Jamaicans call it, creates peaceful feelings and communal harmony, Rastas believe.

It’s also an aide to introspection. Just as Buddhists sit in meditation to uncover their “Buddha nature” and Hindus seek to unite their soul with Brahman, Rastas believe a divine essence sits at the core of every human being.

“Marijuana helps them break through the mental boundaries that Babylon has placed upon them and return to their sense of self,” Edmonds said.

Or, as Snoop Lion said on Monday, “I feel like I’ve always been Rastafari, I just didn’t have my third eye open.” 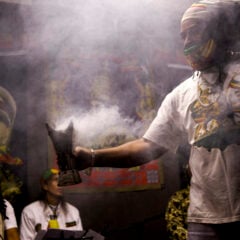 Religion Hub
In Ghana, Rastafarian high schooler fights to keep his hair
Follow us on Facebook!
Submit your photos to RNS