(RNS) Mitt Romney says in a new interview that one of the reasons he’s distressed about disclosing his tax returns is that everyone sees how much money he and his wife, Ann, have donated to his Mormon church, and that’s a number he wants to keep private.

“Our church doesn’t publish how much people have given,” Romney tells Parade magazine in an edition due out Sunday (Aug. 26). “This is done entirely privately. One of the downsides of releasing one’s financial information is that this is now all public, but we had never intended our contributions to be known. It’s a very personal thing between ourselves and our commitment to our God and to our church.” 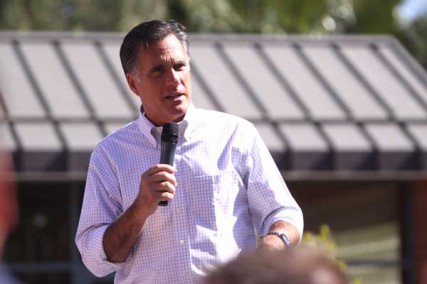 Romney has released his 2010 tax returns in his White House campaign and, so far, a summary of last year’s tax information. But despite pressure from Republican opponents in the primaries and President Obama’s re-election campaign, Romney has refused to disclose more.

While it may not be a major reason, Romney says disclosing his charitable donations isn’t something he wants to do.

Members of the Church of Jesus Christ of Latter-day Saints are encouraged to donate 10 percent of their gross income to the faith, and Romney’s disclosure early this year shows he did just that and also forked over more through his family charity.

Romney pulled in more than $40 million in 2010 and 2011, his campaign reported, and paid about $4.1 million to the LDS church. That’s in addition to about $4.8 million his Tyler Charitable Foundation donated to the faith.

Over time, the Romneys, among the wealthiest Mormons, with a net worth of around $250 million, have likely doled out millions to their Salt Lake City-based faith. The LDS church has been referred to as one of the wealthiest in the world.

“There needs to be a certain degree of privacy,” Chaffetz says. “Who he gives money to personally should be his business.”

Chaffetz also says Romney shouldn’t have to make his donations an issue.

“It creates a tension for those who maybe received the generosity of those donations,” Chaffetz says. “That doesn’t necessarily need to be part of this campaign.”

While Mormons are asked to give 10 percent of their income to the church, officials do not ask for tax forms or pay slips to prove the amount is correct. Funds are used to build and maintain church buildings and temples as well as for its educational, missionary and welfare programs worldwide.

University of Utah political scientist Matthew Burbank says Romney may have a point about disclosing his finances since he never intended to make his LDS donations public.

“I can understand why you wouldn’t want that information out there,” Burbank says.

However, the professor points out, if Romney were to release more years of tax returns, journalists and opponents would likely be more interested in Romney’s wealth and where he parks his money.

“The amount of money given to the church is probably not going to attract the most attention,” Burbank says. “People will look at that and say that’s nice but it’s not likely to draw a lot of comment or concern.”

Romney also jokes in the Parade interview about the high cost of paying tithes, though Ann Romney notes how important it is to them.

“I love tithing,” Ann Romney tells the magazine. “When Mitt and I give that check, I actually cry.”

“So do I,” Mitt Romney adds, “but for a different reason.”

Ann Romney says tithing is an indication of how much faithful followers trust God and a way to show one’s love of the principle of sacrifice.

“And it teaches us not to be too, too tied to the things of the world,” she says. “And it is a very good reminder of how blessed we really are, and most of those blessings do not come from a financial source, but from the power above.”

Mitt Romney also refers to his time as bishop of a Mormon ward in Massachusetts when the interviewer asks how he, as a wealthy person, can identify with people who are just scraping by or living on food stamps.

“Each of us faces struggles of one kind or another,” Romney says. “Our life was not characterized by financial stress as much as it was by health issues. I served as a pastor of a congregation and saw people with various challenges and did my best to help them. I believe my experience in the private sector, the voluntary sector, and government has helped teach me what it takes to help people with different types of challenges.”

Parade is included in The Salt Lake Tribune on Sunday. The magazine says it will cover Obama in a coming issue.