(RNS) Americans are almost evenly divided in how they view Muslims, according to a survey released Thursday (Aug. 23) by the Arab American Institute in Washington. 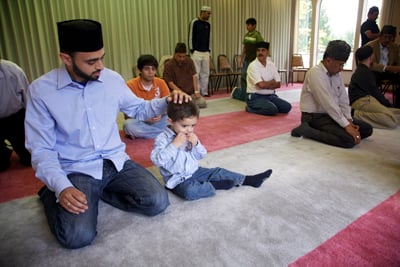 Harris Zafar and his son, Rohan, 2, participate in the Friday prayer service at the Rizwan Mosque in Portland, Ore.. Ahmadiyya is a Muslim sect which emphasizes peace and is a target for persecution in Pakistan.

“The American Divide: How We View Arabs And Muslims,” found that 41 percent of Americans had unfavorable views of Muslims, compared to 40 percent who held favorable views.

That’s an improvement from 2010, when another Arab American Institute survey found that 55 percent of Americans viewed Muslims unfavorably, compared to 35 percent with favorable views. The latest poll surveyed 1,052 people between August 15-16.

Professor Jack Levin, co-director of the Center on Violence and Conflict at Northeastern University, attributed the spike in anti-Muslim sentiment in 2010 to protests against a proposed Islamic center near Ground Zero. “That effect has been fading over time,” Levin said.

In 2003, 47 percent of Americans viewed Muslims favorably compared to 32 percent who did not.

More than half of Republicans viewed Muslims and Arabs in general unfavorably in the latest poll, though their opinions improved when asked about Muslim Americans and Arab Americans in particular.

While Muslims were generally viewed more unfavorably than other faiths, they did fare better than some groups among younger demographics. For example, 34 percent of 18-29-year olds viewed Muslims unfavorably, 37 percent viewed Mormons unfavorably, and 35 percent had unfavorable views of evangelicals.

“Young people have traditionally been more liberal in their religious and political thinking,” Levin said.

Nearly a quarter of Americans had unfavorable views of Sikhs, compared to 35 percent of Republicans.

The report, which had a margin of error of 3.1 percent, also found that 42 percent of Americans thought Muslims could do a good job in government, while 32 percent said they could not because their loyalty was suspect.

Nearly six in 10 Americans said they don’t know a Muslim compared to three in 10 who said they did, while the rest were unsure. People who knew Muslims were more likely to have favorable views of them.

The poll was conducted by JZ Analytics, a firm owned by John Zogby, brother of Jim Zogby, president of the Arab American Institute.