DAVIESS COUNTY, Mo. (RNS) Jose Rangel got out of his minivan and stretched before helping his elderly mother from the passenger seat. Rangel's wife and children spilled out of the side door into the manicured parking lot. What could be a scene from any American family's summer visit to a state park was actually a spiritual pilgrimage. The Rangels were at Adam-ondi-Ahman, a mysterious plot of land 70 miles north of Kansas City that is owned and maintained as a sacred site by the Church of Jesus Christ of Latter-day Saints.

“This place is very important to the church,” said Rangel, who had brought his mother to the site while she was visiting from Mexico. “When Jesus Christ comes for the second time, this is where he's going to come.”

“And,” Rangel's daughter Nefertiti, 15, added, “this is where it all started.”

To non-Mormons it sounds odd that a bluff in northwestern Missouri, on a bend 124 feet above the Grand River, represents to 15 million faithful both the beginning and end of human time. It may also be a surprise to some Mormons. 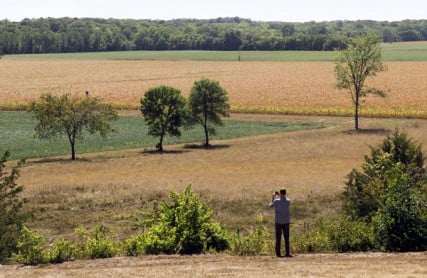 Gage Herbst, 26, from Alpine, Utah, took pictures of the valley called Adam-ondi-Ahman Friday August 17, 2012, near Gallatin, Missouri. Herbst was on his way to school in Akron, Ohio. The valley is historic and sacred to Latter-Day Saints. “I've heard a lot about it and wanted to see it,” said Herbst. “It will be a very important place someday,” he said, referring to the church's belief that this is the site where Jesus will return to earth.

Adam-ondi-Ahman (adam-on-die-AH-min) is a part of the faith that most Mormons don't encounter in their everyday lives or incorporate into their regular worship.

Yet, for believers such as the Rangel family, Adam-ondi-Ahman also fits in a small but significant way into their faith's broader theology.

Mormons believe that in June 1838, Smith received a revelation from God that this Mormon farming settlement of between 500 and 1,000 was to be called Adam-ondi-Ahman — a translation from “the original language spoken by Adam,” according to the church, that means “Valley of God, where Adam dwelt.”

Church doctrine makes reference to the place as the site where Adam and Eve went after God banished them from the Garden of Eden. It's also regarded as a gathering place for the faithful at the Second Coming of Jesus Christ.

Author Brook Wilensky-Lanford said Smith's prophecy was best understood in the context of history. Mormons had repeatedly been pushed out of their settlements, and longed for a gathering place.

“It was about finding the perfect place, and about exile from that place.”

And yet, many Mormons believe this plot of land has been used by outsiders to cast Mormonism as weird. There's even a Missouri Garden of Eden reference in the hit Broadway musical “The Book of Mormon,” which pokes gentle fun at elements of the faith.

Portrayals of Mormonism that gravitate toward the edges of the faith's doctrine are rooted in human nature, some scholars say. We are more drawn to the unusual and exotic than to the normal and bland. A Missouri Garden of Eden is more interesting than traditional belief in Jesus Christ.

“Such a focus distorts, by replacing what is essential to the faith with what is tangential,” said Terryl Givens, professor of literature and religion at the University of Richmond and a Mormon. “And by distorting, you discredit.”

Adam-ondi-Ahman is in such a remote part of northwestern Missouri that getting there requires GPS coordinates. Past Nalle's Feed & Grain, MFA Agri Services and Gallatin Truck & Tractor, a tiny country road leads to a white picket gate. Inside, the grounds are meticulously groomed — neat gravel roads with symmetrically planted trees on both sides lead to an overlook of the valley below.

The site's plaques mention Adam and Eve, only to say that Smith named the place after Adam. The church leaves it up to Mormons to teach their own children that it is in this valley that a future gathering of Adam and his righteous descendants will meet with Jesus Christ during the last days.

There are no missionaries or guides at Adam-ondi-Ahman. On a typical summer afternoon, hours can pass with no visitors. But Mormon families do trickle through, often as part of a pilgrimage to a host of nearby sites that mark the significance of western Missouri in Smith's cosmology, or historical sites of interest in Mormonism's bloody history here.

For families such as the Rangels, the prophecies of Adam-ondi-Ahman, while abstract, are valid. They speak to the faith's foundational claim that Smith was the first of many modern prophets, who reopened communication with God, with visions of angelic messengers and new scripture such as the Book of Mormon.

For Mormons, this early period of the church — from Smith's first visions in New York to Brigham Young's trek to Utah — is sacred history, taught in Sunday school alongside biblical stories of Moses and the Exodus.

“It is the founding narrative of our faith, and it's used to shape lessons, to teach virtues and values, the same way Scriptures are used,” said Matthew Bowman, a religion professor at Hampden-Sydney College in Virginia. “And Adam-ondi-Ahman really does fit into that.”

Opinion
Now’s the time to hew to your faith — by doubting your faith
Follow us on Facebook!
Submit your photos to RNS