(RNS) As Mitt Romney has moved to the center in an effort to overtake President Barack Obama in the campaign’s homestretch, he has by necessity muted – or even muddied – his previous opposition to abortion rights, a shift that has left some abortion foes aghast. 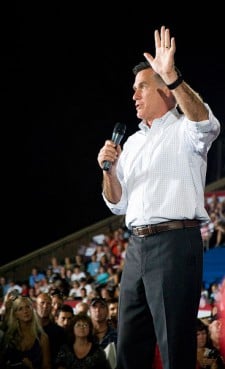 But veteran anti-abortion leaders say they are confident that Romney remains committed to their agenda and, in the final weeks before the Nov. 6 vote, they are busy trying to keep rank-and-file activists from pouncing on the Republican candidate’s ambiguous statements. Their fear? That going after Romney could prompt defections and cost the GOP a surprisingly strong shot at winning the White House.

“If it’s hurting him to bring up the abortion issue, then I’m OK if he doesn’t,” said Bradley Mattes, head of the Life Issues Institute in Cincinnati.

“I think our movement has to be savvy enough to understand how political campaigns are run,” he said. “And if they don’t, now would be a good time to have that revelation.”

Several other anti-abortion leaders echoed Mattes, saying that abortion opponents around the country have been coordinating their strategy to reflect a political realism that is not often associated with the prophetic tenor of anti-abortion activists. Romney, they say, is the best they will get, and he’s not really so bad, especially given the alternative.

“We don’t necessarily need in public office someone who is going to be a crusader on this issue. We just need someone who’s going to make it easier for us to do our job,” said the Rev. Frank Pavone, head of Priests for Life.

“We understand why a candidate wouldn’t make this their leading issue,” Pavone said, adding that he was comfortable with Romney’s positions. “I’ve found that the more I really try to sincerely understand how politics and government work, the more I’m OK with what might be seen as reason for criticism or concern. It’s just the nature of the way it works.”

Marjorie Dannenfelser, head of the Susan B. Anthony List, said she gets “outrageous” emails every day saying “it is your obligation to expose Romney’s weaknesses.”

But she rejects those demands as “off-the-charts unwise,” telling her followers that they need a healthy dose of political pragmatism. Romney isn’t perfect, she said, but Obama is far worse, and abortion opponents “have the power to make Romney follow through on his commitments” – if he is elected.

If anti-abortion groups can in fact preach that message of political realism, it could prove crucial for Romney, who has long struggled to present a clear position on abortion and reproductive rights.

As governor of Massachusetts a decade ago, Romney strongly supported abortion rights and said he was “effectively pro-choice.” The health care plan he shepherded into law, which was a model for Obama’s 2010 national reform, even included taxpayer funding for abortions.

In 2005, as Romney began his quest for the Republican presidential nomination, he announced that he had changed his views and was now “pro-life.”

But many abortion opponents were never fully convinced of Romney’s conversion, and they blasted Romney throughout the GOP primaries as being insincere. He responded by pledging to work to overturn Roe v. Wade, defund Planned Parenthood, and to take other steps demanded by anti-abortion groups.

Since winning the nomination and moving to the general election, however, those statements appeared to hurt him with key voting blocs – women, in particular, but also independents and young adults.

So several weeks ago, facing an uphill slog in the polls, Romney and his running mate, Paul Ryan, a Catholic, began to de-emphasize issues like abortion and gay rights in order to win over some of those voters. When they did discuss abortion, it was in terms that seemed to soften or even contradict Romney’s earlier positions.

In late August, for example, Romney dismayed some hard-line abortion foes by sharply denouncing Missouri GOP senate candidate Todd Akin for his controversial remarks about rape and abortion. Romney followed that by distancing himself from the Republican platform that bars abortion in all cases, adding that he viewed the Supreme Court’s 1973 Roe decision legalizing abortion as “settled.”

Then on Oct. 9, Romney told The Des Moines Register that he would not push any abortion-related legislation if elected – which seemed to contradict a column he wrote in National Review last year detailing the anti-abortion legislation he would support.

And this week, the Romney campaign released a new ad aimed at women voters that stresses Romney’s support for contraception and provisions that would allow women to have legal abortions.

Romney followed that up in Tuesday (Oct. 16) night’s debate with President Obama by declaring that “Every woman in America should have access to contraceptives.” He also said employers should not be able to bar women from receiving such insurance, an apparent reversal of his previous position on that hot-button topic.

While Romney’s campaign has often issued follow-up clarifications to reassure social conservatives of Romney’s underlying commitments, the initial impression of a more moderate Romney endured – and many abortion opponents who are passionate about their issue took offense.

“I’m running out of fingers and toes to count the number of positions he has taken on abortion,” Steve Deace, a conservative radio host in Iowa, told The Washington Post. “This is someone who does not have a deep or abiding position on this issue either way, and I think what it does is it puts pro-life leadership in America in a difficult position. I don’t know anybody in the pro-family movement who is not for sale who trusts him.”

On Wednesday, Anna Williams at the conservative journal First Things said she was nonplused by Romney’s comments on contraception. “I remain nervous, for there appears to be more than one Mitt Romney,” Williams wrote.

Others argue that Romney has simply misstated his views or been quoted out of context. “No alarm bells here,” Tony Perkins, president of the anti-abortion Family Research Council, told Talking Points Memo last week after Romney’s Iowa remarks.

Romney’s faith-based supporters also say that their political pragmatism should be informed by a sense of charity as well.

“It’s not just saying, ‘Suck it up and move on – vote for him,’” said Dannenfelser. “Mitt Romney is a human being, and it’s important to be an asset and a friend to him, to say the best possible things about him.”