NEW ORLEANS (RNS) In a sometimes harshly worded ruling, a federal appeals court on Tuesday (Oct. 23) smacked down the Louisiana funeral board's continued attempts to prevent a group of monks from St. Joseph Abbey from selling their hand-crafted caskets. 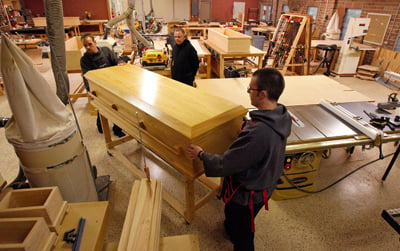 “The great deference due state economic regulation (does not require) courts to accept nonsensical explanations for naked transfers of wealth,” wrote Judges Patrick Higginbotham, Catharina Haynes and Stephen A. Higginson of the 5th U.S. Circuit Court of Appeals. “We insist that Louisiana's rules not be irrational.”

The appellate judges sent the case to the Louisiana Supreme Court, refusing to consider the funeral board's appeal of a lower court ruling that said it was unconstitutional for the state to give funeral directors exclusive rights to sell caskets.

“Simply put, there is nothing in the licensing procedures that bestows any benefit to the public in the context of the retail sale of caskets,” U.S. District Court Judge Stanwood R. Duval Jr. ruled in July 2011. “The license has no bearing on the manufacturing and sale of coffins. It appears that the sole reason for these laws is the economic protection of the funeral industry,” which he wrote is not “a valid government interest.”

After Hurricane Katrina destroyed the abbey's timberland outside Covington, La., a longtime a source of revenue, the monks decided to sell their handmade caskets as a way to supplement their income. The abbey invested $200,000 in St. Joseph Woodworks and sold two types of caskets, “monastic” and “traditional,” priced at $1,500 and $2,000 respectively. 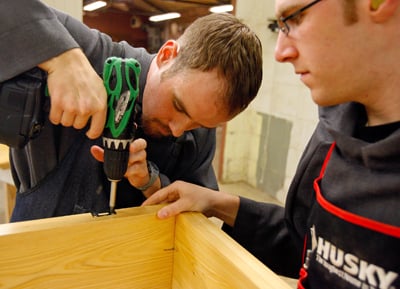 “To be sure, Louisiana does not regulate the use of a casket, container, or other enclosure for the burial remains; has no requirements for the construction or design of caskets; and does not require that caskets be sealed,” the appeals court ruled.

“Individuals may construct their own caskets for funerals in Louisiana or purchase caskets from out-of-state suppliers via the internet. Indeed, no Louisiana law even requires a person to be buried in a casket.”

The monks did not offer funeral services, prepare the body for burial or participate in funerals, except as pastors.

In response, the Louisiana Board of Embalmers and Funeral Directors sent the monks a cease-and-desist letter, threatening thousands of dollars in fines and up to 180 days in prison based on a law prohibiting the sale of coffins without a funeral director's license.

In their Tuesday ruling, the appellate judges took aim at that regulation, stating its sole purpose is to restrict the intrastate sales of coffins “to funeral homes.”

“There are no other strictures over their quality or use,” the appeals court said. “The district court found the state's scheme to be the last of its kind in the nation. The state board had never succeeded in any enforcement actions against a third party seller prior to its effort to halt the abbey's consumer sales.”

Deacon Mark Coudrain, who manages the Abbey’s casket-making project, said, the case is as much about “economic liberty” for the monks as it is “religious liberty.”

“The court recognized that the U.S. Constitution doesn’t let the government prevent monks or anyone else from earning an honest living unless there is a really good reason, the kind of reason that was nowhere to be seen here,” he said in a statement from the Virginia-based Institute for Justice, which is representing the monks. Religion Hub
Sisters in Florida condo collapse buried in same coffin
Follow us on Facebook!
Submit your photos to RNS