TOLEDO, Ohio (RNS) While the presidential candidates have been discussing values and downplaying their personal religious beliefs, faith is front and center in the race for Ohio’s 5th Congressional District. 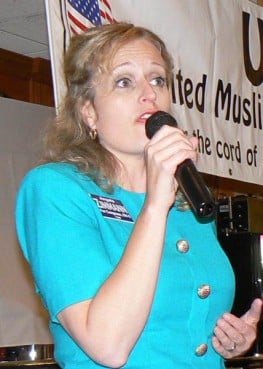 The Rev. Angela Zimmann is an ordained Lutheran minister and is believed to be the only female minister running for Congress this year. *Note: This image is not available to download.

Democratic challenger Angela Zimmann is an ordained Lutheran minister — and is believed to be the only female minister running for Congress this year. The incumbent, Republican Bob Latta, is a Catholic who attends congressional prayer meetings and promotes the core values of “faith, family and community.”

“A person without a religious faith can still be a person of integrity,” Zimmann said in an interview, “so I wouldn’t say that if you don’t have faith you don’t have values. But I know for myself my faith influences my values.”

“Being from the Christian faith, our values are to care for the needy. The Bible talks about helping the elderly and the widows, and I see that as an analogy for helping anyone who doesn’t have their needs met.”

Zimmann, 39, is the pastor of Trinity Evangelical Lutheran Church, a small church just over the Ohio line in Riga, Mich.

To the best of her knowledge, she said, she is the only female pastor seeking federal office this year. (Researchers at Congressional Quarterly and the Pew Forum on Religion & Public Life said they knew of no other female ministers running for Congress, but could not say definitively.)

The Republican-leaning district in northwest Ohio hasn’t been represented by a Democrat since 1939.

Zimmann, ordained in the Evangelical Lutheran Church in America, spoke with Bishops Donald Kreiss of southeast Michigan and Marcus Lohrmann of northwest Ohio before announcing her candidacy.

“It was all conversational, not hierarchical,” she said. “Both bishops were supportive and said the church should be more involved in the public forum and listening and participating in the process.”

With her church located in Michigan and her political campaign in Ohio, Zimmann’s church and state are literally separate. But she talked with church members before running for office.

“It’s a pretty conservative little congregation,” she said, with about 100 people on the rolls and Sunday attendance averaging between 40 and 50.

“There are more registered Republicans than Democrats for sure, but they’re pretty open and affirming. We’ve had conversations with the parishioners and many of them said, ‘We’ll vote for you even though we’re Republicans because you are an independent thinker’.”

But politics is not a big topic at Trinity.

“We don’t talk about it on Sunday morning. We’re there to worship and that’s what we do,” she said.

Zimmann, who has a doctorate degree in rhetoric, gave up her job teaching writing at Bowling Green State University to run for Congress. But she has kept her part-time job at Trinity.

“I have not missed a Sunday,” she said. “And my plan, and my bishop’s plan, is that even if I’m elected I will continue as their pastor because most weekends I’m going to go to church anyway.”

She has a ready stand-in if there’s a scheduling conflict: her husband, Martin Zimmann, is also an ordained ELCA minister.

If elected, she said she will be on guard to not let politics corrupt her faith.

“I’m not going to say, ‘Oh no, I’m incorruptible. I’m above that.’ I think that’s when we become most susceptible,” Zimmann said. “Absolutely I’m worried. I pray. I’ll be on guard. I’ll be asking people around me to watch, monitor, be truthful and hold me accountable.”

Latta, 56, said he’s “a firm believer that you’ve got to have a true faith value in everything that you do. It starts with faith in God, family and country.” His father, former U.S. Rep. Del Latta, is a member of the Churches of Christ and his mother is a Catholic.

The three-term congressman serves as an usher at St. Thomas More University Parish in Bowling Green and attends congressional prayer breakfasts in Washington on Thursdays whenever possible.

“You have got to know where your principles come from. If you don’t have principles to begin with, you can’t do this job,” he said.

“You’ve got to have your foundation to do what you believe in to be a good representative.”

(David Yonke is the editor of Toledo Faith & Values)