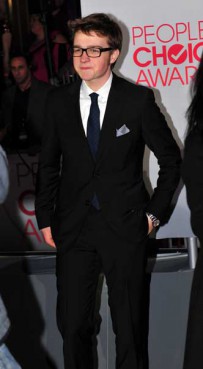 Angus T. Jones on the red carpet at the 38th People's Choice Awards on January 11, 2012, at the Nokia Theatre in Los Angeles, California. The 'Two and a Half Men' actor -- the ?half? in the sitcom?s title -- says in a new online testimony that he?s become a Seventh-day Adventist and loathes the ?filth? produced by his raunchy show.